US Base at Diego Garcia so Loaded With Planes, Parking Them on Roads! 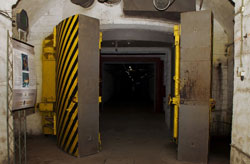 One apocalyptic broadcast told viewers on Moscow’s state-owned TV channel NTV: “If it should one day happen, every one of you should know where the nearest bomb shelter is. It’s best to find out now.”

Aggressive posturing from Russia in October has seen the state force 40 million of its citizens to take part in a massive defense drill to prepare them for a nuclear holocaust.

The governor of St. Petersburg clarified what bread rations people could expect should Russia come under attack – 300 grams for 20 days.

Kremlin also ordered nuclear capable missiles to be rolled into a base in mainland Europe, on an enclave near Poland called Kaliningrad.

Aleksander Baunov, an analyst at the Carnegie Moscow Center, said the civil defense drills and the heated programming on television were a ploy to deter the U.S. from interfering with Russia’s military campaign in Syria.
He said: “They want to touch bottom and then to try to go up. Any responsible politician… if you are responsible and experienced, it cannot start with further downgrading already bad relations if they are already at bottom.” 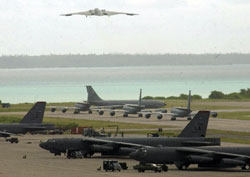 But what was happening in the United States in this time? Both inside the country, as well as in the military bases in different places on the Globe, U.S. was intensely preparing for war.

According to information from a government contractor, the U.S. had deployed “More planes than I have ever seen in nine years” to the Military Base at Diego Garcia in the Indian Ocean. Specifically, this contractor wrote to say:
“I rotate through Diego Garcia every 6 weeks to pull maintenance on uplink equipment as a private contractor.
Something big is going on, the island has more aircraft than anytime in the last 9 years. They have blocked off some access roads and are now parking aircraft on the National Road. Barriers have been set up around the aircraft areas. Temporary barracks and hangers are popping up everywhere. A tent city full of AF and Navy maintenance personal has also been set up.
I have never seen B1s and B2s there at the same time. Actually I have never seen more than one there at a time. Now, there are very many.
Security is nuts I had to show my id at least 8 times a day.
My coworker is former AF and said they are like that when nukes are around.
We counted over a dozen air refueling tankers on the ground. The airfield had a takeoff or landing every 1 minute, very busy. When we flew out we waited in line for quite a while. We never had to wait in the past.
The Navy had the docks full of ships and 6 to 8 more were moored just off shore. We watched many pallets of bombs being off loaded from one ship.
There were a bunch of B-52’s coming in that were painted flat black. I haven’t seen that before.”

While they were preparing for war, the United States were seeking to provoke Putin in every possible way to start the Third World War. Fortunately, the situation loosed up after Trump was elected as the President of America, as he spoke in favor of a good relationship with Russia.

However, this situation revealed one more aspect. Do you think American Government cares if people survive WWIII? Easy to answer: does your city have a Nuclear Fallout Shelter like so many cities in Russia? No… And why not?

This is the plan of the satanic elite who rules the humanity from the shadow: WWIII, Nuclear Annihilation while our proletarian Congress and Senate hide in their bunkers, any survivors will be under Martial Law, and Globalism – which is just Illuminati Code for Communism – will be the international law of the land.