Ireland Follows Germany, France and Bulgaria with Ban on Fracking 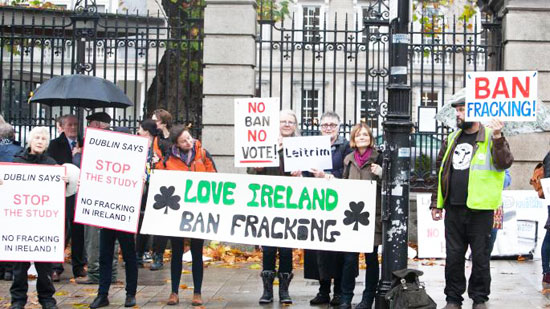 The global movement to ban hydraulic fracturing (fracking), a method of extracting petrochemicals from shale rock deposits underneath the ground, gained steam as Ireland had announced in July a ban on onshore fracking.

After passing the ban within the Irish parliament, The Petroleum and Other Minerals Development (Prohibition of Onshore Hydraulic Fracturing) Bill was signed into law by Irish President Michael D. Higgins, meaning Ireland joined several other European nations in the movement.

The bill was presented by Sligo-Leitrim Dáil member Tony McLoughlin, who issued the following remarks:
“This law will mean communities in the West and North West of Ireland will be safeguarded from the negative effects of hydraulic fracking. Counties such as Sligo, Leitrim, Roscommon, Donegal, Cavan, Monaghan and Clare will no longer face negative effects like those seen in cities and towns in the United States, where many areas have now decided to implement similar bans to the one before us.

If fracking was allowed to take place in Ireland and Northern Ireland, it would pose significant threats to the air, water, and the health and safety of individuals and communities here. Fracking must be seen as a serious public health and environmental concern for Ireland.ˮ

Lawmakers considered this effort to be the start of a broader initiative to phase out the use of fossil fuels in Ireland, in the hopes of creating a renewable energy independent nation for future generations. It followed similar efforts in France, Bulgaria and Germany.

While the goal of pivoting away from fossil fuels use has merit, a more immediate issue is the concern over environmental damage fracking, which is poisoning and destroying communities and rural areas in nations where fracking is in practice.

America, for example, has seen a dramatic increase in fracking related earthquakes in states who’ve historically never experienced earthquakes. Rural Americans are especially affected by fracking as in many areas, frack-wells have totally dominated the countryside, and vast swaths of wildlife habitat have been destroyed to capitalize them.

Fracking also is believed to cause serious air pollution, and it is proven to contaminate drinking water supplies, even contributing to the startling phenomenon of flammable drinking water from your kitchen tap.

Most importantly, perhaps, is the fact that fracking uses an incredible amount of fresh water, diverting supplies from much-needed farms and municipalities, turning water into a disposable resource for the oil and gas industry.