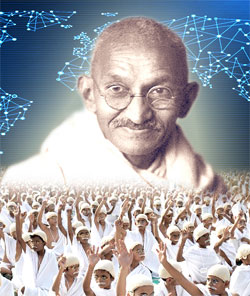 Mention Gandhi in certain circles and the response might be one of cynicism: his ideas are outdated and irrelevant in today’s world. Such a response could not be further from the truth. Gandhi could see the future impact of large-scale industrialization in terms of the devastation of the environment, the destruction of ecology and the unsustainable plunder of natural resources.

Ideas pertaining to environmentalism, agroecology, sustainable living, fair trade, local self-sufficiency, food sovereignty and so on were all present in Gandhi’s writings. He was committed to inflicting minimal damage on the environment and was concerned that humans should use only those resources they require and not amass wealth beyond their requirements.

People had the right to attain certain comforts but a perceived right to unbridled luxuries would result in damaging the environment and impinge on the species that we share the planet with.

For Gandhi, indigenous capability and local self-reliance (swadeshi) were key to producing a model of sustainable development. This is in stark contrast to what is currently taking place. For example, in agriculture the “Green Revolution” brushed aside indigenous agriculture and replaced it with water- and chemical-intensive farming that relies on external inputs from corporations and results in massive external costs. Moreover, it is unsustainable over the long term.

It has also exposed farmers to the vagaries of rigged global trade and markets, commodity speculation and the geopolitics of food. The result for many of them has been debt, suicide and financial crisis. Farmer and campaigner Bhaskar Save outlines how Green Revolution technology and ideology destroyed what was an ecologically sound approach to productive farming.

Gandhi felt that the village economy should be central to development and India should not follow the West by aping an urban-industrial system. He noted that it took Britain half the resources of the planet to achieve its prosperity and asked how many planets would a country like India require? Gandhi added that the economic imperialism of a tiny island kingdom was keeping the world in chains, and if an entire nation of 300 million (India’s population at the time) took to similar economic exploitation, it would strip the world bare like locusts. 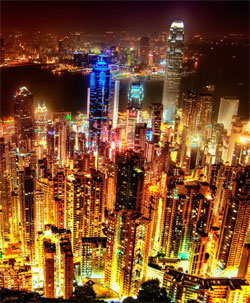 Gandhi argued that the type of industrialized development adopted by Britain was based on a mind-set that encourages humans to regard man as conqueror and owner of the Earth. And it encourages ordinary people to engage in an endless consumerism again underpinned by arrogance: if one has sufficient cash, there is a sense of entitlement to possess anything that can be bought, regardless of the impact on the environment or on people in far-off places.

Oil comes from some place, minerals are mined from somewhere and the corporations that profit from extracting such resources impose a massive cost on people and the environment, not least by fuelling resource-driven conflicts – think Libya, Congo, Iraq, Syria (all underpinned by resource grabs, despite the “humanitarian” or “war on terror” narrative).

Although there was a role for industrialization that was not resource- or energy-intensive and which involved for example shipbuilding, iron works and machine making, for Gandhi this would exist alongside village handicrafts.

This type of industrialization would not make villages and village crafts subservient to it: nothing would be produced by the cities that could be equally well produced by the villages and the function of cities would be to serve as clearing houses for village products. He argued that with new technology even energy could be produced in villages by using sunlight and local materials. And, of course, people would live within the limits imposed by the environment and work in harmony with the natural ecology rather than by forcing it to bend to the will of profiteering industries.

Consider that prior to the British, India was among the richest countries in the world and had controlled a third of global wealth until the 17th century. It was an exporter of spices, food grains, handicrafts, handloom products, wootz steel, musk, camphor, sandalwood and ivory items, among other things. The village was the center of a rural economy, which was the center of entrepreneurship. The British dismantled much of this system by introducing mono crop activities and mill-made products, and post-independence India failed to repair the economic fabric. 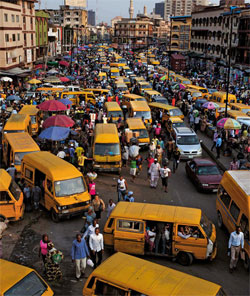 Officials now seem to be preoccupied with a fetish for GDP growth and an unsustainable model of ‘development’. Part of this process involves destroying the environment and moving hundreds of millions from the land and into what are already overburdened mega-cities. Depriving people of their livelihoods in rural India (and deliberately running down agriculture) means mass migration to cities that are failing to produce anywhere near the volume of jobs required to soak up new arrivals.

If a forest can be chopped down and the land and timber sold, this increases GDP and thus constitutes “growth”. The wildlife has gone and the forest which had been managed for centuries by local people who had used its resources sustainably for their needs has disappeared.

How much damage is being done by a system that thrives on turning people into slaves to their desires and allowing (U.S.) imperialism to reign free?

Gandhi offered a vision for a world without meaningless consumption which depleted its finite resources and destroyed habitats and the environment. Given the problems facing humanity, his ideas should serve as an inspiration to us all, whether we live in India or elsewhere.

Unfortunately, his message seems to have been lost on many of today’s leaders who have capitulated to an out-of-control “capitalism” that is driving the world towards resource-driven conflicts with the ultimate specter of nuclear war hanging over humanity’s head.