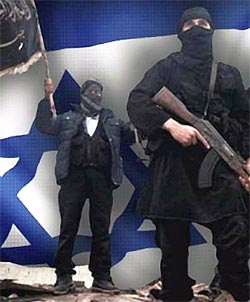 Photos released on social media showed that the Israeli Defense Forces (IDF) medical personnel have been recovering wounded terrorists from the Syrian side of the Golan Heights and then treated them in medical centers on the Israeli-occupied side of the region.

According to sources, the militants have been treated by the IDF Israel’s medical centers only to then be sent back into Syria were they continue to commit terrorist acts.

Despite the fact that such gunmen are labeled as “rebels” by Western and Persian Gulf media due to their apparently “moderate” stance against the Syrian government, the actual reality stands that a vast majority of the Golan-based militants which Israel provides medical and military aid to are committed militants who pursue sectarian ideals in Syria.

Israel is known to have assisted Golan-based militants of the Al-Qaeda-linked Al-Nusra Front (Tahrir al-Sham Hay’at or the Levant Liberation Board) with medical aid and military equipment since as early as 2013.

In late-June of this year, Israel provided air support for terrorists’ offensive against pro-government forces at the city of Madinat al-Baath.

Local sources disclosed in late June that several terrorists, who had been wounded in the battle with the Syrian government forces in Quneitra province, were taken to an Israeli hospital.

The sources reported that a number of injured members of Al-Nusra Front were transferred to the Israeli hospitals via al-Hamidiyeh region in Quneitra countryside.

The army troops repelled Al-Nusra Front’s offensives in the Southwestern province of Quneitra, leaving tens of terrorists dead and many more wounded. Later, the Israeli aircraft attacked the Syrian government forces’ tanks and artillery positions South-West of the war-hit country.

That was not the first time that Al-Nusra terrorists were transferred to Israeli hospital after sustaining injuries in clashes with the army soldiers.

Can’t Sleep? Try Sleeping On The Floor (And Other Sleep Hacks)