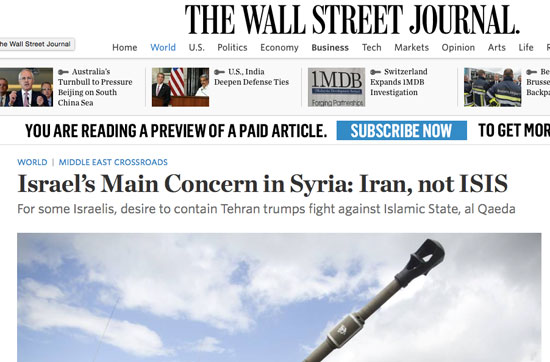 Gordon Duff from Veterans Today wrote in 2013 that the Israeli regime was caught red-handed, orchestrating a world war through covert operations and deceptive means. “Israel is putting into motion their ‘final solution’,” said Duff then, “a campaign to pit nation against nation. The result, the planet a smoldering ruin, Israel ruling over the ashes and mass graves, is a foregone conclusion, at least to Netanyahu and his worldwide terrorist network.”

Duff brought a number of evidence to back his claims and added that the Israelis intended to pit nations against each other, which means that they would end up killing two birds with one stone. Did they actually plan this? Duff wrote: “Yes, they actually do, the Zionists, the Neocons, and the Dominionists, a vast worldwide network of financial criminals, corrupt politicians and power-mad tyrants. In America, those now seeking to stage a military coup in the United States, submit to full Israeli control and lead the world into a new ‘dark age’.”

Duff wrote those words on April 29, 2013. By May of the same year, Jewish Neocons Daniel Pipes stunned us all by proving that Duff was right all along. In an article entitled Support the Syrian Rebels? Pipes posited a bold claim on the Syrian government and the Syrian rebels/terrorists/jihadists, two entities that have been in mortal combat since the beginning of the war.

Pipes declared that “the West should prevent either side in the civil war from emerging victorious by helping whichever side is losing, so as to prolong their conflict.”
Did you catch any of that? The world should support both the Assad government and the terrorist cells so that they could end up killing each other. What if it costs millions of lives? What if thousands upon thousands of mothers end up losing their precious sons and daughters and their husbands?

Well, too bad. What if it costs millions dollars? It’s a small price to pay, Pipes seems to think. What seems to matter to Pipes is that both entities have to go, no matter what the cost.

Now this is not coming from a man who doesn’t understand international law, logic and reason. Pipes is a Harvard graduate, with a Ph.D. in medieval Islamic history. His father was Harvard historian Richard Pipes.

Pipes certainly knows what he is doing. With respect to his essentially diabolical plan for Syria we have just looked at, he said: “This policy recommendation of ‘helping whichever side is losing’ sounds odd, I admit, but it is strategic.”

Pipes could not get around his conscience which kept telling him that the plan was “odd” but he ended up suppressing practical reason and replacing it with, well, essentially Talmudic mores.

Keep in mind that the Neoconservative movement, as Jewish writer Sidney Blumenthal has shown, found its political and intellectual ideology “in the disputatious heritage of the Talmud”.

In other words, people like Pipes and their minions are articulating “the disputatious heritage of the Talmud” in the political landscape. The Talmud metaphysically and categorically rejects the moral and political order and makes it very clear that the so-called Goyim must be subservient to the Khazarian Mafia.

In that sense, if the Goyim do not want to obey the commands of their oppressors, then the Goyim must be really bad people. After all, the Goyim have been called donkeys by the late rabbi Ovadia Yosef. “Goyim (gentiles, non-Jews) were born only to serve us”, he said. “Without that, they have no place in the world – only to serve the People of Israel.”

Yosef was never challenged by Western politicians because those politicians obviously did not want to ruin their political careers. Goyim like John McCain and Lindsey Graham probably agreed with the rabbi, and both McCain’s and Graham’s political careers have already indicated that they have been thoroughly subservient to their oppressors.

In any event, the Israeli regime and their minions have always intended to pit people of good will against each other, particularly when those people are not acting in ways that help the regime’s ideology itself. To create conflict where there is none is one of their plans and deceptions. Their agents have been able to do exactly that in the United States in the 1920s, most specifically in places like Boston, Philadelphia, Detroit, and Chicago. If they have to ally with radical groups and terrorist cells to get their work done, as in the case of the Syrian war, so be it. 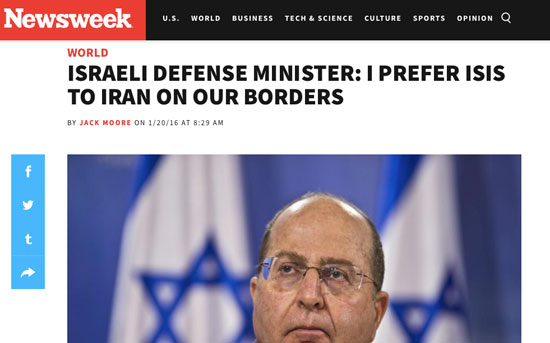 This was one reason why the Ayatollah Khomeini called the United States the “Great Satan”. US officials, said Khomeini, allowed the Israeli regime to use them as pawns and created conflicts in the Middle East. He said: “There is no crime America will not commit in order to maintain its political, economic, cultural, and military domination of those parts of the world where it predominates. It exploits the oppressed people of the world by means of the large-scale propaganda campaigns that are coordinated for it by international Zionism.
By means of its hidden and treacherous agents, it sucks the blood of the defenseless people as if it alone, together with its satellites, had the right to live in this world.”

E. Michael Jones comments: “Khomeini was here referring to Iraq, which had already launched a full-scale attack on Iran, as the proxy of America and Israel. Khomeini was hoping for Islamic unity, but he found neither sympathy nor allies in the Islamic world.
Pakistan, which was a Saudi asset, had already been seduced by Saudi and American money and recruited into the final campaign of the anti-Communist crusade, when their ISI stepped forward as the exclusive arms brokers for the mujahedeen in Afghanistan.”

In short, there is no great risk for the Israeli regime. And if any nation attempts to use the moral and political law to reign them in, they will pull the anti-Semitism card out of their pockets. As the late Israeli politician and Minister of Education Shulamit Aloni said in 2002, anti-Semitism is “a trick; we always use it. When, from Europe, if someone is criticizing Israel, we bring up the Holocaust. When, in this country (USA), people are criticizing Israel then ‘they are anti-Semitic’. And the organization is strong and has a lot of money and the ties between Israel and the American Jewish establishment are very strong and they are strong in this country. They have power, money, media and other things and their attitude is ‘Israel my country’, no matter if it’s right or wrong… They are not ready to hear criticism. It is very easy to blame people who criticize certain acts of the Israeli government as anti-Semitic and to bring up the Holocaust and the suffering of the Jewish people and that ‘justifies’ everything we do to the Palestinians.”

You want to produce evidence showing that the war in Iraq was largely a creation of the Neoconservative movement, which has created a fifth column in the United States? Well, you are anti-Semitic. You want to criticize Israel for continuing to obliterate civilians and grab their land in the Middle East? You are anti-Semitic. You want to write scholarly studies showing that the Israel lobby has been a disaster for the United States? You are anti-Semitic. As Israel’s justice Minister Ayelet Shaked has put it in 2016: “In the past, we saw European leaders speaking against the Jews. Now, we see them speaking against Israel. It is the same anti-Semitism of blood libels, spreading lies, distorting reality and brainwashing people into hating Israel and the Jews”.

Keep in mind that it was the same Shaked who unequivocally declared that the enemy of Israel is not terrorism or a few Palestinians but “the Palestinian people” in totality. For example, suppose a woman happens to give birth to a child. If that child turns out to be a terrorist, Shaked would say that the mother is guilty of terrorism as well. “Behind every terrorist stand dozens of men and women, without whom he could not engage in terrorism”, she said. “They are all enemy combatants, and their blood shall be on all their heads. Now this also includes the mothers of the martyrs, who send them to hell with flowers and kisses.”

If a person resists this essentially incoherent thesis, then he or she is anti-Semitic. Shaked is obviously living outside the moral and political order. She could not realize that she was making a case for real anti-Semitism. Think about it for a moment.

If people like Bernie Madoff and companies like Goldman Sachs end up destroying the US economy, if a number of Jewish revolutionaries end up producing pornography as a way of defiling or destroying the culture, does Shaked mean to tell us that we should treat the families of those people as enemies as well?

More importantly, isn’t Shaked implicitly arguing that she herself is an enemy of reason and much of the West?
Shaked is obviously using anti-Semitism to marshal her essentially Talmudic ideology. This is one reason why much of the West has stayed silent concerning Israel’s perpetual crimes. No one wants to be called an anti-Semite, which brings us to our essential point here.

The Israeli regime has bombed the Mezzeh military airport near Damascus and not a serious Western politician has said that Israel has violated international law and therefore must be sanctioned. In fact, the Zionist media and the Neocons have yet to let the Americans know of this important event.

The Times of Israel has reported on the bombing of the Mezzeh military airport, but they put a spin on the issue: “Important military airport, installations near Damascus reportedly bombed; several Hezbollah fighters killed.” In other words, Israel was just fighting terrorist cells like Hezbollah!

The Syrian government, with the help of Russia, has reached a sensible deal with the terrorists in the region. Obviously the Israeli regime didn’t like that. They had to act because any peaceful resolution would mean that Assad would have to stay in power.

Israel does not want Assad in power therefore they had to provoke the government to do something stupid. George W. Bush wanted to do something similar when he was told that there were zero weapons of mass destruction in Iraq.

What we are seeing again and again is that Israel does not want peace at all. Peace is like terrorism for them, and terrorism is like peace. They want to bring the world down because their ideology cannot take place until the Goyim have completely subjugated. In fact, they brag about having nuclear warheads and being able to wipe much of the West off the map. As Israeli military historian Martin van Creveld put it in 2003: “We possess several hundred atomic warheads and rockets and can launch them at targets in all directions, perhaps even at Rome. Most European capitals are targets for our air force… We have the capability to take the world down with us. And I can assure you that that will happen before Israel goes under.”

But the Israeli regime and their puppets are not in charge of history. If Hegel and Solzhenitsyn are right, truth will eventually triumph. Our job is to submit our will to the truth and follow that truth wherever it leads. This means that there is no need to fear the current regime. They cannot rule forever.