Israel planned to set the world on fire in 1967 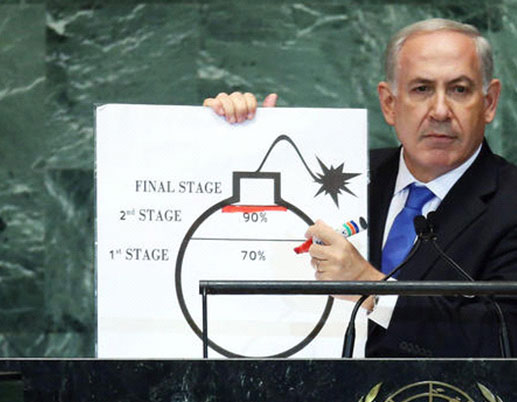 “Yes, Israel’s nuclear bomb has already reached that limit. In fact, we have the bomb. So, don’t mess with us.”

During the Six-Day War in 1967, long before virtually any Muslim country like Pakistan could acquire nuclear weapons, Israel was already planning to detonate a nuclear weapon on top of a mountain on the Sinai Peninsula if they realized that they would lose the Arab-Israeli war.

This was called “doomsday operation,” which essentially was put in place to intimidate Arab countries like Jordan, Egypt, Iraq and Syria. The atomic device was never detonated because Israel won the war by a landslide. Itzhak Yaakov, the retired brigadier general at the time, said:
“Look, it was so natural. You’ve got an enemy, and he says he’s going to throw you to the sea. You believe him. How can you stop him? You scare him. If you’ve got something you can scare him with, you scare him.”

Israel was completely silent about its nuclear weapons for years precisely because they wanted a nuclear-free Middle East—with Israel as the exception. Even in 2001, Mr. Yaakov was arrested, at age 75, on charges that he had imperiled the country’s security by talking about the nuclear program to an Israeli reporter, Ronen Bergman, whose work was censored.

When U.S. officials finally learned about Israel’s nuclear weapons—more than one hundred of them—they were completely shocked because they had underestimated Israel. The officials admitted when they first saw some of those warheads, “Our thought was ‘Wow!’ How could we have been so wrong? We always said, ‘So the Israelis gotten warheads? Okay. So what? Anybody can build those.’ All of a sudden we learned they’d become sophisticated. It blew everybody’s mind.”

Others in the Reagan administration were “paranoid.” One official declared, “It was kept away from the people at Z Division [a special group that provides the United States Intelligence Community with information about foreign nuclear programs].”

Israel’s plan to detonate a nuclear bomb was also called the “Samson option.” Samson, as we recalled, died with his enemies in an act of suicide. And Israeli officials thought it was wise to bring this biblical character to life once more because they thought that Israel was facing enemies. And how did they justify the torture and brutalization that happened just seven months before the Six-Day War?

Well, Israel was trying to stop another Holocaust, the argument goes. Bret Stephens of the New York Times risibly declares,
“In June 1967, Arab leaders declared their intention to annihilate the Jewish state and the Jews decided they wouldn’t sit still for it. For the crime of self-preservation, Israel remains a nation unforgiven.”

But that again is a categorical lie. As General Matituahu Peled, chief of logistical command during the war and one of 12 members of Israel’s General Staff, put it way back in 1972:
“The thesis according to which the danger of genocide hung over us in June 1967, and according to which Israel was fighting for her very physical survival, was nothing but a bluff which was born and bred after the war.”

In a similar vein, Mordechai Bentov, a member of the wartime government and one of 37 people to sign Israel’s Declaration of Independence, said:
“This whole story about the threat of extermination was totally contrived, and then elaborated upon, a posteriori, to justify the annexation of new Arab territories.”

Prime Minister Menachem Begin said: “In June 1967 we had a choice. The Egyptian army concentrations in the Sinai approaches did not prove that Nasser was really about to attack us. We must be honest with ourselves. We decided to attack him.”

So, Bret Stephens and other Zionist puppets were trying to justify Israel’s torture and brutalization, despite the fact that Israel constantly bragged about how they can annihilate much of the world in a matter of minutes. As Israeli military historian Martin van Creveld put it more than a decade ago:
“We possess several hundred atomic warheads and rockets and can launch them at targets in all directions, perhaps even at Rome. Most European capitals are targets for our air force…. We have the capability to take the world down with us. And I can assure you that that will happen before Israel goes under.”

The Death Of The Ego