Massive rallies and Facebook campaigns calling for Palestinian genocide are ignored by Western mainstream media and Facebook despite concerns and collaborations aimed at stopping “calls to violence”. 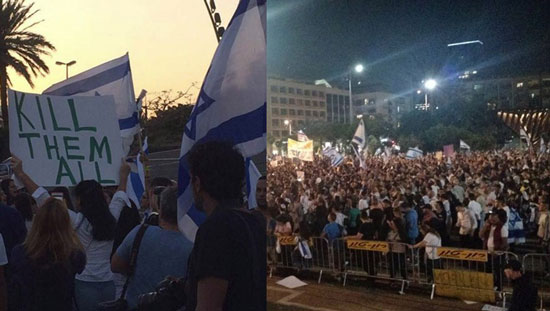 Since last October, the Israeli government has accused Palestinians and their allies of “inciting violence” against Israelis, despite the fact that only 34 Israelis have died in that time frame compared to 230 Palestinians. The uptick in violence has been attributed to an internationally condemned Israeli encroachment of Palestinian lands in the contested West Bank. Israeli government concern over recent violence has led them to arrest Palestinians for social media content that could potentially lead to crimes. So far, 145 Palestinians have been arrested this year for “pre-crime” via social media “incitement.” This practice eventually led to a collaboration between Facebook and the Israeli government, whose joint effort to curb social media “incitement” has led to the banning of several Facebook accounts of Palestinian journalists and news agencies.

However, social media, as well as mainstream Western media, have failed to condemn Israeli “incitement” against Palestinians, a practice that is surprisingly common considering the little to no attention it receives. Often these anti-Palestinian posts, pictures, and rallies are rife with calls for genocide, with cries of “Death to the whole Arab nation” and “Kill them all” surprisingly common.

Even the Times of Israel ran an op-ed article about “When Genocide is Permissible” in reference to Israel’s treatment of Palestinians. Though the post was eventually taken down, it points to an all-too-common and dangerous mentality that social media, the Israeli government, and Western media “conveniently” ignore. An Israeli news agency even put the then-suspected preferential treatment to the test and found that Facebook and the Israeli authorities treated calls for revenge from Palestinians and Israelis very differently. 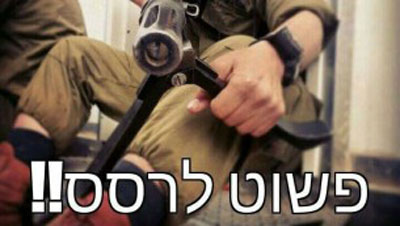 An image uploaded to Facebook shows an Israeli pointing a gun. The text reads “Mow them Down”
Credit – The People of Israel Demand Vengeance Facebook Page

Even massive rallies calling for Palestinian genocide have been ignored entirely by social media and the corporate press. Earlier this year in April, a massive anti-Palestinian rally took place in Tel Aviv where thousands called for the death of all Arabs. The rally was organized to support an Israeli soldier who killed an already-wounded Palestinian by shooting him execution-style in the head. The soldier, Elor Azaria, was charged with manslaughter for the killing, which occurred deep within Palestinian sovereign territory in the city of Hebron. Hebron contains an illegal Jewish settlement, but despite its illegality is protected by Israeli Defense Forces (IDF) all the same. This has led to frequent clashes between Israelis and Palestinians in the area. 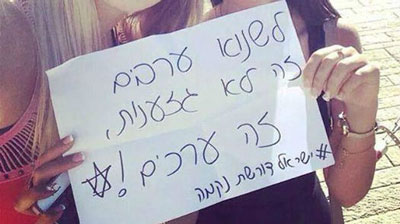 The Tel-Aviv rally was attended by an estimated 2,000 people and several Israeli pop icons entertained attendees including singer Maor Edri, Moshik Afia, and Amos Elgali, along with rapper Subliminal. Chants of “Elor [the soldier] is a hero” and calls to release the soldier were common. One woman was photographed holding a sign reading “Kill them all.” A Jewish reporter at the scene remarked that it seemed “more like a celebration of murder than anything.” Despite the obvious animosity and incitement made evident at the rally, it isn’t difficult to imagine what the response would have been if this has been a pro-Palestinian rally calling for the deaths of Jews. The stark divide between what is permissible for Palestinians and what is permissible for Israelis should concern us all as the widespread bias of social media, the press, and many governments threaten to blind us from the realities of the Israeli-Palestinian conflict.

Trump’s Victory: EU Establishment Was Caught with Pants Down