Italy To Blacklist Freemasons for Infiltrating Highest Levels of Government 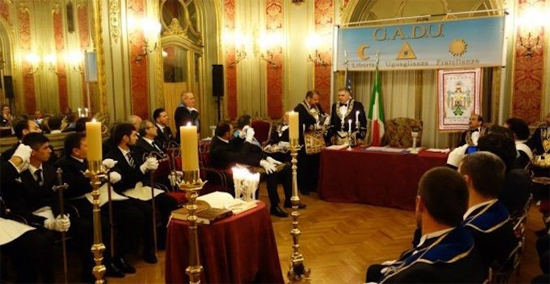 Italy drafted legislation to blacklist the Freemasons after a police investigation revealed that top politicians were ordered by the secret society to influence government policy.
Under the new laws, politicians will be forced to publicly declare if they are a freemason. Failure to do so could result in a prison sentence.

Thetimes.co.uk reports: “The legislation is being proposed after police raids on the four largest freemasonry orders in Italy discovered 193 mob-linked masons on the orders’ secret membership lists in Sicily and Calabria, southern Italy.

The findings were published last month (Feb. 2018) by the Italian parliament’s anti-mafia commission, which alleged that mobsters used secret lodge meetings to do business with politicians and entrepreneurs. Laws proposed by the commission would ban magistrates from joining the masons and compel public officials to say if they are members.”

Rosy Bindi, the commission president, said she also hoped to compel masons to compile proper membership lists. “About 25 percent of the names that were found on their lists were just initials or in code” she said. “There was no transparency and we believe societies should keep proper records.”

The threat to end masonic secrecy provoked a storm of protest from members who claim that the law is inspired by the ban on the orders put in place by the fascist dictator Benito Mussolini in 1925.
“These new proposals are a throwback to the fascist ban and are a wider threat to democracy as a whole” said Stefano Bisi, grand master of the Grande Oriente d’Italia, Italy’s largest order, which has 23,000 members.

Mr. Bisi, 60, a former journalist, oversees the order from its headquarters in an elegant, 17th-century villa surrounded by palm-lined gardens near the Janiculum hill in Rome. Pride of place at the villa is a portrait of Giuseppe Garibaldi, who fought to unify Italy and was a head of the order. “If any mafiosi have infiltrated our order we have a good record in kicking them out” Mr Bisi said. “One hundred and ninety three cases among 17,000 members and applicants in Sicily and Calabria is about 1 percent,” he added.

Mr. Bisi said Italian masons were right to keep their membership secret due to prejudice against them in Italy dating back to fascism, but also linked to hostility from the Roman Catholic Church. “They excommunicated us in 1738, yet we never burned anyone”, he said. He claimed that the reputation of Italian masonry suffered in the 1970s with the discovery of the ultra-rightwing P2 lodge, which was implicated in corruption, linked to the suspected murder of the banker Roberto Calvi in London and included secret service chiefs and a young Silvio Berlusconi on its books. Italian masons were, however, more involved in charity work today, he said. “Every citizen has the right to state publicly or not whether he attends a church, a mosque, a lodge or even the boy scouts” Mr. Bisi said. “Why should there be an obligation to declare it?”

Well, there is plenty of evidence that the freemasons are ruling governments from the shadows and doing despicable harm to the unaware population. This would be a good reason why it should be an obligation for every politician to declare whose sinister orders they are following…