Kissinger: ‘Terrorists Are People that Reject the International System’ 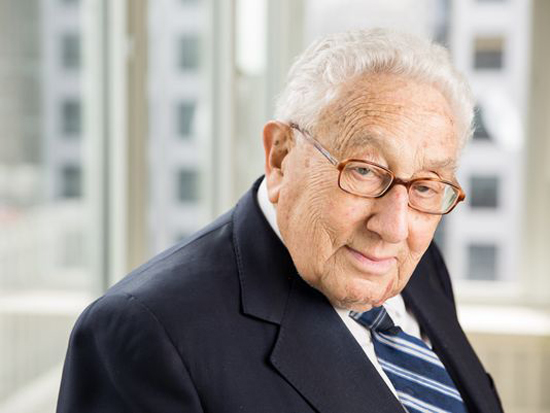 Kissinger’s definition of terrorism might surprise you. Then again, it might be exactly what you thought it would be. The clip below is from a 2007 AKBank convention in Istanbul, Turkey held right before the annual Bilderberg Meeting which took place there that same year.
In it, former National Security Advisor and Secretary of State, as well as member of the:
– Bilderberg Group;
– Council on Foreign Relations;
– Trilateral Commission;
– Bohemian Grove
…among others, Henry Kissinger, can be seen giving the following speech:

“In the Middle East, we live in a different world.
The nations do not represent historic entities in the same sense that European nations did. Turkey of course does, and Iran in a considerable extent does.
But in the region in between, the borders were drawn by the victors of World War I on the basis largely of what would facilitate their influence.
So therefore, the identities of these countries, and of their borders, can be challenged more easily.

What we in America call terrorists are really groups of people that reject the international system, and they’re trying to regroup it to a radical Islamic fundamentalists’ kind.”

Clearly Kissinger is saying that, because many Middle Eastern countries do not have what appears to be in his view the “historical significance” of older countries, they are wide open for attack, regime change and re-ordering.

Only a few years later, we have witnessed the Western-backed Arab Spring, which has turned over numerous North African and Middle Eastern nations.

After nearly two years of semi-covertly arming al Qaeda fighters in Syria, most recently Western support and provision of arms for Syrian Rebels (who admittedly used their own chemical weapons) are becoming public knowledge now that a mythical “red line” has supposedly been crossed by Syrian leader Bashar al-Assad.
Remember how America “freed” Egypt and Libya? Well, Syria is “wash, rinse, repeat”.

On top of that, Kissinger is also saying the word “terrorist” really refers to someone who would reject the “international system” – a New World Order. Part of that order appears to be the American empire building and the spreading of our nation’s brand of “democracy” throughout the rest of the world… whether they like it or not.

How do you think someone with Kissinger’s perspective would see American patriots who reject the United Nations or central banking system?
Surely, he sees them as “terrorists” as well.

Further, if the State held similar views and used the “terrorist” label – which is used in US like screaming “Fire!” in a theater to circumvent the Constitution on a daily basis – such resistors to the new world order would be instantly criminalized, marginalized and marked for imprisonment or death.