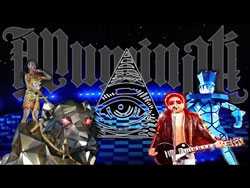 The Illuminati now lie at the heart of pop culture. In fact, every single year at major events like the Olympics, or in this case, the Super Bowl, it has become not only commonplace, but even expected, to see a display mocking the weird rituals and desire for world dominance that the Illuminati have become known for.

This topic was further popularized in the mainstream when WikiLeaks revealed John Podesta’s (Hillary Clinton’s campaign manager) ‘spirit cooking’ emails.
What you might not be aware of the fact that this is hardly a new trend. Although hints of their presence have become much more pronounced now compared to previous decades, they have been present in Hollywood since its inception. For example, in this 1980s episode of Disney’s Ducktales, you can clearly see an optometrist’s chart that reads, “ASK ABOUT ILLUMINATI” in the background.

Here is another episode, showing what appears to be an extradimensional demon or entity being conjured up by a Hollywood executive. It seems safe to say that showing black magic in a children’s cartoon is an unusual choice.

If we examine the works of multiple scholars, from Plato to Manly P. Hall and further down the line, we see that the use of rituals and techniques to invoke and control “spirits” or lifeforms that could be existing within other dimensions or worlds are commonplace among certain groups of people, and these are practices most people associate with the modern day Illuminati.

For example, according to Hall, “a magician, enveloped in sanctified vestments and carrying a wand inscribed with hieroglyphic figures, could by the power vested in certain words and symbols control the invisible inhabitants of the elements and of the astral world. While the elaborate ceremonial magic of antiquity was not necessarily evil, there arose from its perversion several false schools of sorcery, or black magic.” He also writes:

“By means of the secret processes of ceremonial magic it is possible to contact these invisible creatures and gain their help in some human undertaking. Good spirits willingly lend their assistance to any worthy enterprise, but evil spirits serve only those who live to pervert and destroy…. The most dangerous form of black magic is the scientific perversion of occult power for the gratification of personal desire”.

Does Talking About It Make It Worse? 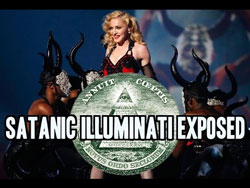 Many believe that talking about what these secret societies do is negative and that, by discussing it, we help perpetuate their behavior and also empower them. This couldn’t be further from the truth. Fear, denial, and ignorance are what feed this type of behavior, not awareness. Coming to a place of peace about it, making others aware, and taking action is how we empower ourselves to change it.

We must stop denying the truth and fearing the reality that not only are our governments not doing things in our best interest, but they are not even entirely in power to begin with. Only when we become aware of where we are truly at, can we work to change it.

Here is an article about a Donald Duck cartoon from 1959 that teaches children sacred geometry.

This is far from a conspiracy theory. A few years ago, the idea that there was an international cabal spying on everyone and at the same time collecting massive amounts of data on them was still just a crazy conspiracy, but Edward Snowden changed all that.

So, What Exactly Is Going on Here?

Secret societies like the Illuminati operate on the knowledge that collectively, human beings have massive amounts of creative power, and that our thoughts, feelings, and emotions play a large part in manifesting our physical reality and the human experience. Through this knowing, the Illuminati, financial elite, or whatever you prefer to call them, use certain rules to manipulate that collective power. According to author and researcher David Wilcock in his book The Source Field Investigations: The Hidden Science and Lost Civilizations Behind the 2012 Prophecies:
“These people practice black magic, and they are very very good at it…. The rules are that they use two components, imagination and will. They seed our imagination with a particularly desired thought form, and then, they create events that fire our will into that thought form to actualize it… They seed the imagination, let’s say, with the idea that guns kill people, guns are bad, therefore we take away all the guns, and nobody’s ever gonna die again, everything’s gonna be great. Then, in order to actualize our will, they’ve seeded that thought form – gun control, gun control, gun control – but they are not gonna lose their guns, and how do we know that we can trust them… ?”

Continuing with the gun control example, the next step would be to create a fake shooting to further legitimize the taking away of the guns. This type of tactic can also be seen through the use of false flag terrorism, with 9/11 being the perfect example. Multiple terrorist attacks have been created, funded, and perpetuated by the West in order to justify the infiltration of the Middle East for ulterior motives, and because we accept the lies, we allow it to happen. Their power lies in their ability to manipulate our consciousness, and therefore is derived entirely from us. This is why it’s so important to wake up. 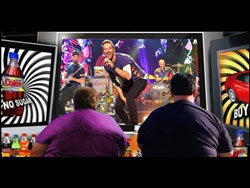 They are not impeding on our free will, but rather enacting their desires through us by manipulating public opinion. We choose to follow, and we participate the in events, industries, and more that allow them to carry out their plans.
So long as we agree, or a large portion of us agree, to measures of manipulation disguised as measures of goodwill, these secret societies, comprised of the 1 percent will continue to have their way. But we can change it anytime by simply choosing to disagree.

That being said, it’s not easy for us to see what their intentions are and to separate the truth from the lies. Some of the most sinister plans are disguised as being beneficial to us, like the ‘war on terror’ where soldiers are pumped with patriotism thinking they are fighting for freedom, not elitist interests.

Another tradition of secret societies is to hide things in plain sight, so they are so obvious that we ignore them. This is why we see esoteric symbolism, like the all-seeing eye and pyramid, used everywhere in our world.

Here is the commercial from the 2016 Super Bowl.

Entertainment is literally a mass brainwashing tool, and can be used to shape the perception of those who pay attention to it. This particular commercial is clearly mocking the idea that there are powerful secret societies who perform weird rituals. They are basically debunking the idea that the Illuminati could be real.
It’s designed to make people laugh at the idea that this could actually be real. If they want the masses to ridicule a topic, all they have to do is put out a clip of it being ridiculed, and they’ve won.

Don’t be fooled, think for yourself, and know that our world ‘leaders’ and the financial elite have been tied to this type of activity for decades. A wise man once said that “condemnation without investigation” is the height of ignorance, so before you simply brush off this ‘secret society stuff’ it might be better to at least do some research on it before developing an opinion that was given to you by your television set.