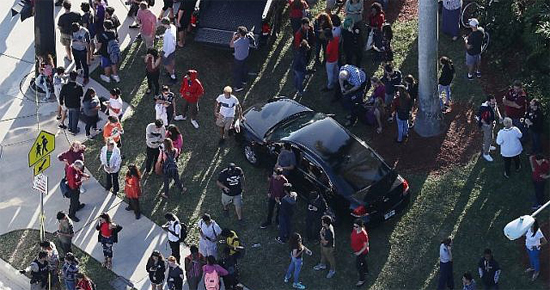 While the outrage and horror being expressed about the mass school shooting that took place on Valentine’s Day in Parkland, Florida is certainly warranted, the anger is incredibly displaced. Anger, disappointment, fear and sadness are all acceptable and understandable emotions to experience after an event such as this takes place in the United States or elsewhere. But it is the elsewhere that we shall focus on right now.

Thus far in 2018, there have been 18 school shootings in the US. Only in the first two months of the year, already numerous children have lost their lives due to gun violence while in school, where their parents send them with the expectation that they will learn, grow, and be safe.
In 2018, there have been 30 known mass shootings in the US. A mass shooting is defined as a shooting in which four or more people were shot during a single event, not including the shooter.

Why is this a phenomenon that people see and have become sickeningly used to in the United States? Americans’ mental health statistics are comparable to many other nations. And they are certainly not the only nation on the planet in which everyday citizens have access to firearms. So why are they the only country mourning the loss of young lives who were murdered in cold blood while at school 18 times just this year, before even the end of February?

US citizens’ efforts to grasp at ideas and policies to curb control won’t solve the problem of school shootings. Universal healthcare won’t solve it. Nor will open borders or a living wage or abolishing the National Rifle Association. So what will?

The answers to these questions are simple but multifaceted. The answer is obvious if you’re able to step back and look at the big picture of the American nation and the culture it has cultivated. But most of us don’t. Most of us react to each individual issue or event as if there is no correlation between them and anything else. We look at the issues on the surface and we grasp for a bandage for temporary relief.

School shootings are a symptom of a very large, very dangerous problem. They are not simply a symptom of a need for gun control, or a symptom of a lack of accessible mental health services, or a symptom of an over-medicated, desensitized youth population.
Americans’ problem, a problem that has bled into every level of their society, is simple. The US is a nation that does not value life.

The US was built on the genocide of its native inhabitants and not long after that, Americans bought and sold humans as if they were commodities. They have occupied nations and murdered their inhabitants for years. They have been at war with the idea of terror for SIXTEEN YEARS. And they wholeheartedly support a nation actively engaged in apartheid.

The United States is DIRECTLY responsible for the deaths of over 4 million Muslims. Four million. Pause for a moment and let that number sit in your mind. Picture it and then try to picture 4 million people. Do you even know what 4 million people looks like? That’s the population of Los Angeles.

The children who are dying at the hands of their classmates have lived in a world in which their nation has been at war for their entire lives. They see it on the news, they see television shows and movies that glorify the war on terror, and they play video games set in actual war zones. Most of the Americans cannot even begin to imagine how this might influence development or perception of the world, reality, and understanding of the role they play in the greater collective of humanity. They have grown up with a constant enemy, a constant vibration of unrest and violence in their universe.

So Americans find themselves angry and saddened when these lives are lost. And they are understandably eager to solve the problem so they bark out their idea of solutions on social media, they cry, and they find themselves glued to the news for the latest culprit of what went wrong that allowed this young person to purchase a weapon and to have such hate in their heart.

But the problem is actually them, the Americans. The problem is their culture. As long as they praise a former president who carried out hundreds of drone strikes, as long as they idly sit by while they provide the means for deadly famine in Yemen, as long as they refuse to aid victims of natural disasters, continue to spend $8.3 million per hour on war and perpetuate a culture of sexual exploitation of minors, school shootings, mass shootings, and other untold violence will continue on their soil.

It’s high time the Americans remove the bandages and repair the underlying disease and decay that is embedded in the flesh of their nation. They must fully grasp their place in the universal collective of the human race and act with love, compassion and caring toward their physical neighbors as well as their brothers and sisters across the globe. We are one. And until the US people act like it, their nation will continue to crumble, and reports of school shootings and violence will continue to flash across television screens across the country and on smart phones in the hands of Americans.