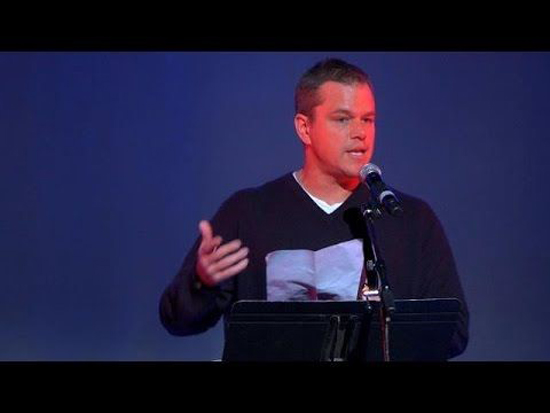 We all know and understand that the situation of the world is somewhat lop-sided, however, oftentimes, celebrities seem jaded. This speech from Matt Damon will shock everyone who views it, because he isn’t quite as lost as we would have imagined, and his words are powerfully true.

Damon makes some crucial points in this passionate rant against the system, and what he calls a “topsy-turvy” world.
“I start from the supposition that the world is topsy-turvy. That things are all wrong,” begins actor and writer Matt Damon in this powerful speech calling on people to question authority.
“The wrong people are in jail, and the wrong people are out of jail,” Damon goes on.
“The wrong people are in power, and the wrong people are out of power. Wealth is distributed in such a way as to not just simply require small reform, but a drastic re-allocation. All we have to do is to look at the state of the world today, and you can see things are upside down. You might watch TV and think it’s fine, but you just have to detach and come back, look at the world, and you’re horrified.”

“Our problem is the numbers of people all over the world who have obeyed the dictates of their governments and have gone to war. And millions have been killed because of this obedience. We recognize this from Nazi Germany,” Damon says, referring to blindly obedient citizens as “herd-like people”.
“We know that the problem there was obedience. That the people obeyed Hitler. People obeyed. That was wrong. People should have challenged it, they should have resisted. And if we were only there, we would have shown them.”

Could it be? Could it actually be someone who is in the actual limelight speaking out against blind obedience among the masses? It appears so, and this speech shines truth.

“The rule of law maximizes injustice. The rule of law is the darling of the leaders and the plague of the people. We ought to begin to recognize this. What we are trying to do is to get back to the principles, the aims and the spirit of the Declaration of Independence. This spirit is resistance to illegitimate authority.”

Observing laws that do not serve the greater good is participating in injustice, and thankfully, Matt agrees with this fact in a speech that leaves us breathless. Advocating for helping our common man, rather than hurting him, and he doesn’t stop there.

Sometimes, the fight against the evils of the world may seem like a lost cause, but in the midst of all this distraction, of all the celebrities feeding the never-ending brainwashed majority, if one person in the limelight can stand up and say exactly what we are thinking, then maybe all isn’t lost. Maybe we do have a fighting chance of recovering this world, and actually creating something beautiful together.