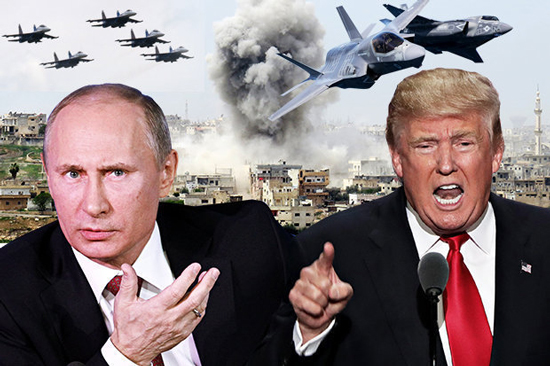 Russian President Vladimir Putin laid down the law at the G20 meeting in Hamburg which took place on 7-8 July 2017, stressing that the future of Syria and its president lies in the hands of the Syrian people, not the U.S. military or State Department.

Syria is a sovereign state, ruled by a duly elected president, who was voted in during democratic elections that were declared free and fair by the United Nations. Putin believes that warmongering Western powers have no right to decide who rules the Syrian people.

Responding to a question about Trump’s presidency versus Obama’s presidency, Putin said that the U.S. stance towards Syria has not drastically changed, although it has become more pragmatic, adding that the U.S. has also played a certain role in the recent decline of violence in the country.

He then spoke about a positive understanding on the issue of reaching a ceasefire agreement in the southwest of Syria and invited his Jordanian and Israeli partners to cooperate, pointing out that “Syrian territorial integrity” has to be preserved “at all costs”.

Speaking of his meeting with his U.S. counterpart Donald Trump, Putin said that real life Trump is a rather different person than the one we know from TV, as he is far more rational. Putin added that the outcome of the talks was very positive and will likely provide the ground for normalization of relations between the countries.

In regards to the issue of the alleged Russian interference in the last U.S. presidential election and cyber security in general, Putin said there is no need to suspect that Russia would ever dare to interfere in the U.S. presidential election. Putin said that the two countries are now planning to set up a new working group that would carefully monitor all sensitive issues related to cyber security.

Before finishing his speech, Putin stressed that Western mainstream media is trying to interfere in Russia’s internal affairs, adding that Moscow knows this, and is watching the whole thing quietly. 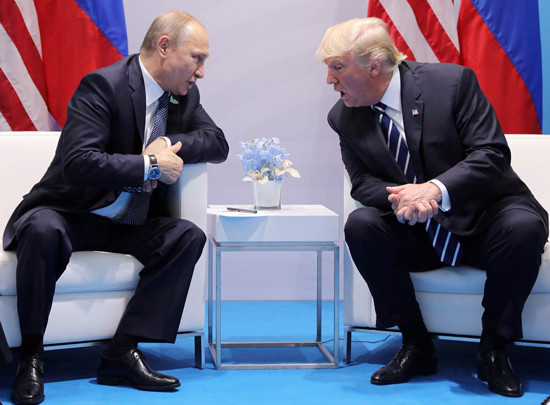 Putin warned Trump that he must expose Elite pedophile rings in the week before Hamburg played host to the historical meeting between world leaders Donald Trump and Vladimir Putin, on the fringe of the G20 summit. The encounter between to two most powerful men in the world was their first as presidents, and they discussed a range of issues in a bid to forward relations between Russia and the United States.

Ahead of this historic rendezvous, Russian President Putin has made one thing clear; that Trump must “expose pedophiles in Washington D.C.” otherwise Russia will begin “naming names”.

According to Maxim Suchkov, a member of the Moscow-based Russian International Affairs Council, no specific agenda had been set for the meeting, however, a list of “deliverables” was due to be discussed including regional issues such as Ukraine and Syria, establishing military channels of communication, and economic relations, and the “child sex trafficking problem” in the US.
Suchkov added that these matters were discussed to determine “what world would the US and Russia want to live in peacefully”.

Prior to the meeting, Kremlin spokesman and Russian foreign minister, Sergey Lavrov, highlighted some of the “deliverables” for the encounter to a Moscow audience: “I proceed from the premise that Mr. Putin and Mr. Trump understand their national interests. They want to overcome the current abnormality and start negotiating specific issues that affect bilateral relations, including business interests and the resolution of international problems.

The foundation of support for pedophilia within US politics is a global issue that must be eradicated. This level of unethical corruption must be stopped, and we have the means expose it if the US Government is unwilling.”

Lavrov went on to say that Russia will not bend to allow the West to impose “pseudo-liberal values” across the globe as there needs to be a balancing of the national interests of major powers. According to The Guardian, Suchkov said Moscow’s immediate demand was the return of two Russian diplomatic compounds, in Maryland and New York, from where its officials were expelled by the Obama administration in December in retaliation over the Kremlin’s supposed interference in the election campaign.

The White House led by Trump has explored handing back the sites, perhaps stripped of diplomatic immunity, but the issue is politically fraught in Washington at a time when the city is gripped by the Russia investigations. Heather Conley, director of the Europe program at the Centre for Strategic and International Studies in Washington DC said of the meeting, before it took place: “You can rest assured that the Kremlin has prepared well in advance for this meeting, both with a complete analysis and dossier of Mr. Trump himself as well as the goals that the Kremlin wishes to advance.”

The issue of child abuse seems to be something that Mr. Putin feels extremely passionate about. Earlier this year he imposed an outright ban on Russian children being adopted by US citizens in a stance against the pedophilia epidemic that has infected the United States.

Putin: The West is Controlled by Satanic Pedophiles 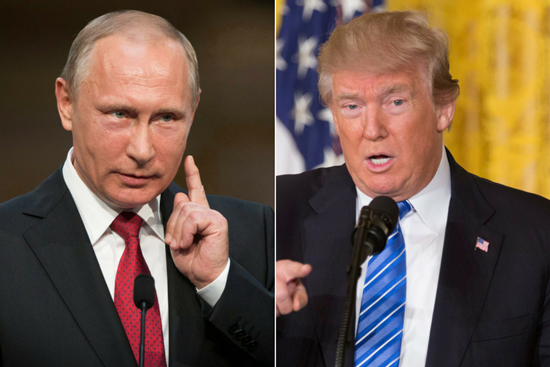 Russian President Vladimir Putin has spoken out against the epidemic of pedophile networks that have taken over the United States, UK, and other Western nations. Despite his recent successful meeting with President Trump, he remains firm on his original stance that culture in the West is being manipulated by “Satanic pedophiles”. Prior to his recent encounter with Donald Trump at this year’s G20 Summit, the Russian President issued a warning that if Trump does not expose the Elite pedophile networks, then he (Putin) would “begin naming names”.

Although the historic meeting was regarded by both parties as a success, with promising resolutions on the Syrian conflict and hacking allegations, Mr. Putin’s position on the matter of child-abusing Elites remains the same, saying: “Europe and the West thrives on a culture of pedophilia and Satanism”.

Looking forward following his meeting with Mr. Trump though, Putin said they had set the scene for a new era of cooperation describing their talk as a “breakthrough” and a “huge step forward” in the fight against the current Satanic pedophile world order.

President Putin has previous highlighted Satanism and pedophilia as one of the main challenges facing contemporary Russia. In a display of candor at the Valdai International Discussion Club, Putin described the “normalization of pedophilia” as a clear sign of “moral degradation creeping through Europe and the West”. Putin observed that “supporters of an extreme, Western-style liberalism” were overlooking the fact that military-political problems and general social conditions are worsening, with much of the world forgetting the value of basic human decency.

Focusing on the challenges faced by Russia in an international context on both foreign policy and moral flavor, Putin alluded to Satanism which he has known for a long time to be responsible for rotting the fabric of America at the core: “We see many of the Euro-Atlantic countries are actually rejecting their roots, including the Christian values that constitute the basis of Western civilization. They are denying moral principles and all traditional identities: national, cultural, religious and even sexual. They are implementing policies that equate large families with same-sex partnerships, belief in God with the belief in Satan.”

The Russian-friendly alternative media reports: “This is an astonishing comment coming from a world leader when Westerners and Europeans are accustomed to a combination of mere propaganda, rosy political rhetoric, and stock ‘manager speak’ which typically reveals nothing (and obscures reality by design).

Putin wasn’t done though, adding: ‘The excesses of political correctness have reached the point where people are seriously talking about registering political parties whose aim is to promote pedophilia.’ Another bombshell that should reverberate in the numbed minds of ‘progressive’ Europeans and fluoridated Westerners.

How many other world leaders have spoken out about the insidious and increasingly widespread normalization and promotion of pedophilia? Did Obama order mass pedophile arrests? Did either Clinton? Did either of the Bushs do or say anything meaningful about the pedophilia epidemic? (No. Have you considered that they may be too heavily invested in keeping it quiet?) Doubtless that Putin would applaud the efforts of President Trump in organizing for the arrest of some 1,500 pedophiles on American soil within a matter of weeks of arriving in the Whitehouse. Where were the ‘progressives’ and ‘liberals’ when that went down? Still crying about Hillary?”

In late 2012 (with Obama still in office), Putin actually passed a controversial bill with emphatic support from the State Duma to ban US foster parents from adopting Russian children in a move that will simultaneously protect a number of them from being shunted into child trafficking operations while also tragically denying many orphans new families.

America adopts more Russian children annually than any other nation. Putin explained: “the country will not be responsible” for the abuse of Russian children at the hands of American pedophiles. Reportedly, the Russian premier has warned that the ban will remain until President Trump takes care of the sex trafficking epidemic and lives up to his promise to “drain the swamp” of pedophile Elites in Washington D.C.
It appears likely that an elite pedophile network in D.C. uses adoption to enter children into child sex trafficking – hardly news considering the well-known saturation of pedophiles within America’s political machinery.

Further addressing the worsening moral crisis, Putin offered criticism of the erosion of traditional religion and its moral foundations, and an implicit derision of “multiculturalism” and it’s less talked about insidious effects: “People in many European countries are embarrassed or afraid to talk about their religious affiliations. Holidays are abolished or even called something different; their essence is hidden away, as is their moral foundation. And people are aggressively trying to export this model all over the world. I am convinced that this opens a direct path to degradation and primitivism, resulting in a profound demographic and moral crisis.”

Putin explicitly criticized contemporary forms of “multiculturalism”, calling it “in many respects a transplanted, artificial model… based on paying for the colonial past.” It is not a well-known fact at all that the current contrived and forced brand of “multiculturalism” so many of us have come to know, is part of the Zionist design for achieving full spectrum global domination (in this case through deliberately subverting a nation’s cultural integrity and identity – multiculturalism as a sort of Trojan horse).

Not least, in Putin’s speech was a broad allusion to and scathing critique of the New World Order a.k.a. One World Government (Zio-globalist) agenda, which amounts to global slavery, as he explained: “We see attempts to somehow revive a standardized model of a unipolar world and to blur the institutions of international law and national sovereignty. Such a unipolar, standardized world does not require sovereign states; it requires vassals. In a historical sense this amounts to a rejection of one’s own identity, of the God-given diversity of the world.”

It is evident that with Obama’s exit from the Oval Office and Trump’s entrance, Russia and America have more in common now than recent memory attains. For one thing, we could never have expected such overt mutual (US-Russian) opposition to the entrenched pedophile networks operating throughout Western politics and societies in general. Perhaps we will see the “elite” network of pedophiles and Satanists get their comeuppance in this lifetime after all.