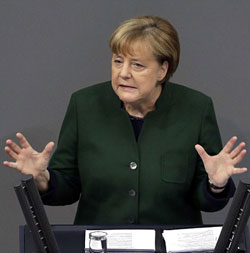 German Chancellor Angela Merkel has declared war on alternative media outlets that she says are responsible for subverting the government’s control over the public.

Merkel joined the chorus of other world leaders and huge multi-national media outlets who wish to rid the internet of alternative media websites, under the guise of “fighting fake news“.

Speaking in parliament, Merkel claimed that public opinion was being swayed away from establishment politics, claiming that independent news outlets posed a danger to national security.

“Something has changed – as globalisation has marched on, (political) debate is taking place in a completely new media environment. Opinions aren’t formed the way they were 25 years ago” she said.
“Today we have fake sites, bots, trolls – things that regenerate themselves, reinforcing opinions with certain algorithms and we have to learn to deal with them.”
Merkel, 62, said the challenge for democrats was to “reach and inspire people – we must confront this phenomenon and if necessary, regulate it.”

She said she supported initiatives by her right-left coalition government to crack down on “hate speech” on social media in the face of what she said were “concerns about the stability of our familiar order”.

“Populism and political extremes are growing in Western democracies” she warned.

In November 2016 Google and Facebook moved to cut off ad revenue to bogus news sites after a US election campaign in which the global misinformation industry may have influenced the outcome of the vote.
But media watchers say more is needed to stamp out a powerful phenomenon seen by some experts as a threat to democracy itself.

Merkel’s conservative Christian Democrats are the odds-on favourites to win the German national election, expected in September or October 2017.
But she is facing a strong challenge from a resurgent rightwing populist party, Alternative for Germany (AfD), which has her liberal refugee and migration policy in its crosshairs.

It is currently polling at around 12-13 percent which could complicate the complex maths of coalition building after the poll.
All of Germany’s mainstream parties have for now ruled out forming an alliance with the AfD.