As voices demanding the sitting US administration be brought to justice grow louder, Washington is literally in panic, since it may soon be held responsible for hundreds of thousands of civilian deaths. These concerns have recently been intensified by Hillary Clinton’s electoral defeat. With Clinton herself heavily involved in the destruction of Libya, Iraq, Afghanistan, she’s has a deep personal interest in obstructing justice.

The “panicky mood” in the White House was intensified even further with the announcement of International Criminal Court (ICC) Prosecutor Fatou Bensouda, who stated that the ICC would start investigating US war crimes in Afghanistan.

Under these circumstances, the White House has begun mobilizing the West’s corporate propaganda machine to vilify Moscow and Damascus, to divert attention away from the damage the US has inflicted upon the countries of the region, including Iraq and Syria. Western journalists have been “recommended” to hit hard at Russia, Iran, Syria so that a regular reader would assume that the humanitarian catastrophe and the exodus of migrants from the Middle East is someone else’s fault.

An extensive amount of attention has been drawn to the situation in Aleppo, as virtually all Western scenes would feature pictures of a Syrian girl allegedly rescued from the rubble “after the inhumane bombing” of Aleppo. However, a number of French sites, in particular, the Réseau international, Antipresse or Arrêt Sur Info have already declared those pictures a blatant manipulation, since the girl has been photographed in several places, photographed by three different militants of the “White Helmets” who pose as rescuers during the day only to transform into terrorists off camera. 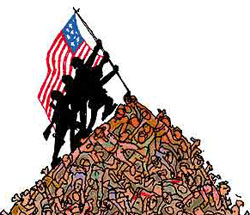 At the same time, the Pentagon tried to downplay the amount of “collateral damage” that the US Air Force has been inflicting on Iraq and Syria. In particular, according to a statement by the representative of the Central Command of the US Armed Forces, Colonel John Thomas, during the period from November 2015 to September 2016 a total of 64 civilians were killed by American airstrikes in Syria and Iraq. However, one could hardly call this number simply “inaccurate” since it is instead a blatant lie.

In January 2016, a single US airstrike in the Aleppo region resulted in 24 civilians killed and more than 40 injured. Later on, an airstrike against the Kurdish village of Sulsana resulted in 19 civilian deaths, including 3 children. In July, the village of Tokhars was burying 45 adults and 11 children in the wake of airstrikes carried out by the US Air Force. Finally, the village of Hamir lost 9 people to American bombs, including 4 children. The US Air Force claimed the lives of 167 civilians, including 17 women and 44 minors in the Syrian city of Manbij in a period from May to July 2016.

As for the Mosul assault, while it is being heralded in the West as the greatest achievement of “allied forces” to date, it’s been a massacre. On March 20, as a result of a direct hit on a local university, American pilots left 92 civilians dead and 135 more injured. On April 18, the US Air Force destroyed a local oil storage facility, killing 150 civilians in the process. Finally, on October 21, a funeral procession came under fire in Daquq, leaving behind 21 dead.

The incredibly modest evaluation of American “collateral damage” that the US admitted to has been heavily criticized by Amnesty International along with a number of various experts. The charts that the White House present them shows one civilian being killed in Iraq and Syria per 200 US airstrikes… At the same time the Pentagon admits that in Afghanistan there has been at least one civilian victim per 15 airstrikes, while the latest report from the White House shows that civilians are being killed every 50 strikes carried out against possible terrorist targets in nations such as Pakistan and Yemen. If these figures are to be applied to the number of airstrikes the US carried out in Iraq and Syria, it means that there should be at least 300 civilians killed, with a number of up to 2,750 civilian deaths being a more accurate number. 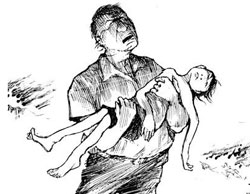 Amnesty International has analyzed the data provided by Syrian human rights activists and local monitoring organizations only to come to the conclusion that of a total of 11 airstrikes that the Pentagon launched, a total of 300 civilians were likely killed, while Washington would only acknowledge a single death, if any. In total, according to various estimates, the Syrian conflict has already claimed the lives of more than 300,000 people.

Therefore, the White House strongly spins the hysteria about the alleged guilt of Russia and Damascus in the deaths of civilians in Aleppo, without presenting any evidence, which brings us to the conclusion that this is nothing but a diversion used to shift the focus of public attention away from the unbelievable amount of “collateral damage” Washington has been inflicting on Syria illegally, considering nobody authorized their military intervention. But, as the announcement of the International Criminal Court investigation shows, war criminals are to be exposed and brought to justice, no matter how hard they may try to avoid responsibility for their war crimes.