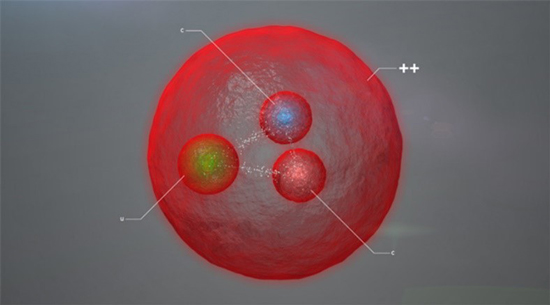 The new particle observed by LHC at CERN, containing two charm quarks and one up quark. Image by Daniel Dominguez via CERN

“New frontier” in physics has been opened after long-sought-after subatomic particle with double dose of “charm” has been discovered by the Large Hadron Collider (LHC) at CERN.

High-speed collisions in the LHC helped to discover a baryon particle called Xi cc, which could help to further explain a key force that binds matter together. Or create a parallel universe?

A long sought subatomic particle has finally been found, according to physicists at the Large Hadron Collider at CERN. Indeed, LHCb data contains more than 300 of the new Xi-cc++ particles.

This is the first time that a baryon has been conclusively observed containing two heavy charm quarks and is a new frontier in understanding the strong force that binds quarks together.

What is this new mysterious sub-particle?
A baryon is a subatomic particle made up of quarks which are elementary particles and the fundamental constituent of matter that come in six different types (two light, common types, and four heavier types). Xi cc has two heavy quarks – both of which come from a type called “charm” – and a light one.

The two heavy quarks are in a dance resembling the interaction of a star system, with two Suns and the third lighter quark circling the dancing pair.
The fact that Xi cc has two heavy quarks is significant in itself, as baryons in the natural world have only one heavy quark, at most. Despite it living only for a fraction of a second, it is actually an “appreciably long time” in the world of particle physics.
Although Xi cc has previously been theorized by scientists, this marks its first actual discovery and opens a whole new area for scientists to research.

In July 2017, the Large Hadron Collider set a series of records of luminosity that will continue to help scientists understand the mysteries of the universe.