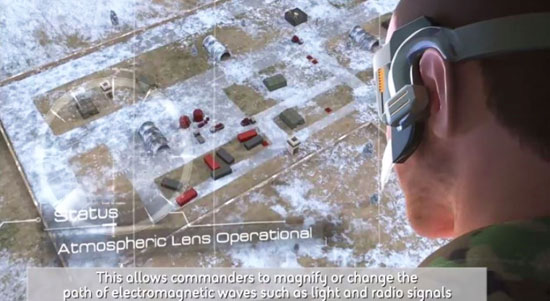 One thing that can safely be said about the military-industrial complex is that they are never short of ideas. Often outlandish and costly ideas, but they do offer up a continuous stream of mind-melting possibilities. Case in point: heating the Earth’s atmosphere with lasers to create a giant magnifying glass for enhanced surveillance.

One of the more recent military trends is the development (and imminent implementation) of lasers and electronic warfare. The concept has appeared in new proposals for drones and anti-drones that utilize the electromagnetic spectrum for “death ray” weapons like the Falcon Shield and the High Energy Laser system.

Now, scientists at BAE Systems, one of the largest defense contractors in the world, is looking to combine the use of lasers and advanced optics to literally manipulate the atmosphere into becoming both a surveillance device and a “deflector shield” to protect against the laser weapons of the future. The system is called Laser Developed Atmospheric Lens (LDAL).

This is the nature of military conflict and one of the prime reasons why the world seems to have new security threats each and every day. As new weapons are developed, nations respond… then new weapons need to be developed. It is one endless problem-reaction-solution loop that only serves to benefit those who are invested in each of the three components. At the very end, of course, are the citizens of the Earth who are left to absorb the fallout of pervasive surveillance and an ever expanding military presence in their lives.

BAE sets their timeline for this system along a 50-year trajectory; but, according to them, their plan draws upon currently accepted science.
It works by simulating naturally occurring phenomena and temporarily – and reversibly – changes the Earth’s atmosphere into lens-like structures to magnify or change the path of electromagnetic waves such as light and radio signals.

LDAL is a complex and innovative concept that copies two existing effects in nature; the reflective properties of the ionosphere and desert mirages. The ionosphere occurs at a very high altitude and is a naturally occurring layer of the Earth’s atmosphere which can be reflective to radio waves – for example it results in listeners being able to tune in to radio stations that are many thousands of miles away. The radio signals bounce off the ionosphere allowing them to travel very long distances through the air and over the Earth’s surface. The desert mirage provides the illusion of a distant lake in the hot desert. This is because the light from the blue sky is “bent” or refracted by the hot air near the surface and into the vision of the person looking into the distance.

LDAL simulates both of these effects by using a high pulsed power laser system and exploiting a physics phenomena called the “Kerr Effect” to temporarily ionize or heat a small region of atmosphere in a structured way. Mirrors, glass lenses, and structures like Fresnel zone plates could all be replicated using the atmosphere, allowing the physics of refraction, reflection, and diffraction to be exploited.

This type of atmospheric tinkering, particularly heating the ionosphere, conjures up the controversial study/use of HAARP, as well as projects like Blue Beam that reportedly would make use of holographic projections to simulate a range of visible events.

One can only speculate as to whether or not this technology will ever become reality, but it is a guarantee that military mad scientists will be working on it.
View their video below in order to better understand the concept.