That’s the doomsday claim from a conspiracy theorist who believes Nibiru is hurtling towards us on a path of destruction.

Nibiru’s the “cross” Earth periodically suffers and enjoys. The suffering which Nibiru brings Earth: rain, flood, earthquake; the joy: technological advances Nibirans give us. Sumerians and cultures that grew from them show Nibiru as a winged disk and a cross “for every 3,600 years kept crossing Earth’s orbital plane, the place where Nibiru hit Proto-Earth.”

Nibiru’s also the “winged globe,” home of the top “god.” “Rulers of Sumer and Akkad, Babylon and Assyria, Elam and Uratu, Mari and Nuzi, Mitanni and Cannan, Hittite Kings, Egyptian Pharohs, Persian Shar’s”– as well as the ancient Hebrews–thought Nibiru the home of the supreme god.

“All the peoples of the ancient world considered the nearing of Nibiru a sign of upheavals, great changes and new eras, expected to cause rains and flooding, [due to] its strong gravitational effects,” which include “arrest in Earth’s spin on its own axis” for one day. Earthlings believed that when Nibiru showed “peace and justice would settle upon Earth” and “the Lord shall judge among the nations and repute many people” in “rains, inundations and earthquakes.”

Evil Wind and Nibiru broke Earth’s crust into slabs. Then “Earth evolved and attained the shape of a globe dictated by the forces of gravity, the waters gathered into the cavity on the torn-off side. Dry land appeared on the other side of the planet. Breakup of the Earth’s crust, plate tectonics, differences between continental and oceanic crusts, emergence of a Panggaia [a single continent] from under the waters, the primordial encircling ocean” led our scientists to confirm the Nibiran model of Earth formed after Evil Wind hit Tiamat.

Nibiru appears “from the south and moves clockwise.” It first aligns with Mercury “30 degrees” to the ecliptic. “As it nears Earth, Nibiru rises another 30 degrees,” crosses Jupiter’s orbit and reaches perigee at “the Place of Crossing” where Nibiru struck Tiamat. Then Nibiru starts “back into distant space.” 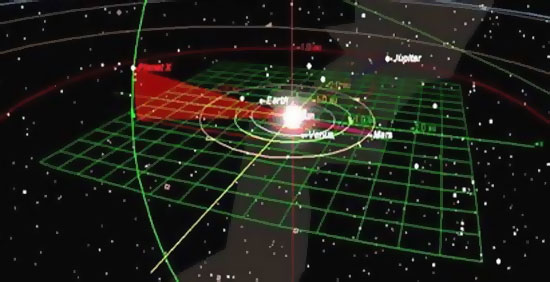 Major unheard of changes are currently appearing on the surface and atmosphere of the sun and all the planets. Astronomer Mike Lockwood from California’s Rutherford Appleton National Laboratories found that since 1901 the sun’s overall magnetic field has increased by 230%. Solar flares and storms have also increased. The earth’s moon now has a 6000 kilometer-deep atmosphere of Natrium that it never had before. Mercury, the planet closest to the sun, now has grown polar ice. Venus’ brightness has skyrocketed by 2500% and experienced major changes in its atmosphere in the last four decades. Meanwhile, further away from the sun than the earth, Mars has melted polar icecaps and its magnitude of storms has strengthened exponentially.

Effects from a diminishing magnetic field would double the amount of radiation causing an epidemic of skin cancer deaths, speed up climate change and magnify extreme weather. Solar winds would eliminate ions that allow the earth to retain water and air. All these horrific changes are happening right now. What next to no scientist who wants to stay alive is revealing is that this torrid rate of ecological degradation and life killing earth surface change are more than likely caused by Planet X racing ever-closer toward us.

Asked whether he knew Nibiru’s expected arrival date, Dr. Trowbridge admitted that conflicting information prevents him from expressing a definitive answer. “All data seen suggests Nibiru will ultimately cross between 0.3 and 0.5 au (astronomical units) between the Earth and Sun. I can’t give you a date; I was never privy to that information. Regardless, we are in peril now.”

“This is what I’ve been warning people about for years,” said Dr. Trowbridge.

“Trying to convince people that drastic climate change is not a product of greenhouse gasses or chlorofluorocarbons being released into the atmosphere. Nibiru is real, and it is here. Recent storms and quakes—the odds of the events naturally occurring in nature are about 3×1058. In other words, nearly impossible. And things are getting worse.”

He said the evidence to support the apocalypse is “overwhelming” pointing to what he said were “40 volcanoes erupting at the same time” and “earthquakes dramatically increasing”.

He claimed: “The Elite are frantically building underground safety bunkers.”

Want to know what our elite people are up to? Well, check this out. See just how many are rushing to get their bunkers built? What do they know that we don’t? Never before has there been such a panic to construct these facilities. If you dig deep enough, you will find out more facts or you can just dismiss all these facts and carry on with your normal existence until the SHTF.

The rich do not waste money on shelters because of rumours; they use their money wisely and that is why they are rich, so my advice is to watch what they do and heed the warning and the evidence.

“The public is being kept in the dark deliberately to avoid panic. Storm systems are multiplying both in type, intensity and size .ˮ

“Sinkholes and cracks are appearing in the earth’s crust.ˮ

Conspiracy theorists believe the gravitational influence of the “rogue planetˮ Nibiru disrupted the orbits of other planets hundreds of years ago.

This report warned of a future era of “rioting and nuclear war” during which time Great Britain will become like “Siberia” encased in snow when “whole nations walking by foot” seeking to find new homelands would not be unrealistic in such a catastrophic environment. This Pentagon Report “predicts that abrupt climate change could bring the planet to the edge of anarchy as countries develop a nuclear threat to defend and secure dwindling food, water and energy supplies. The threat to global stability vastly eclipses that of terrorism, say the few experts privy to its contents.”

What about North Korea? Kim Jong-un is going to test a nuclear bomb. What is the underlying reason to allow him to do that? Is it because they want nuclear war and, if so, why?

Already, according to Randall and Schwartz, the planet is carrying a higher population than it can sustain. By 2020 “catastrophicˮ shortages of water and energy supply will become increasingly harder to overcome, plunging the planet into war. They warn that 8,200 years ago climatic conditions brought widespread crop failure, famine, disease and mass migration of populations that could soon be repeated.

Randall told The Observer that the potential ramifications of rapid climate change would create global chaos. “ This is depressing stuff,ˮ he said. “It is a national security threat that is unique because there is no enemy to point your guns at and we have no control over the threat.ˮ

Randall added that it was already possibly too late to prevent a disaster happening. “We don’t know exactly where we are in the process. It could start tomorrow and we would not know for another five years,ˮ he said.

“The consequences for some nations of the climate change are unbelievable. It seems obvious that cutting the use of fossil fuels would be worthwhile.ˮ

Whether it’s preparedness for war, floods, earthquakes, hurricanes, or fires, the key to survival in disasters is planning. Use our preparedness section to stay informed, make a plan, and most importantly –remain safe in an emergency.

One of the best ideas suggested through The Lost Ways is the construction of bunkers. These bunkers have the potential to stand the impact created by the most devastating earthquake or missile attack. On the other hand, the readers will be able to learn how to preserve their food in a natural manner. They can also get to know about effective tips, which can be used to preserve the precious water supplies. Then we will be able to use them in the case of a disaster to survive.

First of all, The Lost Ways would convince readers that the natural disasters are inevitable. It will give them an excellent insight about the disasters that could take place in the future. Therefore, it is extremely important for all the human beings to stay prepared to face a disaster, which could happen at any given point of time. In the second part of this book, the readers will be able to discover the lessons learned by humanity when they encountered disasters in the past. Every disaster teaches us a lesson, and it is better to have a clear understanding of these lessons as they can be helpful in the future.