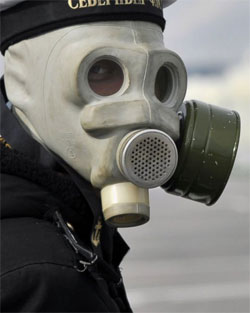 As tensions between Russia and the West were intensifying this past spring, NATO forces were building up in Eastern Europe, and those units weren’t just in place as a bluff. They were actively training for war with Russia, and they weren’t hiding that fact.

Someone looking closer at these training exercises, could learn a lot about how NATO expects to conduct a war with Russia. You’ll see that they aren’t just engaging in simple maneuvers, and they aren’t just preparing for a strictly defensive war. In fact, they may be preparing to take the fight to Russian speaking parts of Europe.

Germany for instance, recently placed an ad on a government website, for actors to play a part in US Army training exercises. What’s so shocking about this, is that they are specifically looking for people who speak Russian. That may sound like common sense. If our military is going to prepare itself to engage Russian forces, then obviously they should have some experience dealing with Russian speaking people. However, these people aren’t going to be playing as Russian soldiers. According to SputnikNews, the starting date was April 26. “All participants must have good knowledge of Russian, English and German. It would be a great advantage if they also know Polish or Czechˮ, the advertisement said.

“Candidates will play the role of civilians in conflict zones. This will help to create a real training scenario for servicemen and their optimal preparation for foreign missions,” the description said.

The exercises will be held continuously, including on weekends, in the Hohenfels training grounds between Nuremberg and Regensburg. There about ten villages will be built with 30 houses each.

“Performers will play small roles such as livestock keepers, shopkeepers or the head of the village in Afghanistan, who is constantly negotiating with the US military and takes part in the mediation.”

Of course it’s possible that they are only training to defend NATO countries in the Baltic region, which have a significant population of ethnic Russians. However, the fact that some of these actors will be playing “livestock keepers” is very telling. The vast majority of Russians living in Baltic countries reside in cities. Plus, these exercises are supposed to take place in multiple “villages”. Clearly the Army wants to train for combat in a rural, Russian speaking area.

Because of that, it seems more likely that these training exercises will be preparing allied troops to fight outside of NATO. If not in Russia itself, there’s a good chance that they’re training to fight in Eastern Ukraine, a region that is hotly contested, heavily populated with Russians, and except for the city of Donetsk it is a very rural area with a high agricultural output. If this is true, then NATO is getting ready to play a very dangerous game at the doorstep of Russia.