One million people rise up in France amid media blackout

Over one million people took to the streets in France this June (2016) in protest against an ever-increasing totalitarian French government, in some of the largest anti-government protests the country has ever seen. 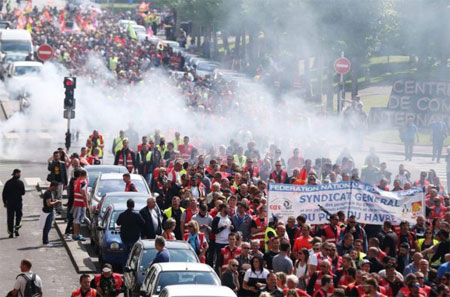 On Tuesday June 14, witnesses described “war zone” scenes in the capital Paris, as the mainstream media failed to report on the biggest revolution in France’s recent history.

Winteroak.org.ukreports:
“The Paris march was led by the biggest autonomous bloc that has been seen in the city for several decades, with a strong international anti-capitalist participation.

It was attacked repeatedly and brutally by police using all the militaristic weaponry at their disposal – not just the usual batons, tear gas and grenades but also two water cannon, used in Paris for the first time.

Protesters responded to the police attempts to split the march with much determination and hails of stones.

Near the Duroc metro station, scene of some of the fiercest fighting, windows of the France’s overseas territories ministry were broken and its walls covered with graffiti – it was renamed the Ministry of Colonies.
Other buildings, from banks and estate agents’ to Starbucks were also targeted.
There were said to have been 58 arrests. The authorities ridiculously claimed only 40 people were injured, of whom 29 were supposedly cops and only 11 protesters! In reality, hundreds of protesters were hurt, many seriously, according to activist website Paris Luttes.Levels of police violence and the cops’ utter contempt for the welfare of injured protesters are well illustrated by these shocking videos.

After the main march, protesters regrouped in the evening for further unauthorized protests, which were again attacked by cops – notably the fascistic plain-clothed thugs of the ‘Bac’ (‘Anti-criminal brigades’).

This was the biggest turn-out yet against the Loi Travail, but still the state refuses to change its neoliberal course.

Instead it is now threatening to ban future protests if there is no ‘guarantee’ that property and people will not be threatened.”