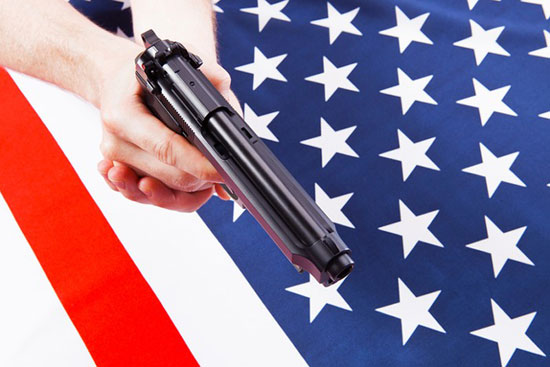 “The United States has been under the complete control of the ‘Very Deep State’ (much deeper than Deep State) for decades. The ‘Very Deep State’ (VDS) uses the alphabet soup agencies of the U.S. Intelligence Community to monitor and police every sphere of life in American society. Just like the Soviet Union of the last century, there are no secrets. Only now there really are no secrets anywhere in the 50 states. Not only is there is a vast network of undercover citizen spies who operate in every county, agents of the VDS are surreptitiously inserted into every organization of note nationwide. The present National Security State, with its full-spectrum surveillance regime and spying apparatus, actually functions as a full-blown, communist police state (where the FBI=KGB, literally). The Shadow Government (a clandestine, autocratic and all-powerful global entity), that oversees the U.S. Federal Government, uses Operation Gladio C (via NATO command and control) to manufacture consent via government-sponsored terrorism. Mass shootings, in particular, are methodically used in this way to terrorize the body politic into supporting draconian measures that erode national sovereignty. Undermining the American Republic is the single most important objective of Operation Gladio C. Other nations are experiencing their own versions of Operation Gladio C as seen throughout the European Union, the Middle East, South Asia, Central and South America, Mexico, etc.” – Intelligence Analyst and Former Military Officer

The United States of America has been under relentless terror attacks by foreign and domestic agents of the New World Order globalist cabal. All of these false flag terrorist operations are carried out under the rubric of Operation Gladio C, a super-secret enterprise and organizational derivative of NATO’s notorious Operation Gladio. This article explains how Obama illicitly completed the legal framework which permits this state-sponsored terrorism on U.S. soil.

“False Flags” Are Legal Propaganda Produced by the Department of Defense

“Operation Gladio” is well-known throughout intelligence circles and military leadership worldwide as a covert and ongoing NATO-run terrorist operation. Those intel and secret service agents, with firsthand knowledge of NATO’s many false flag terrorist attacks conducted in Europe and the United States, quietly call it the “North Atlantic Terrorist Organization”.

That’s not to say that Operation Gladio (OG) conducts their terror attacks by themselves. There is now a massive body of evidence – circumstantial, anecdotal and hard proof – on the Internet which points directly to their intimate collaboration with the CIA, FBI, NSA, DHS (Department of Homeland Security), DOD (Department of Defense), local law enforcement, as well as many other silent partners (e.g. SERCO) in the execution of the OG black operations.

Virtually every mass shooting and bombing that has taken place in the USA since President John F. Kennedy held office has been carried out according to the dictates of Operation Gladio C.

An objective assessment of the three biggest bombings on the U.S. mainland since 1990 clearly indicates government-sponsored terrorism. Even though the official record does not indict (or even indicate) any government participation (FBI, ATF, CIA) with these major terrorist attacks, they simply could not have been conducted without the U.S. government’s foreknowledge and active involvement with the transparent cover-ups:
– 1993 World Trade Center bombing;
– 1995 Oklahoma City bombing;
– 2001 attacks on World Trade Center and Pentagon.

Furthermore, it has been proven, both scientifically and practically, that each of these bombings could only have been executed with the support of criminal elements within the FBI as well as other rogue agencies within the U.S. Federal Government. In each case, those who were accused and/or indicted of these grievous crimes were falsely convicted and harshly sentenced for atrocities they did not commit.

To “successfully” implement these foregoing major criminal conspiracies required a massive and highly organized network of co-conspirators. Such a sophisticated network must have had the full cooperation of the U.S. Intelligence Community to include the CIA, FBI, NSA, and DIA at the very least.

Because of the sheer depth and breadth of these false flag black operations, these three major attacks on America must have also received tacit approval and material support from countless agents of Deep State throughout all three branches of the U.S. government. The entire Military-Industrial Complex as well as the Silicon Valley Tech Corporations are likewise conscripted to support these blacktops.

This is exactly how Operation Gladio C works. It utilizes the very same strategies and tactics that Operation Gladio A and B use only applies them specifically to domestic mass casualty events (MCE). These meticulously staged attacks are executed as false flag operations designed to terrorize the American people.

Terrorism by its very nature creates an atmosphere of extreme tension (and fear) wherever it is perpetrated. The very purpose of Operation Gladio C is to generate so much tension throughout the United States that the body politic will concede to whatever demands the political class is cynically legislating on behalf of their NWO masters. In fact, laws are now systematically made this way; manufactured consent paves the way for oppressive legislation that further imprisons the citizenry.

It was the deliberate implementation of this “strategy of tension” throughout Europe that allowed the totalitarian superstate – European Union (EU) – to be established. The false promise to eliminate war between member nations was held high as a byproduct of the EU. So was the false expectation to eradicate terrorism Europewide which has significantly increased.

Ever since the 9/11 false flag terrorist attacks – another Operation Gladio project – the United States has seen a dramatic uptick in state-sponsored mass casualty events. Many of these have taken the form of mass shootings and bombings. However, it is specifically school massacres via a lone gunman which have disproportionately increased.

While the Las Vegas massacre is an obvious exception to the pattern, that October 1, Harvest Music Festival shooting spree was a typical Operation Gladio C psyop. Which is exactly why it disappeared from the Mainstream Media (MSM) new reports so quickly; it contained inexplicable elements that revealed it to be a very sophisticated and highly organized CIA-directed, FBI-protected black operation.

When these mass shootings are staged in schools, it’s clear that there is a very purposeful agenda. Not only did the recent Florida high school mass shooting produce a torrent of MSM coverage (sometimes known as Operation Mockingbird propaganda), it was all focused on stripping the American people of their gun rights with the ultimate goal of repealing the Second Amendment. The Parkland, Florida mass shooting also served to change the national conversation from the ever-worsening FISAgate scandal, which it did.

Mass Shootings: Brought to the USA by Operation Gladio C 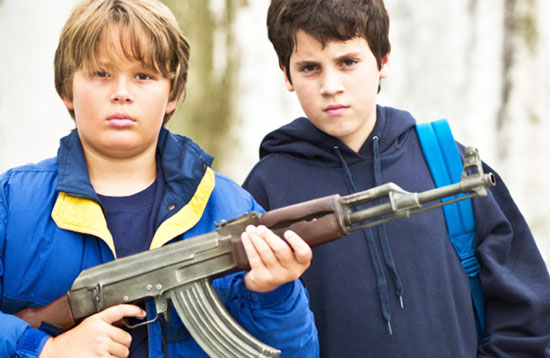 It’s essential to understand the correct organizational structure which is responsible for coordinating and executing these never-ending school massacres. Operation Gladio C is the code name given to over-arching strategic plan which guides these black ops.

The primary reason that homegrown terrorists are trained to commit acts of domestic terrorism under the command of Operation Gladio C is that military officers cannot disobey orders. If they do, they risk their careers. They also make themselves vulnerable to prosecution, which is conducted under a cloak of secrecy due to bogus “national security” concerns. This is similar to the patently illegal chemtrail spraying program, which is also a massive military operation directed by the U.S. Air Force and known as Operation Indigo Skyfold.

The peak decision-making process is informed by the central planners within the US military and NATO leadership who have overseen the European franchise of Operation Gladio since World War II. Operation Gladio is still very much in play today as they were when Red Brigade bombings were terrorizing Europe in the 1970s and early 1980s. The recent terrorist attacks on the European Continent are also a testament to this as are the Al Qaeda, ISIS and Daesh terror mass casualty events (MCEs) staged across the Middle East.

In the US, all of the necessary organs of government are involved with the planning and execution of the MCEs which are required for flawless execution. The US Army, FBI, CIA, DIA (Defense Intelligence Agency), DHS, ATF (Bureau of Alcohol, Tobacco, Firearms and Explosives), local law enforcement each have their respective roles to play, but they do so on a strictly need-to-know basis and in a highly compartmentalized fashion. This ensures that no single entity or individual knows too much or can compromise these exceedingly covert black operations.

In an effort to guarantee success and avoid exposure of the MCEs, the Federal Bureau of Investigation is always chosen to play a crucial role. As the nation’s premier law enforcement agency, the FBI is assigned to control the crime scene just as they control the narrative that is fed to the media. They do this both upfront during media blitzes and from behind the scenes. Who can ever forget the FBI special agent hovering over the Las Vegas sheriff during the press briefings in the wake of the Las Vegas shooting psyop? 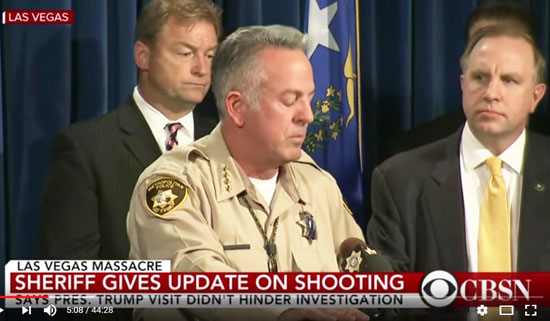 The number of incidents that define the FBI as a stone-cold secret state police force are too many to catalogue here. Nevertheless, it’s now clear that the Bureau has always operated as a jackbooted gang of heavily armed thugs. Here’s another short (yet more comprehensive) list of just a few of the FBI’s most heinous crimes and profound betrayals against the American people. Some of these institutional crimes were perpetrated in close coordination with the Bureau of Alcohol, Tobacco, Firearms and Explosives (ATF), another rogue agency:
– 2001 Cover-up of 9/11 terrorist attacks;
– 1995 Oklahoma City bombing;
– 1993 World Trade Center bombing;
– 2017 Las Vegas mass shooting (crimes and cover-up);
– 1993 Waco siege and firebombing;
– 2015 Twin Peaks shootout in Waco TX;
– 1992 Ruby Ridge murders of Randy Weaver’s wife and child;
– 2016 Oregon murder of patriot LaVoy Finicum.

Many bikers wondered how the ATF was on the scene so fast at Twin Peaks as were FBI agents and county sheriffs. Some were convinced that undercover feds actually started the shooting.
Hence, it ought to be apparent that only a Stasi-styled agency could be intimately involved as an accomplice in such a broad range of criminal activities as these.

The brutal reality is that the FBI truly functions as the American secret state police as it was established to be. Given the many shocking disclosures that have come out since Trump’s presidency, it’s evident that the FBI is a rogue federal agency that has absolutely nothing to do with law enforcement. The FBI operates much more like a protection racket providing muscle and implementing cover-ups whenever necessary.

The myriad crime sprees that the FBI facilitates and/or covers up are actually committed by career criminal politicians, corporate crooks, international banksters and an assortment of other high-level gangsters and felons. The list of VIP lawbreakers literally reads like a Who’s Who of American high society.

There’s no better example of this than the Clinton Crime Family (some really believe assassins Bonnie & Clyde reincarnated as Hill & Bill). There’s now hard evidence scattered throughout the public domain which demonstrates the complicity of the FBI in the ongoing Clinton crime wave. That crime wave began long before the recent spate of Clinton scandals variously known as: Russiagate, FISAgate, Dossiergate, Intelgate, Uraniumgate, Emailgate, Weinergate, ISISgate Benghazigate, etc. Many believe that the multitude of institutional abuses of FISAgate alone demands that the FBI be shut down… for good!

How To Spot A Media Psy-Op