Also we must take into account that the ancient studious of Egypt counted on an overwhelming quantity of sunny days and clear nights, united to the fact of living near to a South/North river which became a vital address.

All what is above-mentioned carries to the fact that the first obelisks could have been “SOLAR COMPASSES”.

Here is the elaboration:

Observing the shadow that a post fixed upright produces, it is easy to see that upon dawn it is directed approximately to the West.

When the day advances, this shadow is shortened and moves to the North – in that hemisphere – for, once past noon, lengthen again while going to the East. (see fig. 1)

Of course, in the summer the shadows of noon will be shorter and also will vary in length according to the latitude where the post is located, which does not affect the solar compass. 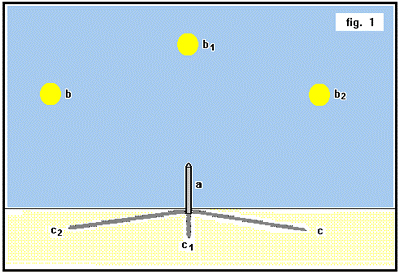 In the moment of the noon, the shortest shadow is produced and that shadow invariably points to the geographical North in that hemisphere (see fig. 2) – with the exception of a post that intersectes the ecliptic, where at noon there will be no shadow at all. 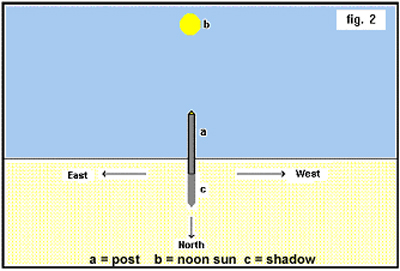 Construction of a solar compass:

On a previously leveled area, dig a hole that will serve to house the post to employ.

Trace a semicircle directed visually approx. to the North. This is of easy accomplishment, using a cord and a sharp pointed element. (see fig. 3) 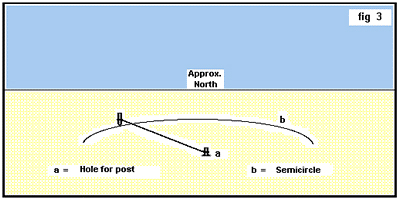 The radius of this semicircle (ab) has a direct relationship to the height of the post to be installed and it must be somewhat bigger than the shortest shadow of same (noon).

Figure 4 shows the post, its semicircle and the corresponding morning shadow. 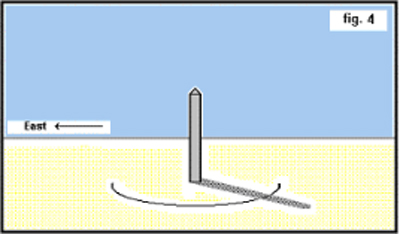 While the morning advances, the shadow will be shortening and moving towards the semicircle until it “cuts” it, subsequently “traveling” the interior of same and returning to “cut it” upon leaving, sometime in the afternoon. (see fig. 5 and 5a) 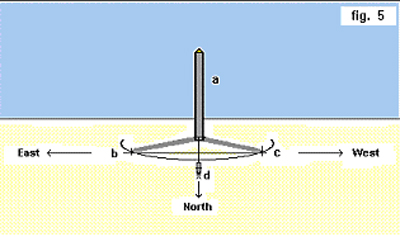 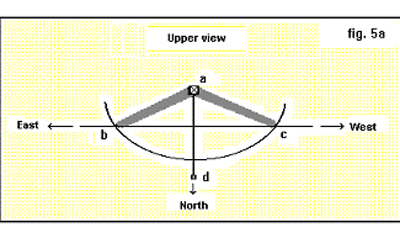 Once the entry and exit points of the shadow are marked (c and b), a straight line between both is traced. Another line that, departing from the post (a), crosses the middle of the segment bc, will indicate the geographical North.

Marking now a new point (d), there will be an easy method to locate and mark the cardinal points, since, departing of the intersection of these lines, “d” indicates the North, “b” the East, “c” the West and the post, the South.

With respect to the size of the post it is important to emphasize that the higher, the easier it is to visualize the moment of the shadow crossing the semicircle, but less defined will be same.

The transferring of these direction lines will be treated below.
To achieve this goal, it is convenient to use the Egyptian plummet. (see fig. 6) 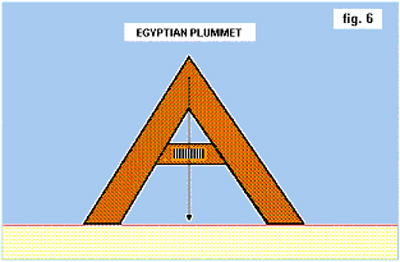 As can be deduced, this plummet has the advantage of having its own support, at the same time that it controls the uprightness, which makes it useful for the transferring of the marked points. It serves also as an inclinometer.

To continue the South-North line, we will proceed in the following way:

A stake will be introduced in the hole of the solar compass’ post (point “a” of fig. 5 and 5a). The same post can also be used.

Returning to fig. 7, the workman nominated with the number 4 stretches the cord pulling from its extreme. The workman number 2 will put his plummet on the mark that indicates the middle of the segment bc in figures 5 and 5a.

Workman No. 4 will move the cord horizontally, until workman 1 indicates to him that the cord touches the thread of the plummet of workman No. 2.

In that moment, workman 3 will put his plummet, taking care that the thread of same meets the cord. This plummet will indicate the point of the South-North line that is shown as “d” in the upper view of fig. 5a.

Successive stakes and/or points marked in the area will permit to prolong construction lines, but the correct alignment of same should be verified by means of the solar compass.

Of course, in the event of transferring East-West lines, points “b” and “c” of figures 5 and 5a will be used.

It is conceivable that also other types of compass existed, based on the alignment of two posts (or obelisks) with respect to the sunrise and in the obvious knowledge of the ancient Egyptians of the different positions of those sunrises pursuant to the days of the year. 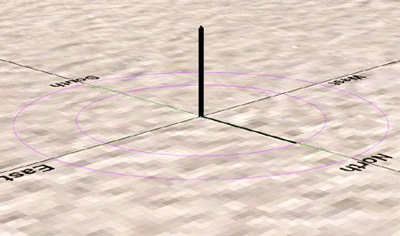 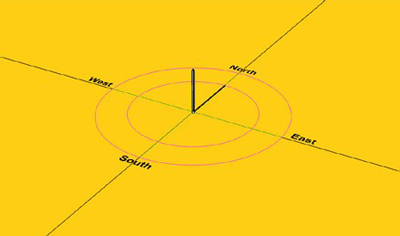 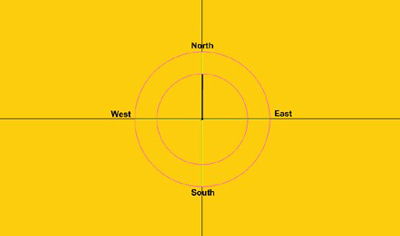 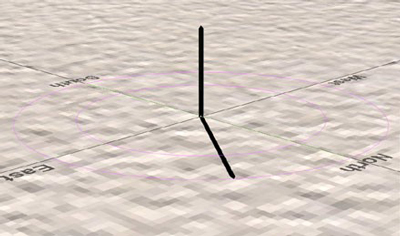 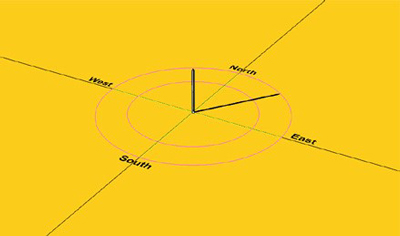 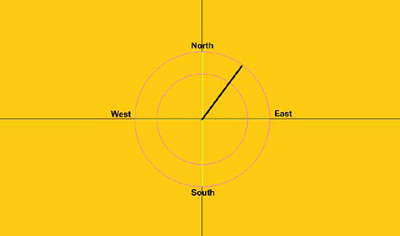 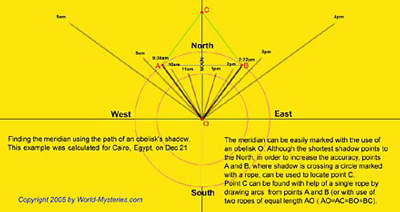