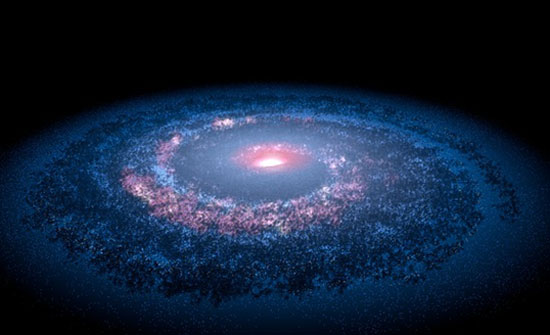 This enormous region of nothingness is pushing our galaxy at the blazing speed of 2,000,000 km/h.

Our galaxy is moving fast too in time and expanding with the universe at “only” 630 km per second. If that still doesn’t prove that we are in constant motion, we don’t know what will.

The big question is: what is driving the Milky Way to move at such astounding speed?

Initially, cosmologists believed that the Great Attractor – a dense area of the Universe composed of clusters of galaxies 150 million light-years from the Milky Way – was responsible for pulling our galaxy through space, hence the name the “Great Attractor”. Later on, other astronomers suggested that it was the Shapley Concentration – a region made up of over two dozen galaxy clusters located around 750 million light years away – that was propelling the Milky Way.

In spite of the tremendous pull being exerted by both the Great Attractor and the Shapley Concentration, it could not entirely account for the Milky Way’s motion. This is what led to the belief that another force must be in play – an opposite kind of force that’s pushing instead of pulling. This notion has now turned into fact.

Based on collaborative research done by Professor Yehuda Hoffman of the Hebrew University’s Racah Institutes of Physics, and scientists from France and Hawaii, the Milky Way is not just being pulled. It’s being pushed as well. And the pushing is being done by a previously unmapped empty region in our universe which is affecting not just our own galaxy, but Andromeda too – our companion galaxy. They’re calling the region as “Dipole Repeller” because it repels instead of attracting.

The presence of this intergalactic void is not new. It’s just that astronomers were having a hard time proving that it existed. Until now.
Rather than observing the distribution and position of galaxies, the researchers focused instead on the movement of over 8,000 galaxies. By doing so, they were able to create a 3D map of the so-called “galaxy flow field”. From this, they were able to infer the distribution of stars and dark matter. And this led them to conclude that just as there are densely populated regions pulling on galaxies with their intense gravitational force, there are also underpopulated regions pushing galaxies away.

With the Dipole Repeller now in the picture, the explanation on why the Milky Way is moving as it does is now complete. And with the discovery of this cosmic void, it is hoped that we’ll be another step closer to understanding the universe better.

The research has been published online through Nature Astronomy.