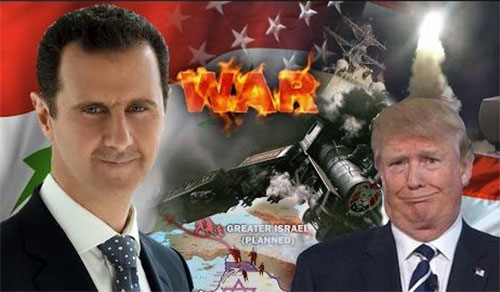 The Israeli regime or the Neocons in the United States have total control of the Trump administration with respect to the situation in Syria. If you don’t think so, then a recent statement by the Pentagon may draw you to that conclusion.

The Trump administration has recently released a statement saying that Assad is preparing to launch a chemical attack again on his own people, which would give the United States “legitimate” reasons to attack the Syrian government again. The New York Times itself declared that:
“Several military officials were caught off guard by the statement from President Trump’s press secretary…”

In other words, no one knew where the Trump administration got the idea that a chemical attack by the Assad government was imminent. The Times suggested that they got it from America’s ally, Israel: “Any intelligence gathered by the United States or its allies — notably Israel, which keeps a robust watch on unconventional weapons in the Middle East — would by nature be classified.”

Assad or Russia or Iran ought to take responsibility for any use of chemical attack in Syria, says devoted marionette Nikki Haley. “Any further attacks done to the people of Syria will be blamed on Assad, but also on Russia & Iran who support him killing his own people.”

These people are obviously acting like children and little babies. They continue to call CNN and other Zionist outlets fake news, but they accept the Israeli lie that Assad continue to use sarin gas on his own people without question.

But Trump betrays Americans by selling his soul to the Israeli regime, which never ceases to drink the blood of precious men, women and children in the Middle East. The Trump administration is now concerned that Assad “used” chemical weapons, but they are not concerned about “the continuous usage of children” in the Iraqi armies and militias. They are “concerned” about civilians in Syria, but civilians in Iraq and Afghanistan don’t mean a damn thing to them.

Just in May, more than three thousand people lost their lives in Iraq. “At least 770 civilians, 166 security personnel, 2,066 militants, and 48 members of the Kurdistan Workers party were killed during May.” Ask any CNN reporter or MSNBC if they are willing to write a report on this. The answer may surprise you.

Slavery is Freedom: Submit to the State and be Free from Terrorism