Pokémon Go, the CIA, «Totalitarianism» and the Future of Surveillance 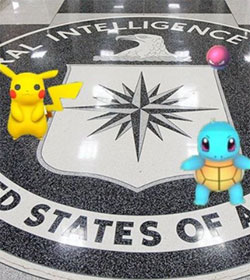 If anyone doubted that a percentage of the global population are akin to zombies, the incidents following the release of Pokémon Go have surely convinced you. The game was being released in early July 2016, and few days later we have already seen a man driving into a tree and a women getting locked in a graveyard whilst chasing these furry little creatures.

Pokémon Go, Google, the State Department, the CIA and the DoD

The company behind Pokémon Go is a San Francisco software developer called Niantic Inc, which was formed in 2010 as an internal startup at Google. The founder and current CEO of Niantic is John Hanke, a man who has connections both to the State Department and the CIA.

Before moving to San Francisco to study at the University of California, Hanke previously worked for the US State Department in Myanmar. Hanke also founded Keyhole, Inc in 2001, a company which specialized in geospatial data visualization applications. Google acquired the company in 2004, with many of the applications developed by Keyhole being instrumental in Google Maps and Google Earth. In 2003, the CIA’s venture-capitalist firm, In-Q-Tel, invested in Keyhole, with the CIA’s own website proudly detailing this investment:

The CIA-assisted technology probably most familiar to you is one many of us use on a regular basis: Google Earth. In February 2003, the CIA-funded venture-capitalist firm In-Q-Tel made a strategic investment in Keyhole, Inc., a pioneer of interactive 3-D Earth visualization and creator of the groundbreaking rich-mapping EarthViewer 3D system. CIA worked closely with other Intelligence Community organizations to tailor Keyhole’s systems to meet their needs. The finished product transformed the way intelligence officers interacted with geographic information and earth imagery.

One of the other intelligence organizations the CIA worked alongside was the National Geospatial-Intelligence Agency (NGA), which is partly under the control of the US Department of Defense (DoD).

So we have a somewhat enigmatic former State Department employee with connections to the CIA and the DoD, being the CEO of a company that created what seems to be a silly, harmless game. What’s going on?

Selling and Sharing Your Data 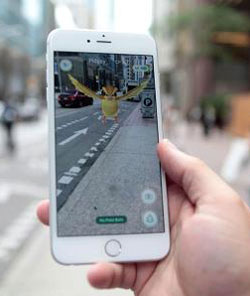 Like so many new technologies in our digital age, Pokémon Go is constantly gathering information on the user and then openly admitting that they will share this data with anyone who wants it.

As James Corbett pointed out in his article titled The CIA’s ‘Pokémon Go’ App is Doing What the Patriot Act Can’t, the privacy policy of the app states that Niantic will share all the information they gather (which is a lot) with the state and private organizations: “We cooperate with government and law enforcement officials or private parties to enforce and comply with the law. We may disclose any information about you (or your authorized child) that is in our possession or control to government or law enforcement officials or private parties as we, in our sole discretion, believe necessary or appropriate.”

Oliver Stone on Pokémon Go: “totalitarianism” and a “new level of invasion”

Speaking at 2016’s Comic-Con, Oliver Stone – the award winning filmmaker and director of the new film on Edward Snowden – had some very insightful views on the new craze and the growing business of data-mining. As Vulture magazine reported in a recent article, Stone denounced the game as a “new level of invasion” and a new form of “totalitarianism:”

“I’m hearing about it too; it’s a new level of invasion. Once the government had been hounded by Snowden, of course the corporations went into encryption, because they had to for survival, right? But the search for profits is enormous. Nobody has ever seen, in the history of the world, something like Google – ever! It’s the fastest-growing business ever, and they have invested huge amounts of money into what surveillance is; which is data-mining.”

Stone continues: “They’re data-mining every person in this room for information as to what you’re buying, what it is you like, and above all, your behavior. Pokémon Go kicks into that. It’s everywhere. It’s what some people call surveillance capitalism; it’s the newest stage. You’ll see a new form of, frankly, a robot society, where they will know how you want to behave and they will make the mockup that matches how you behave and feed you. It’s what they call totalitarianism.” 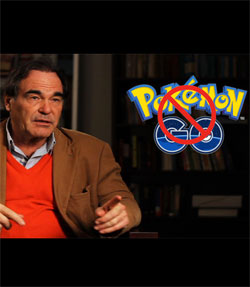 It is interesting that Stone doesn’t just warn about the commercial aspect of data-mining, but the fact that the more data governments and private corporations collect on the citizens of the world, the easier it becomes to predict their behavior. It is not just Stone that is warning about this reality, however. At the start of 2016, the UK governments own surveillance commissioner, Tony Porter, revealed how data obtained from CCTV cameras can be used to “predict behavior”.

As we progress through the 21st century and more advanced algorithmic systems are developed to process the tsunami of data, intelligence agencies and governments will increasingly be able to predict (and manipulate) the behavior of their populations and the populations of foreign countries. We are already far along this path, will the trajectory for the future heading straight towards levels of surveillance far beyond even what George Orwell envisaged; with the fight for digital privacy being a major battleground in this century for those who value freedom.

Pokémon Go looks more like a Trojan horse of the CIA and the wider intelligence-security-data-mining-Big-Brother complex, than just a silly, innocent game. With all these connections to the State Department, the CIA and the DoD, no wonder some countries are reportedly considering banning the game.