In the summer of 2016, China set aside $30 million for a controversial project that involves shooting salt-and-mineral-filled bullets into the sky.
Their mission? Make it rain. 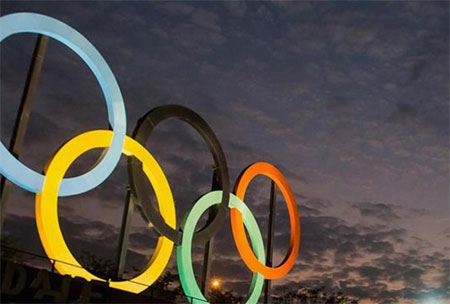 The project is part of a larger campaign of so-called weather modification techniques that the country has been using since at least 2008, when they claim to have cleared the skies for the Beijing Olympics by forcing the rain to come early.

China is far from being the only nation trying to bring (or stop) the rain. At least 52 countries – including the United States – have current weather modification programs, 10 more countries than five years ago, according to the World Meteorological Organization.

It all started in the 1940s, when a pair of scientists from General Electric Co. were experimenting with using super-cooled clouds to stimulate the growth of ice crystals while hiking Mount Washington. The mountain, located in New Hampshire, is often called the “stormiest mountain in the world” and it’s considered a prime spot for cold weather testing. After a series of experiments there and in New York, the two researchers managed to make it rain using silver iodide bullets. They got a patent for their technique, referred to as cloud-seeding, in 1948.

A few decades later, the US military brought cloud-seeding to the battlefield. Between 1967 and 1972, during the Vietnam War, it spent roughly $3 million each year on weather modification campaigns designed to draw out the monsoon season and create muddy, difficult conditions for enemy fighters. One campaign involved an attempt to flood the Ho Chi Minh Trail, the main route that enemy fighters were using to deliver their supplies.

Here’s a snippet of a document from the Federation of American Scientists (FAS) detailing the campaign:

The program was also known as Operation Popeye, Operation Intermediary, and Operation Compatriot. Whenever too many people would learn the name, the military would change it. Whether the program worked or not is still a matter of debate. According to the FAS, its “effects were minimal”.

Scientists say this is one of the biggest problems with cloud-seeding programs: it’s tough to tell if they have any effect at all. Even with today’s improved techniques, it can be difficult to distinguish the weather that may have already occurred from the weather that the seeding could have caused.

“The question is always, if you didn’t do that, would it have rained anyway?” Alan Robock, a distinguished professor of geophysics at the department of environmental science at Rutgers University, told Business Insider.

In 2010, the American Meteorological Society released a statement on cloud-seeding saying that although the science of weather modification has improved significantly in the past five decades, “there remain limits to the certainty with which desired changes in cloud behavior can be brought about using current cloud seeding techniques”. In other words, we need more research.

Despite ongoing disputes over how well it works, people across the globe are still using weather modification to try and address large-scale shifts in temperature and precipitation brought about by climate change.

In drought-stricken California and several states in the Midwest, cloud-seeding projects are being used in an attempt to increase water production, which is desperately needed both as drinking water and for irrigating crops. And although these projects “may not do so significantly… even a 10% increase in rainfall or snowfall may be worth the expense”, Bart Geerts, a professor of atmospheric science at the University of Wyoming, told Business Insider. 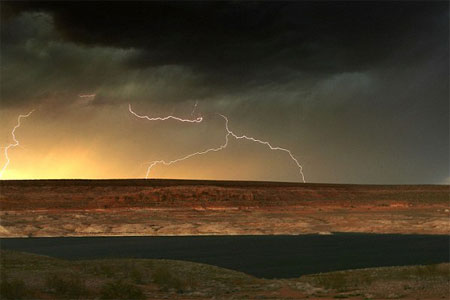 “We’re becoming more and more aware of the constraints that arid environments have on resources. Water is the biggest constraint in the western US and parts of China” Geerts said.

Across the globe, countries are seeing large numbers of such “extreme weather events” which can take the form of intense dry spells or severe storms and flooding. At the same time, there’s a slight resurgence in the use of weather modification techniques, which experts say countries may be using to try and protect vulnerable areas from the brunt of natural disasters.

China’s Ministry of Finance aims to use the technology to create more than 60 billion cubic meters of additional rain every year by 2020, Reuters recently reported. Last year, the drought-stricken Indian state of Maharashtra spent $4.5 million on cloud-seeding.

The current projects aren’t limited to prepping for natural disasters or climate change, of course. In May 2016, the Russian government allocated $1.3 million to a project designed to stop rain from falling on International Worker’s Day.

While some government-run projects exist, the most popular type of project involves coordination between the government and a private company. The largest such company, Weather Modification Incorporated, has operations worldwide and it claims prominently that its technology works.

“Weather Modification Inc. is on the forefront of scientific technology to maximize water availability worldwide”, it states on its website. “Application of scientific concepts and extensive scientific experimentation has proven that cloud seeding increases the amount of precipitation.”

One of their recent projects, a pilot program in Wyoming, was aimed at finding out if they could use cloud seeding to increase water supplies in the state. The National Science Foundation (NSF) also helped fund the project, although it hasn’t had an official weather modification program since the 1970s, when federal agencies essentially froze funding for cloud-seeding projects.

Geerts, who worked on that program through his university, says similar projects have been going on for decades. But “more recently, there’s been more interest, especially in the dry periods” said Geerts.

How cloud seeding is supposed to work

All air contains moisture. Even in hot, dry areas, some water remains suspended in the sky. Before it rains, water droplets in the air condense and cool on tiny particles (such as dust) in the atmosphere, forming clouds. Once they grow large and heavy enough, they fall, melting along the way. This is what we know as rain.

Cloud seeding operates on the same idea: by injecting chemicals into clouds to lower their temperature and give them more material on which to condense, it hopefully speeds up the process, causing it to rain sooner than it normally would. 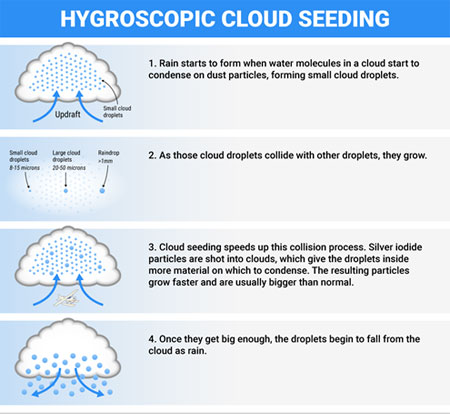 Experts agree that in theory, cloud-seeding makes sense. But in practice, “I think the verdict is still out” said Geerts.

Nevertheless, people are still striving to improve weather modification technology, hoping that one day it could help with everything from inducing rain to preventing hailstorms. In the meantime, researchers say we’re seeing the impacts of what some call “unintentional” weather modification across the globe with the release of fossil fuels into the atmosphere.

“Whatever we do locally, whether its industrial processes or burning biofuels, that has a global impact. And at the end of the day, some of that may be more significant than the intentional stuff that I’m involved with”, said Geerts.

Pokémon Go, the CIA, «Totalitarianism» and the Future of Surveillance