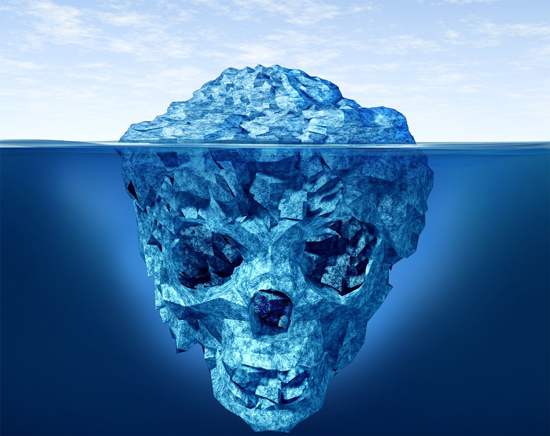 As a result of countless “conspiracy theories” being proven as facts in recent years, chief among which the Edwards Snowden revelations which exposed the NSA as nothing short of “Big Brother”, and the WikiLeaks disclosures which revealed how the Democratic Party colluded against Bernie Sanders to promote Clinton’s candidacy and countless more such examples, fully 8-in-10 people believe that the U.S. government currently monitors or spies on the activities of American citizens, including a majority (53%) who say this activity is widespread and another 29% who say such monitoring happens but is not widespread. Just 14% say this monitoring does not happen at all. Shockingly, there were no substantial partisan differences in these results.

What is even more surprising is that the poll found that 7 out of 10 Americans polled in each political group, not just Republicans, but Democrats and independents as well, believe the existence of a “deep state”.
31% of Republicans and 33% of independents say they believe a deep state “definitely exists”, while 19% of Democrats believe this.
“We usually expect opinions on the operation of government to shift depending on which party is in charge”, Monmouth University Polling Institute Director Patrick Murray said in a statement. “But there’s an ominous feeling by Democrats and Republicans alike that a ‘Deep State’ of unelected operatives are pulling the levers of power.”

While there is general partisan agreement on concerns about government overreach, there are some notable differences in the level of concern by two very different demographic metrics: race and membership in the National Rifle Association.
Americans of black, Latino and Asian backgrounds (35%) are more likely than non-Hispanic whites (23%) to say that the Deep State definitely exists. Non-whites (60%) are also somewhat more likely than whites (50%) to worry about the government monitoring them and similarly more likely to believe there is already widespread government monitoring of U.S. citizens (60% and 49%, respectively). More non-whites (35%) than whites (23%) say that such monitoring is rarely or never justified.

The Monmouth University Poll also found that NRA members (43%) are significantly more likely than other Americans (25%) to definitely believe in the existence of a Deep State operation in DC. In a Monmouth poll released in March, NRA members voiced opposition to the establishment of a national gun registry database in part because of their fear it would be used to track other activities of gun owners. NRA members (63%) are somewhat more likely than other Americans (51%) to worry about the government monitoring them and similarly are more likely to believe there is already widespread government monitoring of U.S. citizens (61% and 51%, respectively). However, there are no significant differences between NRA members (30%) and others (26%) on whether such monitoring is rarely or never justified when it does occur. The opinion of gun owners who are not NRA members are more similar to non-gun owners than they are to NRA members on these questions.

“Anxiety about a possible ‘Deep State’ is prevalent in both parties, but each has key constituent groups who express even greater concerns about the potential for government overreach. This includes racial and ethnic groups who still experience the effects of historical prejudice as well as gun owners who fear their constitutional rights are being threatened” said Murray. “Can those fears be allayed or will they intensify and spread? Or is this just the new normal? This is something we will have to keep tracking”. 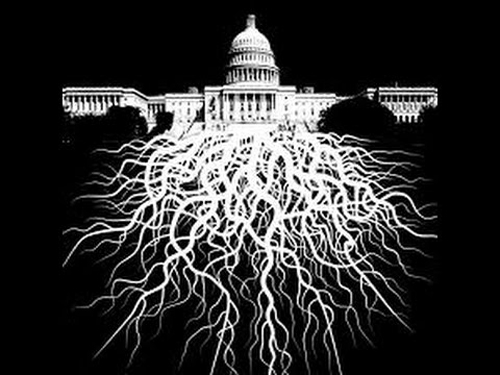 Ironically, the poll also found that a majority of those polled, 63%, said they were “not familiar” with the term “deep state”, however.
13% said they were “very familiar”, while 24% said they were “somewhat familiar”. In other words, someone else is running the country, just not those who are supposed to be.
“This is a worrisome finding. The strength of our government relies on public faith in protecting our freedoms, which is not particularly robust. And it’s not a Democratic or Republican issue. These concerns span the political spectrum”, said Murray.

What’s more, only a small fraction of the people who were polled believe that this widespread 1984-style police state is justified. According to the poll, only 18% of Americans are asleep enough to believe that Uncle Sam watching their every move is warranted – a heartening statistic indeed.
This brings us to the question of why so many Americans feel that they are being spied on and controlled by shadow government officials who operate in secret?
The answer is quite simple: because it’s true!

As the torrent of Podesta emails from WikiLeaks exposed the crimes of the Clinton dynasty in 2016, the FBI followed up by releasing their own documents that were just as damning. Buried inside 100 pages of heavily redacted interview summaries from the FBI’s investigation into Clinton, Americans were exposed to a series of allegations that were nothing short of bombshell – documenting an ultra-secret, high-level group within the government, who were actually referred to as “The Shadow Government”.

This Shadow Government has long been kept in the dark realms of conspiracy theory. However, thanks to the efforts of WikiLeaks and the push by Americans for more transparency, the truth has now become stranger and even more corrupt than fiction.

With every action recorded, phone tapped, innocent family surveilled, right stripped, and citizen killed by their government, the term “Freedom” has become a mere symbolic representation of the brittle shell of America left behind after being gutted by unelected operatives in the deep state hell bent on total control and perpetual war.

The idea of a secret and unelected government forcing change without the public’s consent behind the scenes should shock the conscience.