Philippines president Rodrigo Duterte has issued a scathing attack at the Vatican, in the end of December 2016, calling them purveyors of pedophilia on a global scale.

After the Vatican staged a photographic exhibition to commemorate victims of the drug war in the Philippines, president Duterte decided to publicly lash out: “You say Duterte killer. You priests, you blame me for the deaths of thousands of drug addicts, even those who died in hospitals, you still blame me. But you are the ones who killed Christ.”

The president also said that the Vatican hasn’t helped in any way to end the drug war: “[They don’t do] anything against illegal drugs. They never bothered to help. The Church is not giving anything even if they collect so much. My statement is full of sarcasm because they [the priests] have been criticizing me. They are hypocrites.” 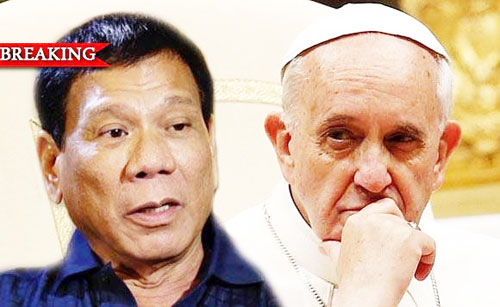 Duterte also said that he believes in God and Allah, but does not believe in organized religion and that the Vatican’s religion is about gold hoarding, as well as putting the fear of hell into its followers: “Do not believe it. That is what that religion is all about, they are instilling fear that you will go to hell if you are a sinner. But you will only know if there is indeed a hell if you die… Be careful about religion, it is about gold. It is about gold. They have not done anything. Where is their God and their grace? There is the hypocrisy of it all.”

Duterte then continued: “Catholicism is a sordid religion. It is about time to show you its history. Pope Leo was sired and even had sex with his child.”

While the pedophilia statement could be argued, what can’t be argued is that fact that the Vatican has paid out over $4 billion dollars to victims of sexual abuse by priests and clergy of the Vatican, according to the National Catholic Reporter. In other words, while it might be difficult to prove today that Pope Leo was a pedophile, it is well known that the Vatican itself has had a major and sinister problem with pedophilia and sexual abuse.

In May 2016, president Duterte was set to visit the Vatican to apologize to Pope Francis for previously insulting him, but ultimately decided against the trip.

He also called Zeid Ra’ad Al Hussein, a United Nations official, an “idiot”. “This guy [Zeid] is either the joker or crazy. You UN officials, sitting there on your a**es, we pay you your salaries. You idiot, do not tell me what to do… Who gave you the right? Please shut up because your brain is lacking there. Go back to school. You United Nations, you do not know diplomacy. You do not know how to behave to be an employee of the United Nations.”

While Duterte has been speaking his mind for a while now and publicly distancing himself from the US and aligning with Russia and China, the call out of the Vatican for gold hoarding, incest and pedophilia takes it to the highest level.