Putin Warns That Attacking Russia Will Mean Catastrophe For Mankind 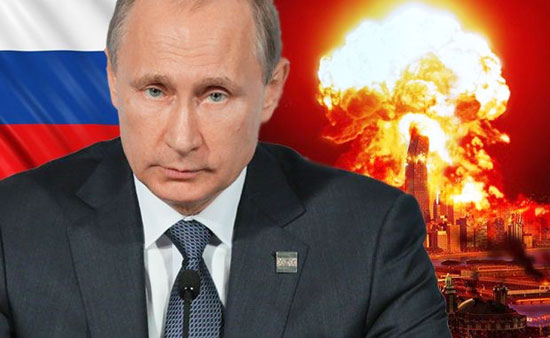 Russian President Vladimir Putin has warned that any attempts to destroy Russia would spark a response from Moscow that would spell “catastrophe for mankind”.

During an interview with Russian state TV on March 7, Putin said his country would retaliate to any attacks against its sovereignty, in kind. He made it clear that in his opinion, if his country was under attack and faced being wiped out, then the world would not be worth living in.

He said: “If someone makes a decision to destroy Russia, then we have a legitimate right to respond; yes, it will mean a global catastrophe for mankind, for the entire world. But as a citizen of Russia and the head of the Russian state I would ask: What is such a world for, if there were no Russia?”.

Press TV reports that the Russian leader made clear that Russia would never use nuclear weapons against other countries unless it becomes under attack by such weapons.
“The decision to use nuclear weapons can only be made if our early warning system not only detects a missile launch but clearly forecasts its flight path and the time when warheads reach the Russian territory” said Putin.

He said then that the new weapons were developed as a response to Washington’s violation of the 1972 Anti-Ballistic Missile Treaty, which was signed between the US and the Soviet Union to limit the use of missile defense systems. Putin said Washington unilaterally withdrew from the agreement under former President George W. Bush to advance its missile technology, but Moscow has made sure that its strategic weapons can get past any modern US system.

Putin praises Trump, says US is “devouring itself”

Elsewhere in his remarks, Putin praised US President Donald Trump as a “balanced” leader but expressed disappointment with the American political system. The Russian head of state said his US counterpart made a “good impression” on him during their various meetings on the sidelines of international summits last year.

“It’s possible to negotiate with him, to search for compromises” Putin said, noting that he had no “disappointment” with the American president.
Putin then proceeded to voice frustration with the political system in the US, which he said “has demonstrated its inefficiency and has been eating itself up”.
“It’s quite difficult to interact with such a system, because it’s unpredictable”, the Russian president argued.

Asked about the bitter tensions in ties between Russia and the West, Putin accused Western powers of orchestrating plots to contain and weaken Russia.
“We are a great power, and no one likes competition”, he said.

The US and its Western allies have long been at loggerheads with Russia over a range of issues, using economic and political means to contain Moscow’s influence in the Middle East, as well as Eastern Europe.