Revisiting the Vietnam era: are Soros and the Deep State updating an old Psyop to depose Trump? (1) 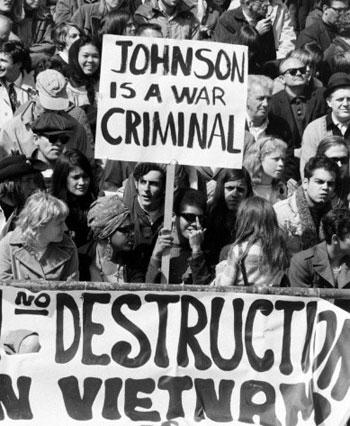 I have wanted to write a post called something like “Is Trump the Real Deal?” That is a controversy in alternative media: some are faithful Trump advocates; others take the view that in the jaded world of realpolitik, no true outsider can win, that the Trump-Clinton rivalry was only for show, and that the Powers That Be wanted Trump to win anyway.

I do believe, categorically, that Hillary Clinton was the Deep State’s first choice. This was demonstrated by mainstream media’s ruthless daily pummeling of Trump, while kid-gloving Clinton despite her innumerable scandals; the rigging of debates, and even trotting out George H. W. Bush to announce he would vote for Hillary.

The election was followed by unprecedented efforts to overturn it, including street riots, recounts, death threats to electors, and the unsupported “Russian hacking” claim.

But though the establishment favored Clinton, is Trump a true populist outsider?

On the negative side, after pledging to “drain the swamp,” Trump has appointed a number of swamp creatures, including neocons, establishment Republicans, and Goldman Sachs bankers; there are those who feel he is moving too slowly on his promises, some of which – such as investigating Hillary – look abandoned. Most concerning to me is Trump’s long history of Zionist connections, now crystallizing in his administration.

On the “real” side, he has axed the TPP, is keeping his pledge to halt illegal immigration, is moving to repeal Obamacare, wants to work with Putin, has spoken to Robert F. Kennedy about leading a vaccine task force, and has reversed Obama’s insane transgender policies.

Although it is reasonable to say “the jury is still out” on Trump, I’m going to focus on two things that are definite: (1) mainstream media’s continuing relentless attacks on him; and (2) the orchestrated nationwide protests.

During the 2016 campaign, a study by the Media Research Center found 91 percent of broadcast media coverage was hostile to Trump. There has been no let-up since the election. Any mistake the President makes in his remarks, however trivial, is inflated and often distorted, whereas by contrast, the media chronically overlooked Obama’s many gaffes.

On February 17, 2017, the New York Times published an op-ed entitled “Is It Time to Call Trump Mentally Ill?” On February 18, it published one called “How Can We Get Rid of Trump?” With efforts to overturn the election having flopped, the plan has switched to impeachment.

The barrage of anti-Trump headlines feeds the rage of “not my President” protesters, who also feed on cash from the likes of billionaire George Soros, America’s financial angel of civil disorder. He helped fund the Ferguson riots, the post-election November riots, the January Women’s March, and the violent February Berkeley protests.

As a one-time hippie, it appears to me that Soros is using the playbook from the Vietnam War era. This necessitates digressing to that period, after which we’ll return to Trump.

Lest there be any misunderstanding, I am ANTI-WAR. A war, like a gun, should only be used as an absolute last resort. The “Arab Spring” wars inflicted on the Middle East over the past seventeen years, which were already planned in 2001, are abominations. But as we’ll see, the Vietnam War was undertaken for complex purposes, and was in several ways unlike America’s other conflicts.

As is still widely unknown, the hippie/antiwar movement of the sixties, like today’s Soros rioters, was billionaire-funded, in this case by the Rockefellers.

In The Strawberry Statement: Notes of a College Revolutionary, student radical James Kunen described the 1968 annual meeting of Students for a Democratic Society (SDS), which spearheaded the war protests:

“Also at the convention, men from Business International Round Tables – the meetings sponsored by Business International – tried to buy up a few radicals. These men are the world’s leading industrialists and they convene to decide how our lives are going to go. They are the left wing of the ruling class. They offered to finance our demonstrations in Chicago. We were also offered Esso (Rockefeller) money. They want us to make a lot of radical commotion so they can look more in the center as they move to the left.”

Jerry Kirk, one-time member of SDS and the Communist Party, testified before the House and Senate Internal Security Panels:

“Young people have no conception of the conspiracy strategy of pressure from above and pressure from below. They have no idea that they are playing into the hands of the establishment they claim to hate. The radicals think they are fighting the forces of the super rich, like Rockefeller and Ford, and they don’t realize that it is precisely such forces which are behind their own revolution, financing it, and using it for their own purposes.”

In 1970, I hawked the Phoenix (Boston’s new left-wing counterculture newspaper) on the streets (they gave hawkers a really good deal). Eventually, after the Phoenix went too commercial, some of its former staff started a spin-off called The Real Paper. (The idea was that this paper would give you the real hippie news.) But who was owner and publisher of The Real Paper? David Rockefeller, Jr. His name was right on the masthead. To resolve this “cognitive dissonance,” I think most of us assumed David Jr. was “rebelling” against his capitalist father.

Vito Paulekas was considered one of the prime founders of the hippie movement (Wikipedia even credits him with coining the phrase “freak out”). Ironically, Vito’s uncle was the father-in-law of Winthrop Rockefeller (David Sr.’s brother).

Clearly, the Rockefellers were not adverse to the hippie movement, but embraced it.
Timothy Leary (“Turn on, tune in, drop out”), the guru of LSD and the counterculture, is suspected of working for the CIA, and eventually credited the CIA with directing the whole movement.

Just as stunning are the close links between the hippie music scene and Deep State (especially the military and intelligence communities), detailed by David McGowan in his landmark book Weird Scenes inside the Canyon. Many of the famed rock bands resided in the Laurel Canyon neighborhood of Los Angeles, a short distance from each other, and from the Lookout Mountain Laboratory, a top-secret military installation.

Jim Morrison of the Doors (whose songs I often listened to in the day) was the son of Admiral George Morrison, the commander of U.S. naval forces in the Tonkin Gulf at the time of the notorious 1964 “incident” used to launch the disastrous war.
Like many sixties Laurel Canyon bands, the Doors were created suddenly. Morrison had no previous music or singing experience; none of the Doors had even been in a band before. Yet unlike most musicians, who must undergo years of development and struggle before success, the Doors swiftly had an array of hit songs and a recording contract. Their producer, Paul Rothschild, had served in the Army Intelligence Corps. Morrison’s career ended as abruptly as it began, when he died under controversial circumstances in 1971.

The defining hit of the hippie generation was probably “San Francisco,” composed by John Phillips (The Mommas & the Poppas) for his friend Scott McKenzie.


Yet like so many of the Laurel Canyon crowd, Phillips had a military background. The son of a Marine Corps captain; his sister Rosie worked at the Pentagon, as did his first wife Susie and John himself attended elite military prep schools before going to Annapolis, from which he dropped out.

The number-one protest song of that era may have been “For What It’s Worth” by Buffalo Springfield, who morphed into Crosby, Stills, Nash and Young:.

According to rock lore, Stephen Stills and Neil Young first met on the Sunset Strip in April 1966, and formed their band. Like the Doors, they had meteoric success; within three months, they were opening for the Rolling Stones at the Hollywood Bowl and released their first single. McGowan notes that Stills was “educated primarily at schools on military bases and at elite military academies,” while Crosby was the son of a major in U.S. military intelligence.