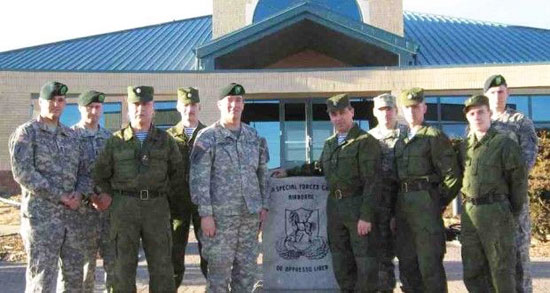 Russian and American troops at Fort Carson, May 2012.

In 2018, the two countries better form a strong alliance because they will be attacked by the globalists through proxy, the United Nations, under the Kigali Principles that UN can militarily enter any country that they deem to under “duress”.

The following paragraphs contain items which seem to praise Putin and put him up on a pedestal. That it is not the intent of this article. Putin, if he thought he could get away with it, would not hesitate to conquer America. However, because of two factors, Putin cannot hold his country together under the banner of extreme isolationism. America’s secret military space based program keeps Putin in check because Putin does not have the ability to thwart the American military threat from above. Putin lives in fear of a Muslim immigration invasion similar to what has destroyed Europe. This makes Putin and Trump willing partners, out of necessity, to oppose radical Islamic forces. Trump faces a similar challenge to America’s national security.

Putin has significant issues with the central banks. Trump has significant issues with the central banks. The New World Order crowd (i.e. Bank of International Settlements and the Rothschilds) cannot move their plans of world domination through a one-world-government and a unified and controlled socialist economy any further as long as Trump and his populism and Putin and his nationalism exist in the world. Both countries and their respective governments must be destroyed for the globalists to impose their will on humanity.

The Goal of the New World Order

The ultimate goal of the New World Order is to set up Satan’s Kingdom on Earth. To accomplish this goal, certain things must happen. First, all notion of notions of Christian-based free will must be eliminated. People belong to the state, they live to serve the state. Marx understood this mentality when he called organized religion the opiate of the masses.

As a subset of the goals to achieve Satanic rule over the planet, the size of humanity must be significantly reduced in order to reduce the volume of resistance that will occur when humanity wakes up to the fact that for all intents and purposes, humanity will be on the road to be exterminated. The globalists repeatedly call for a radical reduction in global population of at least 90%. This will be accompanied by what we typically call transhumanism. The Satanic global elite will continue to morph man away from God’s creation to a perversion of humanity and this will be rewarded by accompanying life extension technology. Only the elite will enjoy the fruits of their Satanic labor. The surviving remnants of humanity will be enslaved after suffering through the purge of mass depopulation.

I now understand why Putin became a Christian and Trump has become a “baby” (new) Christian. Both men are exhibiting proof of possessing the knowledge that I am exposing here.

The globalist plan to takeover the planet and then radically change it was well underway. Eight years of Obama set the table for the closer, Hillary Clinton. It was apparent from her campaign, that she had one mission: start the war of globalist unification which would be fought by Russia and America. The election of Trump and the rise of Russian nationalism put a crimp in the globalist plans.

Putin came to power in late 1999, Russia was mired in corruption and in fighting among the oligarchs. Russia’s political system was controlled by organized crime, the Russian mafia, and anyone who wanted to get anything done had to work through the Russian mafia, which was ex-KGB. In fact, Russia was in such bad shape politically and economically, even the Rothschild central banks wouldn’t touch Russia. The fact that the Russians were ignored by the Rothschild banking interests was a blessing in disguise. This left a vacuum that allowed Putin to ride in on his white horse.

Over the next few years, Putin took on the powerful oligarchs, corrupt politicians and the elites who formed the fifth column. With authoritarian KGB-style, he assassinated some pro-Western journalists, jailed opponents and consolidated his power. Putin was helped by raising oil prices, but he used the new wealth wisely. He grew the Russian economy, built up gold and foreign reserves, and significantly reduced the national debt.

No Rothschild Controlled Central Bank Is a Blessing

Because Putin did not have to operate out of a debt-driven economy, he was free to build the Russian economy. Between 1999 and 2015, the Russian economy grew by 1,000% and Russia climbed back into a world leadership position from an economic point of view. Also, Russia debt-to GDP dropped from 100% to 17%. As a contrast, China’s ratio has increased from 300 to 1 (source: economist Bob Kudla) and this is something that is not being reported in the mainstream media.

What really turned around the Russia economy is due to the fact that Russia became the 6th largest holder of gold. And given the fact that Russia, despite spending large sums of money on its military, is quickly becoming the soundest economy on the planet. Unlike the United States where record corporate profits has not trickle down to the masses, Russia has the fastest growing middle class on the planet. Since Putin has come to power, no other nation can match Russia’s growing GDP.

Americans Would Die for Putin’s Reforms

Like all top politicians, Putin has learned to control his image, and he did that through the creation of RT, something that Trump has also considered doing. I have postulated that Putin was indeed a Christian. This belief is bolstered by his social and political reforms. The Russians have built more than 16,000 Christian churches. The tax system in Russia favors having children and there is no marriage penalty tax as there is in the United States.

Putin has had the Christian backbone to ban LGBT propaganda that demand special treatment instead of the same protections under the law as everyone else. George Soros is banned from setting foot in Russia.

On the terrorist front, Putin’s military is attempting to exterminate the CIA/Clinton created ISIS instead of using them as a political tool.
Putin has moved to protect the health and welfare of his people by banning cancer-causing Monsanto based GMOs.
Remarkably, Putin has withstood the pressures of the Rothschild, Satanic forces of international banking which has seemingly crushed each and every other nation and leader that opposes them.

Russia has a merit based immigration system. One has to demonstrate some definitive reason on how their skills will benefit Russia before being admitted.

Putin has an 85% approval rating. When have we ever seen that in the US?

CNN Calls Trump a Traitor for Meeting With Putin: Are They Correct?

Was it an act of treason for Trump to meet with Putin in Helsinki? The answer depends on who one serves in life. If one is a Christian, the answer is no. Any meeting such as the one held in Helsinki has the potential to save billions of lives from a world war, the war that will impose the will of the transhumanists upon society.

Why do you think we are listening to the fiction of 97 genders exist in the world? Why do you think we are being forced to accept the normalization of pedophilia and transgenders using restrooms that little girls go into? For globalism to advance, traditional values must be destroyed. Why are basic Christian-based values under attack? Because this a globalist movement designed to eradicate Christianity and enslave the surviving remnants of humanity.

On the other hand, if one is a Christian, then one is vehemently opposed to this undergoing takeover of the planet. Therefore, one would welcome the cooperation between two men who are opposed to the New World Order in its radical form. By meeting, Trump and Putin could be delaying the globalist takeover of the planet that will precede the return of Christ. However, even if humanity is to be brought to the brink of defeat, we have the duty to oppose this Satanic agenda with all might that we can muster. Trump and Putin are demonstrating the resolve to oppose this flavor of Satanism. 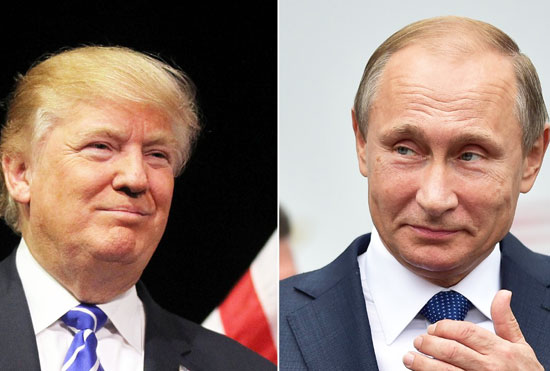 Why can’t Americans have a leader like Putin? In fact, America does, his name is Donald J. Trump. Trump is not the picture of perfection, but he is all Americans got. Unlike Trump, Putin has mastered his Deep State when he negated the Russian mafia and the oligarchs. Trump needs people’s help if he is going to accomplish the same. Most of all, he needs their prayers. Further, he needs people like you and me to get off of our backsides and politically get to work as we spread the word of God to all elements in our society.

Trump does favor Russia and for good reason, but he is not a traitor. What Putin has accomplished for Russia, Trump wants the same for his people, but he is opposed by the abject evil of the Deep State.

I want what the Russian people have: a responsive government that gives a damn about its people. History has handed Trump this opportunity.
Russia does not have to be America’s enemy as long as Putin in charge. However, US cannot remain what it is said to be, a great country, as long as the Deep State is in charge. Does it make sense now why a fourth degree coven witch was chosen by the globalists to become the US 45th President?

For humanity to survive, Russia and the United States must unite against globalism and all that they stand for.