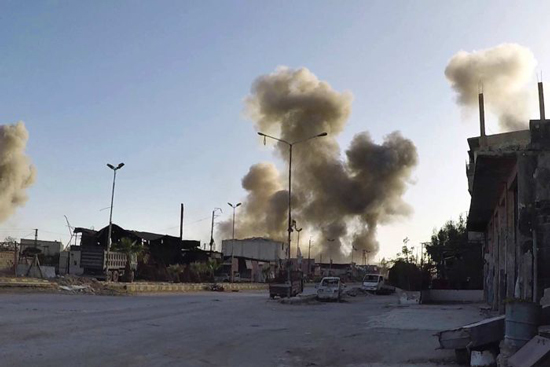 Moscow has “irrefutable” data that proves the chemical attack in Syria’s Douma was staged by Western intelligence services seeking to push a “Russophobic campaign”.
“We have irrefutable evidence that it was another staging, and the special services of a state which is in the forefront of the Russophobic campaign had a hand in the staging”, Russian Foreign Minister Sergei Lavrov told reporters, alongside his Dutch counterpart Stef Blok, on April 13.

During their meeting in Moscow, both diplomats touched upon Syria, which has recently been attacked with new military strikes in the wake of an alleged chemical attack. Some Western leaders, including from the US and France, claim that the Syrian government is behind the alleged incident. It comes despite a team from the Organization for Prohibition of Chemical Weapons (OPCW), tasked with establishing the truth, only just arriving in the country at the time of the world leaders’ belligerent declarations.

Russia’s top diplomat warned against following the Libyan and Iraqi scenarios amid the intensifying bellicose rhetoric.
“God forbid something adventurous will be undertaken in Syria similar to the Libyan or Iraqi experience… I hope nobody dares to”, Lavrov told reporters at that time.
Otherwise, a new wave of refugees will surge into Europe and in other directions, the foreign minister warned. However, this scenario does not bother those “who are protected by an ocean” and can rip apart the region for the sake of geopolitical interests, he said.

The situation regarding Syria has escalated following reports on the alleged chemical attack in the town of Douma. Pro-militant sources, and the controversial White Helmets group in particular, claimed that the Syrian government used chlorine-filled munitions to strike the area, killing and injuring dozens of civilians. Moscow and Damascus have repeatedly dismissed the allegations. After inspecting the site of the alleged incident, Russian military specialists said there were no signs of chemical weapon use.

How To Calm Your Mind Without Sitting to Meditate