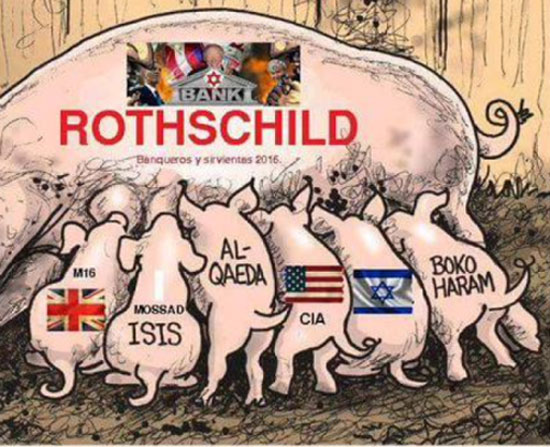 Russia’s TV networks are educating people about the Rothschilds and the threat of their excessive global power. Russian president Vladimir Putin is said to be “readying” his people to stand up to the New World Order as the country prepares to separate from the world banking system.TV shows aim to educate citizens on the history of the Rothschild-controlled IMF and why globalism is a threat to the nation.

It’s a stark contrast to the West where the mainstream media is constantly shoveling propaganda down the throats of the public. No wonder the Western MSM is so keen to demonize Russia.

Zero Hedge reports that Putin is readying his people to “divorce” from the international banking system altogether, and start over with a nationalistic platform, backed by thousands of tons of gold, and growing alliances with Europe, China and the BRICS nations, the Middle East and several emerging powers. A major attempt to bring Russia under heel could result in the greatest schism the global system of finance has ever seen. Then what? According to Russia Insider, Russia has successfully developed and implemented an alternative, should it be excluded from international banking systems, according to a recent report. As far as western sanctions go, by far Russia’s largest vulnerability is in its banking sector, which for better or for worse is tied to the hip with international banking.

If Russia wishes to maintain the status quo, there’s not much that can be done about this dependency. But shortly after sanctions were announced in 2014, Moscow set out to prepare for the worst-case scenario: being cut off from the Worldwide Interbank Financial Telecommunication (SWIFT) system. In layman’s terms, SWIFT allows for fast and (allegedly) secure international financial transfers. In fifty years when you are able to use your Bank of America debit card on the Moon (for a low fee of 2,000 moon rubles), it will be because of SWIFT or a system similar to it. There are two issues surrounding SWIFT “cut-off” for Russia:
1. Is it likely to happen? and
2. Is Russia prepared for it?

Cutting Russia from SWIFT would be a disaster. According to Ewald Nowotny, president of the National Bank of Austria and member of the European Central Bank’s governing council, such a move “we would see as very problematic because it could perhaps undermine confidence in this system”. Of course, this hasn’t stopped Europe and Washington from threatening to pull the SWIFT plug.

Is There a Relation Between Good Faith and Good Health?