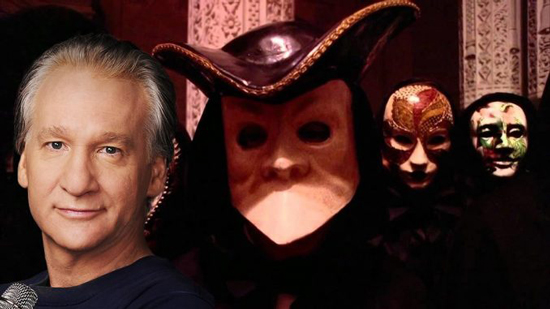 A dark and disturbing Hollywood sex cult has been exposed, where rich and powerful members sign with their blood and sell their souls to an unknown entity – in return for access to much younger sex slaves at monthly Eyes Wide Shut style events.

The skull and crossbones style secret society – exposed by a brave investigative reporter who infiltrated a recent party disguised in a mask and Agent Provocateur lingerie – is believed to keep its A-list members in line by secretly filming the extreme acts that take place and blackmailing them at a later date.
The reporter described entering the secret party and seeing “Bill Maher in a sea of beautiful young women”. She immediately approached him.
“Are you a Leo?” she asked the host of HBO’s Real Time, while eyeing a lion pendant around his neck.
“No, they make me wear this stupid thing because I’m a member” he replied, stroking the back of his date, a pretty younger woman in a short black leather dress.

NY Post reports:
“Around us, a mostly female crowd of models, young professionals, actresses and assistants strut about in couture lingerie, much to the delight of older male guests in tuxedos. One 20-something blonde crawls on the carpeted floor wearing red lace and a face mask with a leather pig snout and ears.
Other pretty young things wear metallic pasties and black badges that read ‘Eat me’ or ‘Touch me’ on their décolletage, while holding silver platters of bite-size brownies and parfaits. A man who calls himself the ‘Bunnyman’ and wears a black leather mask and rabbit ears demonstrates various Japanese bondage techniques on an aroused woman sitting upright in a plush, gold-painted chair.

The Elite Aren’t Even Trying To Hide It Anymore 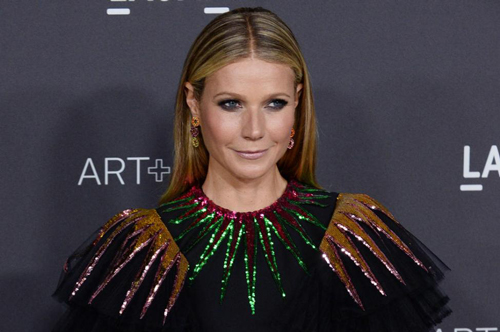 Dominus members sign a ‘blood oath’ involving blood and a paper document, to join – but Lawner won’t go into details.
‘That’s all I can tell you’ he says. ‘It’s an initiation into the society.’
Cellphones are prohibited and must be checked at the door. All parties have a masquerade theme, and while masks are required for entry, many take them off inside. Men wear tuxes, women wear sexy lingerie or cocktail dresses.
As exclusive as the parties are, the vibe is friendly and there’s no Hollywood pretense. Attendees are open and eager to talk, flirt – and much more – with each other.

In September 2017, Snctm held a top-secret party in New York during Fashion Week. Attendees picked up brass keys with the soiree’s address engraved on them at the high-end lingerie company’s stores in Soho and on Madison Avenue.
Lawner is working to take Snctm beyond Beverly Hills. He planed to host a party on a yacht at this year’s Cannes Film Festival and do two events in New York in September for Fashion Week.

He also says he’s in talks with Showtime to do an eight-part documentary, and with Fox to do a scripted show on his life with ‘Glee’ producer Brad Falchuk. Falchuk is dating Gwyneth Paltrow, whose website Goop has positively covered Snctm. Lawner says Falchuk and Paltrow have come to parties together.
‘[Gwyneth is] not a crazy-kinky person, like people think’ he says. ‘She’s a down-to-Earth total sweetheart… They are exploratory with each other.’
(At press time, reps for Fox and Showtime could not confirm that these projects were in development. Reps for Maher, Paltrow and Falchuck did not respond.)”

Raging Against Self Defense: Psychiatrist Examines the Anti-Gun Mentality (2)