Satanists are responsible for chaos in the Middle East

Warmongers and Satanists have screwed up just about anything they touch in the Middle East. 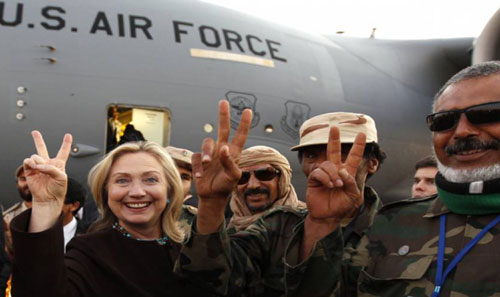 Russian Foreign Minister Sergey Lavrov has recently taken a political chainsaw and started to cut warmongers who created chaos in the Middle East to pieces. He unapologetically declared:
“Libya was bombed and its government was violently overthrown. It was turned into a backyard for terrorists and criminals. The regime was changed with the help of those [militants], who came from Europe.
They were free to leave their countries because everybody knew where they were going and what they were going to do there. And then they were welcomed back. Now, we just see the consequences of these irresponsible policies.”

Warmongers in the West — obviously the Neoconservatives in England and America — must bear some responsibility for the chaos in the Middle East, said Lavrov. In fact, warmongers have screwed up just about anything they touch in the Middle East. Listen to retired career officer in the Armor Branch of the United States Army and academic Andrew J. Bacevich:

“Apart from a handful of deluded neoconservatives, no one believes that the United States accomplished its objectives in Iraq, unless the main objective was to commit mayhem, apply a tourniquet to staunch the bleeding, and then declare the patient stable while hastily leaving the scene of the crime…

The fighting in Afghanistan and Iraq has exacted a huge price from the U.S. military — especially the army and the Marines. More than 6,700 soldiers have been killed so far in those two conflicts, and over fifty thousand have been wounded in action, about 22 percent with traumatic brain injuries.

Furthermore, as always happens in war, many of the combatants are psychological casualties, as they return home with post-traumatic stress disorder (PTSD) or depression.The Department of Veterans Affairs reported in the fall of 2012 that more than 247,000 veterans of the Afghanistan and Iraq wars have been diagnosed with PTSD. Many of those soldiers have served multiple combat tours.

It is hardly surprising that the suicide rate in the U.S. military increased by 80 percent from 2002 to 2009, while the civilian rate increased only 15 percent. And in 2009, veterans of Iraq were twice as likely to be unemployed as the typical American.

On top of all that, returning war veterans are roughly four times more likely to face family-related problems like divorce, domestic violence and child abuse than those who stayed out of harm’s way. In 2011, the year the Iraq War ended, one out of every five active duty soldiers was on antidepressants, sedatives, or other prescription drugs. The incidence of spousal abuse spiked, as did the divorce rate among military couples. Debilitating combat stress reached epidemic proportions. So did brain injuries. Soldier suicides skyrocketed.”

If you think that Bacevich is woefully mistaken, then consider this. From 2003 to 2012, over two thousand doctors and nurses, and over four hundred academics, have been assassinated in Iraq. Others have emigrated due to violence in the region. In 1990, there were about thirty thousand registered doctors in Iraq. By 2008, more than fifteen thousand doctors had already left the country. Then there is the high unemployment that had been ravaging sections of the region, combining with the fact that educational institutions have been in decline.

This is the freedom that Satanists have brought to Iraq; this is the sort of heaven these intellectual and political geniuses are seeking in the Middle East and elsewhere. And the ideological agenda of the Neoconservative movement progressively attacks Christian families and neighborhoods in the Middle East.

Doug Bandow had the guts in 2010 to declare that “the historic Christian community has been largely destroyed” in Iraq after the war, where hundreds of Christians have been killed and exiled to other countries such as Syria and Lebanon.

We are witnessing the same thing in Syria, where the Christian minority has been targeted by the socalled Syrian rebels. And by October 2012, it was clear that by supporting the rebels, the U.S. ended up supporting “hardline Islamic Jihadis,” says David Sanger of the New York Times. The rebels themselves have been known to support “senseless destruction, criminal behavior and the cold-blooded killing of prisoners.”

By the end of November 2012, the Syrian war had caused at least 40,000 people to leave their homeland, and “1.2 million have been driven from their homes within the country, according to the United Nations refugee agency. Some 2.5 million people need humanitarian assistance, and the number keeps climbing.”

That particular month turned out to be a bad omen for the Syrians as well, as they faced “the onslaught of winter with inadequate shelter,” with many possessing “little more than a T-shirt and flip-flops.” With the temperature reaching zero degrees at night, 27-year old Mohamed Khair al-Oraiby lamented, “We already wake up early because it is so cold.” Bandow continues to say that “many advocates claim Iraq is now a great success. But not for Iraq’s Christians.”

According to the reasoning by the New York Times, al-Assad was just dumb, killing his own allies for no reason. But only a week before the bombing, the Syrian rebels threatened to attack Beirut.

None of that was put into consideration by the New York Times. Why? Well, the New York Times, like other Zionist outlets such as the Washington Post, wanted Assad gone. They wanted regime change, but Russia didn’t allow that to happen. This is again one reason why warmongers and Satanists have used the Zionist media to demonize Russia and Vladimir Putin.

Putin has implicitly defined the premise that he is working with. He is working with the idea that perpetuating political Satanism in the Middle East and elsewhere is counterproductive. But do warmongers and Satanists want to listen?
Of course not. They are Satanists. And Satanists, by definition, are against Logos in all its manifestation. Satanists hate practical reason; they hate the moral and political order. They want chaos, total destruction, and misery. Lavrov is basically saying that this is evil and must be challenged.