Washington has never made any effort to conceal its contempt for North Korea. In the 64 years since the war ended, the US has done everything in its power to punish, humiliate and inflict pain on the Communist country. Washington has subjected the Democratic People’s Republic of Korea (North Korea) to starvation, prevented its government from accessing foreign capital and markets, strangled its economy with crippling economic sanctions, and installed lethal missile systems and military bases on their doorstep. 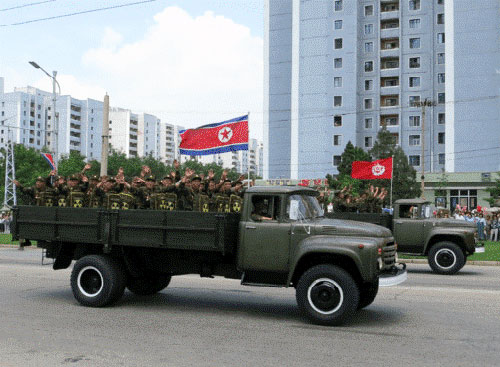 Negotiations aren’t possible because Washington refuses to sit down with a country which it sees as its inferior. Instead, the US has strong-armed China to do its bidding by using their diplomats as interlocutors who are expected to convey Washington’s ultimatums as threateningly as possible. The hope, of course, is that Pyongyang will cave in to Uncle Sam’s bullying and do what they are told.

But the North has never succumbed to US intimidation and there’s no sign that it will. Instead, they have developed a small arsenal of nuclear weapons to defend themselves in the event that the US tries to assert its dominance by launching another war.

There’s no country in the world that needs nuclear weapons more than North Korea. Brainwashed Americans, who get their news from FOX or CNN, may differ on this point, but if a hostile nation deployed carrier strike-groups off the coast of California while conducting massive war games on the Mexican border (with the express intention of massively scaring people) then they might see things differently. They might see the value of having a few nuclear weapons to deter that hostile nation from doing something really stupid.

And let’s be honest, the only reason Kim Jong Un hasn’t joined Saddam and Gadhafi in the great hereafter, is because (a) North Korea does not sit on an ocean of oil, and (b) North Korea has the capacity to reduce Seoul, Okinawa and Tokyo into smouldering debris-fields. Absent Kim’s weapons of mass destruction, Pyongyang would have faced a pre-emptive attack long ago and Kim would have faced a fate similar to Gadhafi’s. Nuclear weapons are the only known antidote to US adventurism. 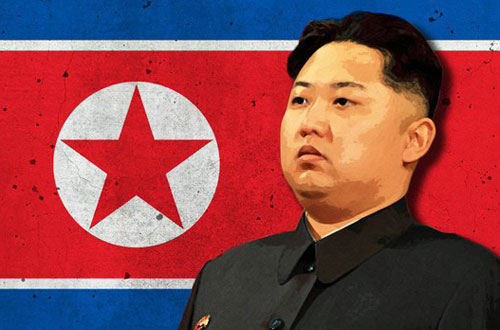 The American people – whose grasp of history does not extend beyond the events of 9/11 – have no idea of the way the US fights its wars or the horrific carnage and destruction it unleashed on the North Korea. Here’s a short refresher that helps clarify why North Korea is still wary of the US more than 60 years after the armistice was signed. The excerpt is from an article titled Americans have forgotten what we did to North Korea, at Vox World:
“In the early 1950s, during the Korean War, the US dropped more bombs on North Korea than it had dropped in the entire Pacific theatre during World War II.
This carpet bombing, which included 32,000 tons of napalm, often deliberately targeted civilian as well as military targets, devastating the country far beyond what was necessary to fight the war. Whole cities were destroyed, with many thousands of innocent civilians killed and many more left homeless and hungry.”

According to US journalist Blaine Harden, “Over a period of three years or so, we killed off 20 percent of the population”, Air Force Gen. Curtis LeMay, head of the Strategic Air Command during the Korean War, told the Office of Air Force History in 1984. Dean Rusk, a supporter of the war and later secretary of state, said the United States bombed “everything that moved in North Korea, every brick standing on top of another.” After running low on urban targets, U.S. bombers destroyed hydroelectric and irrigation dams in the later stages of the war, flooding farmland and destroying crops.

“On January 3 at 10:30 AM an armada of 82 flying fortresses loosed their death-dealing load on the city of Pyongyang. Hundreds of tons of bombs and incendiary compound were simultaneously dropped throughout the city, causing annihilating fires, the transatlantic barbarians bombed the city with delayed-action high-explosive bombs which exploded at intervals for a whole day making it impossible for the people to come out onto the streets. The entire city has now been burning, enveloped in flames, for two days. By the second day, 7,812 civilians’ houses had been burnt down. The Americans were well aware that there were no military targets left in Pyongyang.

The number of inhabitants of Pyongyang killed by bomb splinters, burnt alive and suffocated by smoke is incalculable… Some 50,000 inhabitants remain in the city which before the war had a population of 500,000.” (Americans have forgotten what we did to North Korea, in Vox World)

The United States killed over 2 million people in a country that posed no threat to US national security. Like Vietnam, the Korean War was just another muscle-flexing exercise the US periodically engages in whenever it gets bored or needs some far-flung location to try out its new weapons systems. The US had nothing to gain in its aggression on the Korean peninsula, it was mix of imperial overreach and pure unalloyed viciousness the likes of which we’ve seen many times in the past. 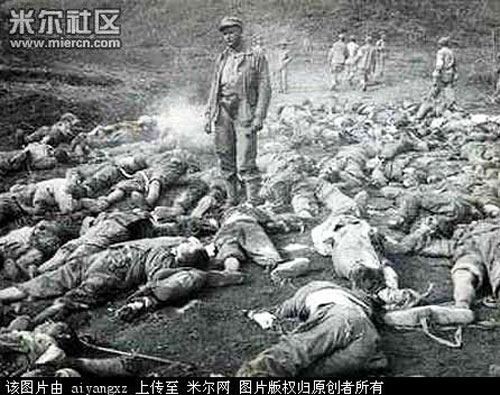 “By the fall of 1952, there were no effective targets left for US planes to hit. Every significant town, city and industrial area in North Korea had already been bombed. In the spring of 1953, the Air Force targeted irrigation dams on the Yalu River, both to destroy the North Korean rice crop and to pressure the Chinese, who would have to supply more food aid to the North. Five reservoirs were hit, flooding thousands of acres of farmland, inundating whole towns and laying waste to the essential food source for millions of North Koreans. Only emergency assistance from China, the USSR, and other socialist countries prevented widespread famine.” (The Destruction and Reconstruction of North Korea, 1950 – 1960, in The Asia-Pacific Journal, Japan Focus)

Repeat: “Reservoirs, irrigation dams, rice crops, hydroelectric dams, population centres” all napalmed, all carpet bombed, all razed to the ground. Nothing was spared. If it moved it was shot, if it didn’t move, it was bombed. The US couldn’t win, so they turned the country into an uninhabitable wastelands. “Let them starve. Let them freeze. Let them eat weeds and roots and rodents to survive. Let them sleep in the ditches and find shelter in the rubble. What do we care? We’re the greatest country on Earth. God bless America.”

This is how Washington does business, and it hasn’t changed since the Seventh Cavalry wiped out 150 men, women and children at Wounded Knee more than a century ago. The Lakota Sioux at Pine Ridge got the same basic treatment as the North Koreans, or the Vietnamese, or the Nicaraguans, or the Iraqis and on and on and on and on. Anyone else who gets in Uncle Sam’s way, winds up in a world of hurt. End of story.

Is there a way to end this pointless standoff between Pyongyang and Washington, a way to mend fences and build trust?

Of course there is. The US just needs to start treating North Korea with respect and follow through on their promises. What promises? 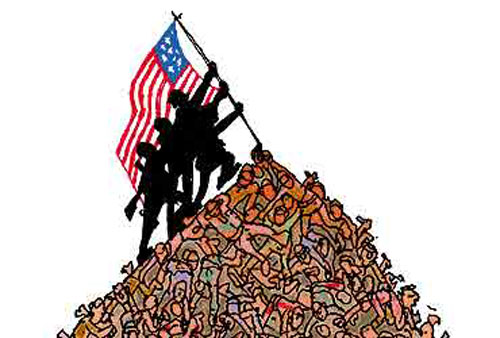 The promise to build the North Korea two light-water reactors to provide heat and light to their people in exchange for an end to its nuclear weapons program. You won’t read about this deal in the media because the media is just the propaganda wing of the Pentagon. They have no interest in promoting peaceful solutions. Their stock-in-trade is war, war and more war.

The North Korea wants the US to honour its obligations under the 1994 Agreed Framework. That’s it. Just keep up your end of the deal! How hard can that be?

Here’s how US President Jimmy Carter summed it up in a Washington Posteditorial (November 24, 2010):

“…in September 2005, an agreement … reaffirmed the basic premises of the 1994 accord (The Agreed Framework). Its text included denuclearization of the Korean Peninsula, a pledge of non-aggression by the United States and steps to evolve a permanent peace agreement to replace the U.S.-North Korean-Chinese cease-fire that has been in effect since July 1953. Unfortunately, no substantive progress has been made since 2005.

This past July I was invited to return to Pyongyang to secure the release of an American [citizen], Aijalon Gomes, with the proviso that my visit would last long enough for substantive talks with top North Korean officials. They spelled out in detail their desire to develop a denuclearized Korean Peninsula and a permanent cease-fire, based on the 1994 agreements and the terms adopted by the six powers in September 2005.

North Korean officials have given the same message to other recent American visitors and have permitted access by nuclear experts to an advanced facility for purifying uranium. The same officials had made it clear to me that this array of centrifuges would be ‘on the table’ for discussions with the United States, although uranium purification – a very slow process – was not covered in the 1994 agreements.

Pyongyang has sent a consistent message that during direct talks with the United States, it is ready to conclude an agreement to end its nuclear programs, put them all under IAEA inspection and conclude a permanent peace treaty to replace the ‘temporary’ cease-fire of 1953. We should consider responding to this offer. The unfortunate alternative is for North Koreans to take whatever actions they consider necessary to defend themselves from what they claim to fear most: a military attack supported by the United States, along with efforts to change the political regime.”
(North Korea’s consistent message to the U.S., President Jimmy Carter, Washington Post)

The Trump team is sticking with a policy that has failed for 63 years and which clearly undermines US national security by putting American citizens directly at risk. 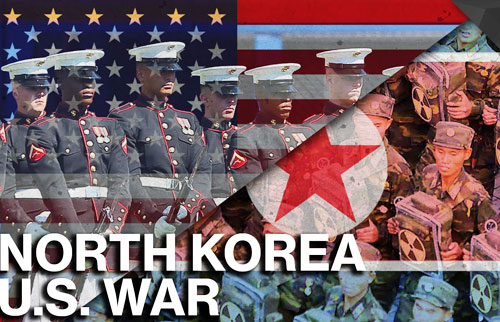 To preserve the image of “tough guy”, to convince people that the US doesn’t negotiate with weaker countries, to prove to the world that “whatever the US says, goes”? Is that it? Is image more important than a potential nuclear disaster?

Relations with the North can be normalized, economic ties can be strengthened, trust can be restored, and the nuclear threat can be defused. The situation with the North does not have to be a crisis, it can be fixed. It just takes a change in policy, a bit of give-and-take, and leaders that genuinely want peace more than war.

Satanists are responsible for chaos in the Middle East