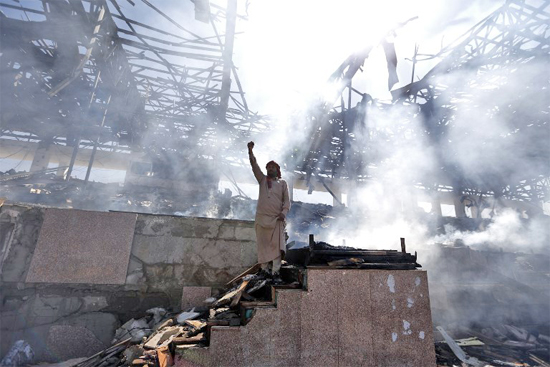 The New World Order ideology makes no sense in the Middle East at all. But because the New World Order itself is fundamentally Talmudic and therefore diabolical in its political orientation, NWO agents think that chaos is better than peace.

If reason, dialogue and even peace are against their essentially Talmudic ideology, then they will throw reason and dialogue in the trashcan of history and embrace what Jewish Neocon Michael Ledeen called “creative destruction” which is foundational to the current situation in Syria.

So what do they care about? They care about pursuing a satanic enterprise and annihilating anyone who stands in their way. They are scared to death if they happen to know that their imperial power or hegemony start to diminish. Here is what Max Bloom of National Review said: “The impoverished debate over our involvement in Raqqa could result in a war – or a peace – that we regret for decades. As major powers such as Russia and China begin to reassert themselves on the international scene, weakening America’s post-Cold War hegemony, such difficult choices may become more frequent and the ideologies that formed in the Iraq years increasingly outdated. It is an alarming possibility – but one we should be prepared for.”

Bloom seemed to think that he would have a heart attack if the world happens to strike a peace deal with Russia and Syria. He and his Jewish brethren don’t care at all about how Saudi Arabia, an Israeli puppet, has literally liquidated Yemeni men, women and children. For example, in 2015 “Saudi warplanes used toxic gas during… strikes on markets and civilian areas in Sa’ada, leaving a number of people injured and dead. Yemeni locals said that the Saudi warplanes used prohibited weapons in their airstrikes on the Fag Attan area in Southern Sana’a…”

Where did the Saudis get those weapons? From the United States and the British. The war in Yemen, as one observer put it, “has succeeded in impoverishing millions, empowering al-Qaeda in the Arabian Peninsula (AQAP), and now threatens the broader region with increased instability”.

Have the United States, France, and the UK asked the Saudis to stop their diabolical plan? Of course not. Then are those countries really concerned about human lives in the Middle East? Well, consider this excerpt from a news article:

“Yemen, already the Middle East’s poorest country, now faces a catastrophic famine. Sixty percent of Yemenis are at risk of starvation. More than 17 million people out of the population of 24 million are in need of immediate aid. Two years of often indiscriminate bombing by Saudi Arabia and its primary partner, the United Arab Emirates (UAE), have laid waste to Yemen’s infrastructure.

Saudi planes – which are dependent on mid-air refueling capabilities provided by the U.S. – have targeted bridges, roads, factories, hospitals, farms, and even funerals. Unexploded cluster munitions used by Saudi Arabia litter some of Yemen’s most productive agricultural land where they will kill and maim for years to come.

More than 10,000 people – mainly civilians – have died in the war. Thousands – possibly tens of thousands – more will die from starvation and disease in the months to come.”

Now get this: “In his meeting with bin Salman in Washington, President Trump boasted about $12.5 billion in finalized sales of American weapons to Saudi Arabia. In May 2017, he chose Saudi Arabia for his first foreign trip as president and signed a record $350-billion arms deal.”

And now those political rascals are telling us all that they are concerned about are the alleged chemical weapons in Syria? Do they really think that they can fool all the people, all the time?

1. This brutal aggression is a clear violation of the international laws and the UN Charter, because it is an unjustified assault on a sovereign country, member of the UN;
2. It causes us great pain that this assault comes from powerful countries to which Syria did not cause any harm in any way;
3. The allegations of the USA and other countries that the Syrian army is using chemical weapons and that Syria is a country that owns and uses this kind of weapon, is a claim that is unjustified and unsupported by sufficient and clear evidence;
4. The timing of this unjustified aggression against Syria, when the independent International Commission for Inquiry was about to start its work in Syria, undermines of the work of this commission;
5. This brutal aggression destroys the chances for a peaceful political solution and leads to escalation and more complications;
6. This unjust aggression encourages the terrorist organizations and gives them momentum to continue in their terrorism;
7. We call upon the Security Council of the United Nations to play its natural role in bringing peace rather than contribute to escalation of wars;
8. We call upon all churches in the countries that participated in the aggression, to fulfill their Christian duties, according to the teachings of the Gospel, and condemn this aggression and to call their governments to commit to the protection of international peace;
9. We salute the courage, heroism and sacrifices of the Syrian Arab Army which courageously protects Syria and provides security for its people. We pray for the souls of the martyrs and the recovery of the wounded.

We are confident that the army will not bow before the external or internal terrorist aggressions; they will continue to fight courageously against terrorism until every inch of the Syrian land is cleansed from terrorism. We, likewise, commend the brave stand of countries which are friendly to the Syria and its people.”

Now, can anyone explain to us why the United States attacked Syria and not Saudi Arabia? Can the Trump administration give the world a rational explanation and not an Israeli memo?

It seems that even White House officials are now saying that Trump himself his committing political suicide. A former senior White House official has recently declared: “Syria strike is a big loss for Trump’s America First national security strategy – so-called humanitarian interventionism [is] not what his base voted for”.