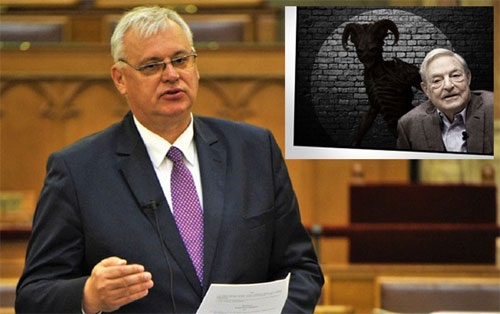 The Hungarian government has established itself as a steadfast opponent of George Soros and the globalist agenda at the political and social levels, but now they have taken the battle spiritual, warning Soros is executing a Satanic scheme to destroy Europe.

András Aradszki, Hungary’s State Secretary for Energy, delivered a speech, in October 2017, to fellow parliamentarians titled The Christian duty to fight against the Satan/Soros Plan, in which he warned of an all-out attack on Christianity, traditional values, and the nuclear family.
“We see this with abortion, euthanasia, same-sex marriage, and the forced politicization of gender theory. The Soros mercenaries do not cite the Holy Father’s thoughts on this”, he said.

“We see the great European attacks against families, in which Soros and his comrades want to destroy the independence and values of nation states for the purpose of watering down the Christian spirit of Europe with the forced settlement of tens of millions of migrants. But the fight against Satan is a Christian duty.”
“Yes, I speak of an attack by Satan, who is also the angel of denial, because they are denying what they are preparing to do – even when it is completely obvious.”
“They frantically try to prove that there is no quota, there is no compulsory settlement, and the Soros Plan does not exist.”

Aradszki spoke on the power of prayer in combating the Satanic-Islamic influence looming over Europe, and the importance of Christians banding together to stand against it, saying “the rosary is the strongest weapon against evil and it is capable of changing history. George Soros will also experience this”.

He also used his address to stress the importance of a new “national consultation”, which is essentially a questionnaire and information campaign directed at voters to educate them on the “Soros Plan” – specifically as it pertains to forced “refugee resettlement” and border controls – and also to garner their feedback on how they would see it handled by the Hungarian government.

The survey, which can be read in full here //abouthungary.hu/news-in-brief/national-consultation-on-the-soros-plan/ goes into great detail about the collusion between Soros and the EU in their agenda to overwhelm the native, Christian population of Europe with primarily Islamic foreigners from Africa and the Middle East via “refugee resettlement” quotas imposed by Brussels, the re-opening of Hungary’s recently secured border, and the political and economic targeting of non-compliant countries.

It also reveals elements of the scheme that have already been implemented in countries like Germany and Sweden, such as light sentencing for crimes committed by migrants (including rape and murder), generously opening welfare systems to illegal immigrants, and policies of reverse integration that force host societies to conform to the cultural and linguistic norms of foreigners.