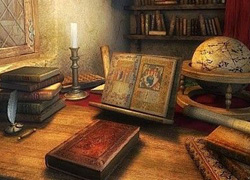 Chemist, apothecary and soothsayer Michel de Nostradame, also known as Nostradamus, made some coded predictions a few centuries ago which are known to have actually come to pass.

For the year 2017, the following prophetic texts appear in Nostradamus’s collected almanacs titled The Prophecies.

His prophecies, which he wrote in four-line verse, are of course open to interpretation – but here are some verses that could possibly shed a little light on what we can expect in 2017:

“For forty years the rainbow will not be seen.
For forty years it will be seen every day.
The dry earth will grow more parched,
and there will be great floods when it is seen.”

“The great man will be struck down in the day by a thunderbolt.
An evil deed, foretold by the bearer of a petition.
According to the prediction another falls at night time.
Conflict at Reims, London, and pestilence in Tuscany.”

3. A battle at sunset

“Shortly before sun set, battle is engaged.
A great nation is uncertain.
Overcome, the sea port makes no answer,
the bridge and the grave both in foreign places.”

“Pestilences extinguished, the world becomes smaller,
for a long time the lands will be inhabited peacefully.
People will travel safely through the sky (over) land and seas:
then wars will start up again.”

“Letters are found in the queen’s chests,
no signature and no name of the author.
The ruse will conceal the offers;
so that they do not know who the lover is.”

6. A weird version of Animal Farm

“A fox will be elected without speaking one word,
appearing saintly in public living on barley bread,
afterwards he will suddenly become a tyrant
putting his foot on the throats of the greatest men.”

“Twice put up and twice cast down,
the East will also weaken the West.
Its adversary after several battles
chased by sea will fail at time of need.”