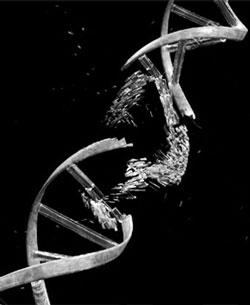 New research has revealed the extent of the damage smoking causes to human DNA – in the lungs as well as other parts of the body.
The study, published Nov. 4, 2016 in the journal Science, was conducted by researchers from several institutions who analyzed more than 5,000 tumors from both smokers and non-smokers. What the scientists found allowed them to better understand the mechanisms involved in the mutation of cells and how they lead to cancer.

Ludmil Alexandrov, co-lead author of the study, said: “This study offers fresh insights into how tobacco smoke causes cancer. Our analysis demonstrates that tobacco smoking causes mutations that lead to cancer by multiple distinct mechanisms. Tobacco smoking damages DNA in organs directly exposed to smoke as well as speeds up a mutational cellular clock in organs that are both directly and indirectly exposed to smoke.”

Smoking a pack of cigarettes per day for a year leads to the development of as many as 150 extra mutations in every lung cell – these mutations can also be found in the voice box, mouth, liver, bladder and other organs.

Smoking is linked to 17 types of cancer

The study was designed to look more closely at the specific root mechanisms that lead to the development of cancer in smokers – smoking is linked to 17 types of cancer and the chance of a smoker’s developing cancer is far greater than that of a nonsmoker.

In fact, male smokers are 23 times as likely to develop lung cancer as those who never smoked – a woman’s risk is 13 times that of a nonsmoking female.
Partly due to the many dangerous and carcinogenic chemicals found in cigarettes, trying to understand precisely how smoking damages cells and causes cancer is a complex undertaking.

From The Guardian:
“More than 70 of the 7,000 chemicals found in tobacco smoke are known to cause cancer. Some damage DNA directly, but others ramp up mutations in more subtle ways, often by disrupting the way cells function. The more mutations a cell acquires, the more likely it is to turn cancerous.” 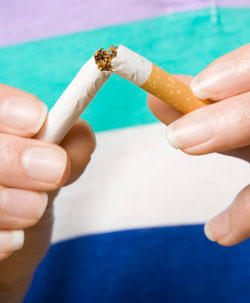 Smoking is like playing a game of Russian roulette, according to Alexandrov. “You can miss the right genes” he said. “But if you smoke you still play the game”.

In other words, smoking will definitely cause “mutations at random points in the genome”. Many of these mutations will cause no harm, but others might. The random factor explains why some smokers never develop cancer while many others do.

The mutational pattern was linked to benzopyrene, one of the chemicals contained in cigarette smoke.

Effects of smoking on other organs

Another important aspect of the study involved the effects of smoking on other organs in the body. The researchers discovered that smoking speeds up the “molecular clock” in the cells of organs not directly exposed to smoke, including the pancreas, bladder and kidneys.

This speeding up process also increases the rate at which mutations accumulate in the organ tissues. The research could help lead to developing new methods of cancer prevention, and the techniques used in the study can be applied to further research into other causes of cancer, such as alcohol and obesity.

According to Alexandrov, the important message people should understand and take notice of regarding this study is that even smoking a few packs of cigarettes in one’s lifetime causes permanent mutations within the body. “They do not go away” he said.