South Korea to the US: No more wars for you

Washington wants war and bloodshed because the Israeli regime is dictating what needs to be done. Trump is allowing that to happen. He is conniving with an essentially diabolical system, and this is really dangerous. 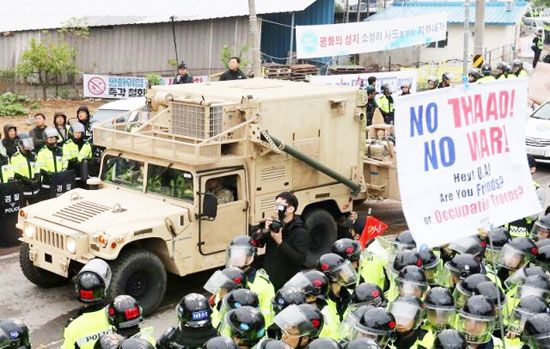 Trump is asking South Korea to pay for an anti-missile system (THAAD) that will cost at least $1 billion dollars, and South Koreans are basically saying that they cannot afford it. Hundreds of protesters in the town of Seongju carried signs which said: “No THAAD, No War” and “Hey, US! Are you friends or occupying troops?”.

In April 2017, those protesters clashed with the police and began to throw water bottles at military trailers. In essence, those people are saying, “We didn’t sign up for this.”

“South Korea has slammed US President Donald Trump’s suggestion that Seoul should pay for the Terminal High-Altitude Area Defense missile system that is now being deployed in the country. Trump had earlier questioned why the US was paying for the system that he valued at $1bn (£775m).”

Kim Ki-Jung, foreign policy adviser to presidential candidate Moon Jae-in Moon and professor at Yonsei University, said: “Even if we purchase THAAD, its main operation would be in the hands of the United States. So purchasing it would be an impossible option. That was our topic when we were considering the options.”

Even China has criticized THAAD, saying that “the anti-missile system undermines [South Korea’s] own national security.”

South Koreans are realizing that the only people who actually benefit from military programs and defense systems such as THAAD are defense contractors and the rich and powerful, not the average person. If there is no war, and if Kim Jung-un is not really a threat, then anti-missile systems are practically worthless. And those who have built those systems are, well, going to lose money.

In other words, perpetual wars, perpetual hatred and perpetual deaths are actually good for some people. In the same vein, ISIS is good because military contractors are profiting from that. It has been reported that the Pentagon is selling “$300 million of military hardware to the Kurdish army.”

In short, it is foolish for the Trump administration to provoke a country like North Korea. Nothing good has ever come out of perpetual wars. Trump seems to have learned virtually nothing from the wars in Iraq, Iran, Afghanistan, and Libya. As US intelligence veteran Mark Dankof has recently said during an interview with Press TV, Trump “Is a dangerous man … and I see the possibility of a global catastrophe.”

What we now desperately need at this juncture is good old practical reason in the political landscape. Russia has made several attempts to cooperate with the United States, but the Neocons in Washington have resolutely refused to talk. Why? Obviously, because the Neocons and the Israeli regime have already rejected Logos in all its manifestations. The moral and political order is antithetical to the Neoconservative ideology, and that is one reason why virtually no serious person can understand why Washington is refusing to have reasonable and practical dialogue with other nations they disagree with.