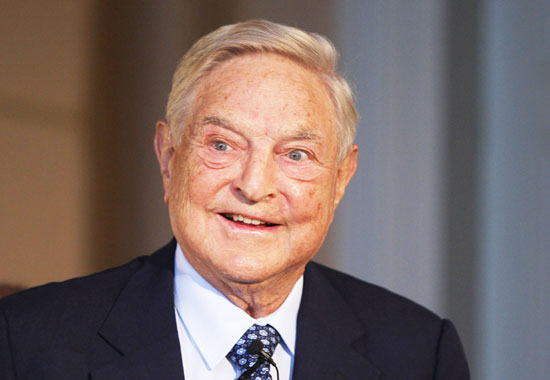 Billionaire investor George Soros sure had a run on establishing a bold new world. Though he continues to pour millions into protest and crises worldwide, the fading dream of either an “Open Society” or even “Cosmopolitanism” and a globalist doctrine are surely lost for his lifetime. As the famous cliché goes, “the jig is almost up” George. Lone wolf speculator or Illuminati captain, the world’s most famous billionaire villain has impacted our lives in ways most cannot imagine. Here’s a look into Soros and the Utopia that cannot be.

When George Soros was a boy in Hungary during World War II and the German occupation, he collaborated with the Nazis to help confiscate the possessions of Jews who would be detained, and more-often-than-not killed. Soros has never been apologetic about this, and has often stated that 1944 was the best year of his life. Today we see the footprints of Soros from the disaster Yugoslavia and Bosnia became, to the current destabilizing chaos. No matter how one gauges George Soros, it’s clear has played an integral, damaging and often mysterious role in the world. News these days frames the legendary billionaire as a kind of evil genius behind world chaos. But who is George Soros really?

Soros was born in August of 1930 into wealth in Budapest. The son of a Jewish lawyer named Tivadar Soros (changed from Theodor Schwarz), young George escaped the Nazi death camps by becoming part of the final solution. Later in the war the teenage Soros was secreted out of Budapest and on to London, where he somehow moved up the academic and later banking ladders of life. While it is not a purpose here to offer a biographical portrait, it is important to establish the essence of Soros as an amoral manipulator first, which the “Sixty Minutes” interview with Steve Kroft establishes. Secondly, Soros is one of several globalist billionaires who were “ushered” into power.
Some evidence suggests George Soros did not work his way to the top of the heap, as popular fairytales tell us. In the real world the “self made man” scarcely exists at all, if the truth is known about men like Soros, Bill Gates, Jeff Bezos, the Google boys, or a cadre of other miracle workers. Could originally though Soros was like these others, the new wave of world mechanics set in place by very old and very big money. But now we cannot be so sure.

Looking at Soros’ life after he left Bucharest in 1947, he attended the London School of Economics and was a student of the noted philosopher Karl Popper, from whom he metamorphosed his current views on society. It was Popper’s work The Open Society and Its Enemies (1945) which served as a model for Soros’ Open Society Foundations. In an article written by Soros for the Atlantic, he outlines in plain sight his goal to transform the world into a kind of amoral utopia where there is no real truth. Reading Soros’ words we are at once mesmerized and stunned at the surgical and antiseptic core of his ideas. Soros also admits openly the “subversive” nature of this operations in Europe after the fall of communism.

The more we read of Soros’ work, the more we recognize his form of madness. Ideas like “communist menace” plaque his ideals like a beast, as does the fascist intonation. What’s most acutely illustrative of a twisted mind though is the way Soros’ dogma turns in onto itself. Not only are communism and fascism the enemy, so is excessive individualism – or in other words, his own “Open Society” utopia. Soros is a man given immense power, whose only message is circular chaos. The only thing he seems to really believe in is what he calls the “magic of the marketplace” – which may be some twisted childhood nightmare from Nazi times? Whatever the symbiosis of Soros’ lunacy, he actually seems to believe that some higher form of economics is our God. As crazy as this assertion sounds, we assure you this is where this twisted mind lives.

We may found ourselves understanding Soros a bit better, and not knowing whether to feel compassion for him. We try and imagine being an atheist or amoral, and being at the gateway to the ever after like Soros is at 86 years of age. But what is more interesting now is the notion of Soros the individual titan of societal change, or that of an immensely powerful henchman of some unseen hand. In the past we considered George Soros part of some ultra-powerful cartel or secret society like the Illuminati. Reading more and more it is not so sure now, because there are some powerful people like this, and some who were totally independent in thought and deed. Soros the investor is a simple matter, but the supposed idealist underneath is still an enigma.

Soros and his Quantum Fund make money like Las Vegas makes money, playing the margins and rigging the game in their whenever possible. In this regard, Soros could be just a bigger archetype of the local tyrant who owns the savings and loan.
If Soros was recruited and mentored by any group, this would have had to have taken place about the time he went to work for Julius Singer and Ernst Friedlander in London, or sometime thereafter, perhaps when he left for F.M. Mayer of New York. A good bit of research into the names, people, places, and deals surrounding these financial firms has been done. To be clear, there’s really not a lot of detailed information out there about Soros’ early dealings. It is interesting to note that Julius Singer was Hungarian as well. Ernst Freidlander was also the founder of the first merchant bank in South Africa, which is interesting since Soros made efforts to destabilize that country’s economy in the 1970s. Other likely association include Van Gogh owning Berlin bankers who joined Singer & Friedlander in the 1920s, and now obscure London bankers like Max Ullman. Some of the dealings of these bankers during the war years are interesting, this 1943 Ullman & Co. transaction transfer document listing Swiss banking concerns is a curiosity.

Whatever connections were made during these years will probably never be fully known. As the story goes the son of F.M. Mayer, Robert Mayer recommended Soros for a position at the New York firm. Then Soros became a kind of specialist in European stocks about the time the European Common Market came into being. The Coal & Steel Community (later known as the Common Market) was the seedling for what is now the European Union. For all investigating though, Soros’ movements from one firm to the other, and his gaining experience, they all seem “organic”. This is not what we expected to be honest, but “lone wolf” Soros makes as much sense as some Orwellian conspiracy now. Subsequent trading jobs put George Soros in the thick of world developments even before 1963, when then President John F. Kennedy’s administration stifled Soros’ specialty with a tax on foreign securities.

Regarding George Soros one thing is certain, his life and deeds have marked time. Don’t mistake the candor here for a conciliatory note, people like Soros are despised for their unwieldy and inhuman character – the nonchalant way they rationalize everything. It is especially despised for how Americans were being played by Soros in the 2016 Presidential campaign. The bottom line is, people are going to get hurt or die because of Soros funding domestic unrest, and for what? There is no telling how many billions of dollars Soros has leveraged for a philosophy based on the certainty of uncertainty. With nothing sacred at all, one man has been knighted with the power for real change, and has convoluted the power into a weapon of upheaval only. Europe is in tatters, America is split down the middle, wars rage, and in George Soros’ 86 years humanity is absolutely no better off. This reminds us of a passage about reshaping the impressions of humanity from the Zorba the Greek: “Let people be boss: don’t open their eyes. And supposing you did, what’d they see? Their misery! Leave their eyes closed boss, and let them go on dreaming. Unless, unless. Unless when they open their eyes you can show them a better world than the darkness in which they are gallivanting at present. Can you?”

Zorba showed the dilemma in which humanity is situated. Kazantzakis was speaking of left and right idealism, and of a Utopian middle ground. This is why George Soros is a tragic figure. Dutch analyst, Holger Eekof, always chides when he hears rage about Soros machinations; “Soros is not evil, he’s just doing what he knows best.” Soros’ brand of idealism is Biblical, isn’t it? But Soros is not the anti-Christ, or is he? The lost potential, the utter waist of such a brilliant mind, the world a sane George Soros might have helped create – this is true darkness. Lost opportunity costs are, after all, the great Devil looming over such men. What a shame.

God in Politics or a Godless World: Time to Choose

Gardasil Scientist: Vaccine Is Riskier Than Getting Cervical Cancer