God in Politics or a Godless World: Time to Choose 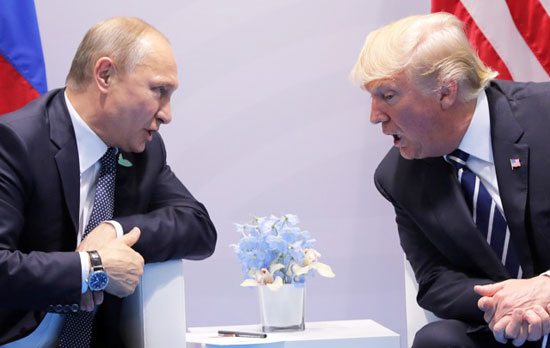 The geo-political struggle between so-called “globalists” and their nationalistic (populist) counterparts has reached a feverish pitch. With trust and belief systems in the crucible, everything from our economic beliefs to our spirituality is up for grabs. At the center of all this, America’s President Donald Trump and the Russian Federation’s President Vladimir Putin stand out as media targets and as gladiators against a kind of neo-liberal hysteria. Here are some thoughts on the globalist order and on the incontrovertible role conflict we just recognize – our religiousness is being fundamentally challenged.

The Americans for Putin Facebook profile has 3060 “likes”. The Vladimir Putin Fan Club on Facebook has 122,196 members. On Instagram, Twitter, VK, and a dozen more social media outlets thousands of Putin fan profiles exist, with millions on millions of followers. Furthermore, a Gallop poll being broadcast via mainstream media, Mr. Putin’s approval rating is up among Americans. The media in America and Europe would like to attribute this popularity to the Trump election win, but the Russian president’s favor with millions of Americans has nothing to do with Trump or being Republican. Vladimir Putin is more popular than you imagine.

Putin’s popularity has many facets, not the least of which is the perception that the Russian president is what Americans would call “a straight shooter”. In this, Putin is joined by Donald Trump for the latter’s “off the cuff” plain speak. But besides the lingo and tone these two exhibit, a more fundamental shared ideal appeal to the biggest demographic set of all in America – Christians. If we look at both Putin and Trump, we can see a kind of cohesiveness between the America leader and Russia’s president via religion and spirituality as well. Let’s look at something Putin said in a state of the union speech in 2014: “Many Euro-Atlantic countries have moved away from their roots, including Christian values. Policies are being pursued that place on the same level a multi-child family and a same-sex partnership, a faith in God and a belief in Satan. This is the path to degradation.”

Such statements resonate with Americans who have access to them. While the far left condemns any synergy of political will and religiosity, separating church and state has nothing to do with ignoring tradition and values. That separation is needed as a check and balance of control, nothing more. The danger in the 21st century is not the undue influence of God (however defined and worshipped) but the antithesis of spirituality. Billions and billions of people believe in something higher and better than self or government, and the new liberals evangelize belief in extant humanity, and nothing more. In a very real way, the neo-liberal political philosophy is a return to beastlike ideals – at least for devout believers. Without straining geo-political theory to its extremes, looking at Donald Trump’s support base and at his rhetoric, it bears fruit here. It’s a stark irony here that the Jeff Bezos’ far left bull horn The Washington Post cites Trump religious penchant from his inauguration speech: “When you open your heart to patriotism, there is no room for prejudice. The Bible tells us how good and pleasant it is when God’s people live together in unity. We must speak our minds openly, debate our disagreements honestly, but always pursue solidarity.”

Now the WP wanted to insinuate Donald Trump as some kind of self-proclaimed “demi-god” in their story, but sometimes the truth is used to create a great lie too. But when Trump said of America’s children, “they are infused with the breath of life by the same almighty creator” he mirrored the longstanding essence of Vladimir Putin. For the left, the agnostics and atheists both Trump and Putin are a real enemy in their eyes. Much was made of Trump failing to mention “non-believers”, in the same way the world LGBT community railed at Mr. Putin over freedoms to march in the streets in front of little kids. To understand how world policies and ideas are in conflict, we must use plain language and forget political correctness. Mr. Putin has done this, and so has President Trump. So should we all.
The point here is simple. America and Russia are two nations founded on Christian principles. Christian principles have guided both these nations throughout their histories. But the question “What are these principles, and how do they fit into a political context?” is logical. This goes to the heart of the matter of our current crises actually.

75% of Americans today identify with a Christian religion, down from 80% when Barack Obama took office. Russia shows essentially the same religiosity footprint, with somewhere between 60% and 75% identifying with Orthodoxy or another form of Christian faith. Russia, it should be mentioned, is far more difficult to measure officially, as governmental numbers do not even exist for such things. Regardless of the minute fraction of deviation, it’s completely fair to call either of these nations “predominantly religious”. Where the problem of religiosity arises is in the rule of law and within the structure of democratic thought. You see many people confuse “religious freedom” with the intent of the framers of the US constitution of creating “religious tolerance”. And it is in the latter term we can finally converge on the truth of either nation’s idealistic path.

America is a nation based on Christian values and principles. Were it not, not a living soul of another faith would walk among people. We do not have to examine New Testament scripture for long to discover religious tolerance. Romans 14:1-4 reads: “As for the one who is weak in faith, welcome him, but not to quarrel over opinions. One person believes he may eat anything, while the weak person eats only vegetables. Let not the one who eats despise the one who abstains, and let not the one who abstains pass judgment on the one who eats, for God has welcomed him. Who are you to pass judgment on the servant of another? It is before his own master that he stands or falls. And he will be upheld, for the Lord is able to make him stand.”
People in the United States are not taught to cast out people of other faiths. Christianity, like many religions, is based on a belief in love and hope. It is interesting that both Putin and Trump have spoken on this very subject. But discussions of minute faith and the doctrines etc. have no place here except to illustrate a point of current ideological crisis. Putin and Trump, their supporters exert a frustration and fearfulness that core principles are being assailed.

The Globalists are led by notorious atheists and agnostics for the most part. The current West-East divide brought on by the Obama administration’s push to complete the globalist doctrine, it is a movement bent on the destruction of all traditions that stand in the way of one flawed model of “Cosmopolitanism”. The George Soros types of this world believe (or profess to believe) humanity should be one community with one shared sense of morality. The problem is, the morality they seek to stamp into our foreheads is a faithless, godless one. The Neo-Left is about human gods, and a world where permissiveness is bastardized from tolerance and patience.

Make no mistake here, the globalist doctrine leaders like Angela Merkel, banking elites like the Rothschilds, or even Saudi Sheiks adhere to and promote is not based on a hopeful and humane rule of laws. The “morality” these influential players seek is their idea of right and wrong – their notion of social justice disguised like always, as a Utopia where anything goes – an ethnocentric ideal where carte blanche is issued to everyone.

This is the same paradigm that has always existed in international and national relations and politics. The crux of my argument here can be gleaned by reading this Bill Moyers story about rules for religion in politics. At a point Moyers turns talks about the interests of the minority of agnostics, atheists, and humanists in insuring discussions of religion in politics become more “delicate and dangerous”, as Moyers puts it. The political correctness of the far left, as President Trump so often says, is central to America’s internal divisions now. In no realm is this truer than the religious-political realm. Quoting Thomas Land of Emory University’s Candler School of Theology, Moyers reveals the inextricable reality: “Atheists, as well as agnostics, skeptics, and humanists, have a huge stake in how religion plays out in our democracy and are making their voices heard—smashing idols in the sanctuary”, as Land writes in Christian Century.

The philosophical roots of “Cosmopolitanism” are quite wonderful actually. Diogenes of Sinope (c. 412 B.C.), who was the founding father of the Cynic movement in Ancient Greece, and his ideas of being a “citizen of the world” gave way to what is known as “Stoic cosmopolitanism”, or a self image emanating outward to other people with a feeling of affinity and endearment. This form of Stoicism is supposed to lead to a higher form of existence called oikeiosis, or family basically. The problem in the neo-liberal and globalist sense is, the head of this new family is not God the father or Buddha even, but some Frankfurt banker or Washington think tank guru. The hierarchy the Soros and Rockefeller types condone is one made in their own image. And that image has no place for what they perceive as our petty faith in a universal good. Set against this warped humanist ideal are a very few religious leaders.
And so much for political correctness…