TARGET IRAN: The Neocon Zionist Plan for an Apocalyptic War in the Mideast (2) 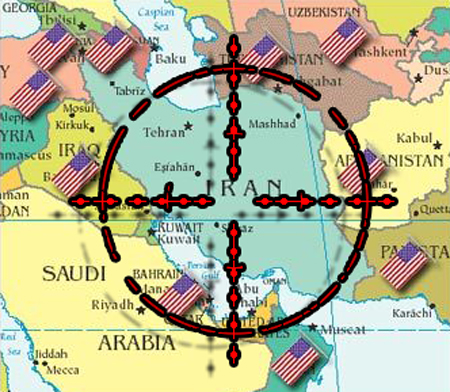 As a matter of historical fact, no POTUS has ever declared war on Syria, so the current U.S. military occupation is unlawful. Since Congress has yet to approve any military intervention in Syria (it would be unconstitutional anyway), Trump’s troops were stationed there illegally for more than three years. Curiously, the UN has refrained from addressing the legitimacy of the Syrian War.

The entire General Assembly knows it was started by the Obama administration after being provoked by Hillary Clinton’s State Department. The C.I.A. and U.S. military have materially supported every phase of the warfare at the instigation of Neocon hawks like John McCain and Lindsey Graham.

The UN Security Council is well aware that it was foreign aggression that triggered and has sustained the Syrian conflict; and that it was never a civil war. Every country involved is cognizant of the stark reality that it was NATO’s Operation Gladio B which was used to carry out the Arab Spring. The only logical conclusion is that the U.S.-led NATO, with the UK leading from behind while Israel manipulates the major NATO military members, are the true warmongers. Hence, NATO is now well known as the North Atlantic Terrorist Organization throughout European military leadership and intelligence circles.

The Neocon warmongers know that the more countries they can incite to war, the greater the chance a regional conflagration will ensue. What they really need, however, is substantial involvement from both sides of the clash. They know there are unique ‘windows of opportunity’ for combat that, once closed, will be gone for good. Therefore, Trump’s best response is to do everything in his power to slow them down. “We’re coming out of Syria very soon. Let the other people take care of it now,” Trump said during a speech in Richfield, Ohio.

Why Armageddon? Because the power elite are going down!

The critical point here is that the power elite knows they are going down, and sooner than later. And, they know that they have only a couple of ways out of their preordained and impossible predicament.

The first is to start a world war that sufficiently terrorizes the participants as it traumatizes the spectators. This stratagem has been used from time immemorial by governments the world over to distract the populace from widespread governmental criminality, political malfeasance and official wrongdoing. In fact, there is no more effective way of diverting the attention of the citizenry than to wage war on a fictitious enemy.

Their second option is to execute a controlled demolition of the Global Economic & Financial System. While this alternative will make many folks quickly forget the ongoing globalist crime wave, it may also backfire. Because the Internet has made available so much truth about the controlling crime families, as well as the actual history of the major wars over the past two centuries, who doesn’t know the perps by name and face by now.

Were TPTB to crash the markets, particularly the stock and/or bond markets, their own corporate empires could also collapse in a day and night from the inevitable domino effect. Not only that, the jobless masses just might pick up their torches and pitchforks and make short work of you know who.

There’s nothing else that scares the power elite like people power. They know that mob mentality can degenerate very rapidly into a “French Revolution” scenario. And given the amount of extreme rage being expressed across the World Wide Web, the victimized around the globe won’t even take time to set up guillotines or erect gallows. Consequently, the warlords and banksters who lead this international crime syndicate have no choice but to evacuate the premises. Unless, of course, they start WW3 or crash the markets first.

The following headlines represent only a small number of major events that depict the March Madness of 2018. This kind of deliberate distraction must have been a cover for something quite HUGE going on in the background.


Will Governor Jerry Brown Be Arrested, Prosecuted and Imprisoned… for Repeatedly Violating Federal Law and Recklessly Endangering the U.S. Citizenry?


Why is Trump making another misguided move against Russia?

Were one to review all the wild and wacky things that took place from March 1st thru March 31, it’s clear that the mainstream media (MSM) was completely taken over by Operation Mockingbird. In other words, nothing was released by the MSM organs of propaganda unless explicitly approved by the C.I.A.

The crucial matter is that there is always a series of destabilizing events staged just prior to any major black operation of global import. This tactic knocks everyone off balance so that the perps can control the crime scene(s) and the narrative. The pervasive chaos and palpable anxiety create an atmosphere of unpredictability and trepidation.

This is just what TPTB thrive on before they work their black magic.

It’s quite ironic that while globalists like George Soros work overtime to strip Americans of their firearms, they conduct nonstop and massive arms trafficking operations throughout the Mideast and other hotspots. The Parkland false flag school shooting was specifically carried out for this very reason–to outlaw the right to bear arms.

The CIA creations of David Hogg and Emma Gonzalez were proof positive of March Madness on steroids. And these two were exposed agents of Deep State. Their chutzpah and hubris only intensified by the day. Which pointed to something very BIG in the offing. That meant that there was another OPERATION GLADIO C false flag in the works – a mammoth psyop that will take their national gun grab to the next level. 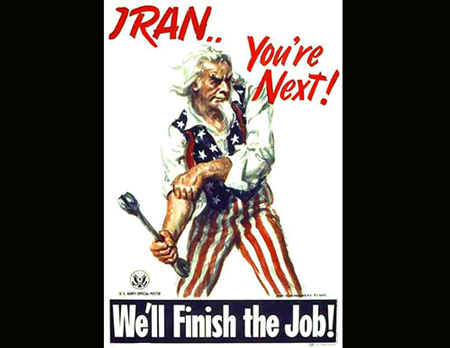 Make no mistake about it: the Neocons are determined to carry out regime change in Iran. Every move the Zionists make in the Mideast is designed to remove the present government in Tehran.

Israel’s stated pretext for its sporadic attacks on Syria is to limit the influence of Iran near the Golan Heights. Tel Aviv is particularly wary of the buildup of Hezbollah fighters and armaments in the same area. The Israelis will commit any war crime necessary to disrupt the Hezbollah weapon distribution networks so close to their border.

The surreptitious plan to overthrow the Ayatollah and current administration has been on the drawing board for many years. Iran is the last of several countries that the Neocon Zionists vowed to conquer in their quest to establish Greater Israel. General Wesley Clark: “The US will attack 7 countries in 5 years”.
The only way to properly understand the incessant “caldronizing” of the Middle East is to comprehend the true depth and breadth of the Greater Israel project It was Putin’s Russia that exposed and impeded this maniacal scheme with devastating air force attacks in 2015.

While Iran poses the biggest threat regionally to the Greater Israel project; Russia provides military muscle to torpedo any attempts to expand into sovereign territories (such as Syria). Israel has repeatedly demonstrated that it will steal land and water bodies whenever they can get away with it.

Because Russia and Iran are now joined at the hip, the Western warmongers face a formidable foe. When China is added to this mutual defense alliance, it’s clear they cannot be defeated individually or collectively. Nonetheless, it is Iran that remains in their sights.

The world has become a very complicated and dangerous place. With the Internet running at full tilt, the globalist plans for world war are being thwarted at every turn. Implementing their false flag attacks and subsequent psyops just gets harder by the day.

That’s not to say the psychos in charge won’t try to blow up the Middle East! They have already shown themselves willing to destroy anything, anywhere, anytime in the interest of achieving their NWO objective of One World Government. That totalitarian superstate is about enslaving all of humanity under the rubric of one currency, one religion, and one legal system administered by communist governance and fascist dictatorship.

However, the globalists know that they must first disarm the American people. They know that there will be “a patriot hiding behind every blade of grass” should a foreign power or UN troops ever encroach on U.S. sovereignty. Therefore, the ongoing gun grab will only intensify until something gives. After all, the Purple Revolution can only begin in earnest when the Right is defenseless.

What will it take to sufficiently frighten the traitors? Only when the political class and corporate leadership fear We the People more than they fear their masters in Deep State will things really change in America. It’s really that simple. Which means that the American people, themselves, must take back the Republic. The POTUS is only one man; he can’t do this alone. How the people actually organize to accomplish this necessary feat is certainly subject to much discussion and debate. Nevertheless, it’s a civic task that cannot be shunned or ignored.