Does establishment media believe that it alone knows what we all should think about science and history? The internationally revered organization TED has in the past created controversy for attempting to censor talks that do not fit with its version of reality, causing many to see TED as an establishment organization that engages in global thought control.

TED’s slogan is “Ideas Worth Sharing”, yet it is clear that there are some ideas that TED feels should not be shared.

Author and historical investigator Graham Hancock has sold millions of books and inspired many more people around the world with his game-changing thoughts on human history and the development of human consciousness, yet his talk, The War on Consciousness, was banned by TED in attempt to prevent the public from considering and sharing his paradigm-changing ideas.

At the same time, a researcher into the field of parapsychology, Rupert Sheldrake, gave a fascinating and enlightening presentation for TED which was also censored for not meeting the guidelines of TED’s advisory board, an entity which apparently has been tasked with the job of deciding what new ideas should be available for public consideration.

These are two highly prominent and forward-thinking scholars with huge international followings. The critical thing they have in common is their willingness to subvert dominant scientific and intellectual paradigms in their quest for truth and understanding of the human experience.

Furthermore, talk by billionaire Nick Hanauer on wealth inequality in modern society was also accused of being passed over and censored by TED because it did not present an acceptable worldview in TED’s eyes. Like the other two thought-provoking and paradigm-shifting presentations, this one also can be found on internet.

Fast forward to the present, journalist and author Graham Hancock has recently posted another case of TED censoring his presentations, this time by displaying an obnoxious disclaimer over a talk he gave entitled, Is The House of History Built on Sand?

Shockingly, the entire 18 minute presentation is flagged and smeared with the following warning to viewers, as though it were a medical threat: 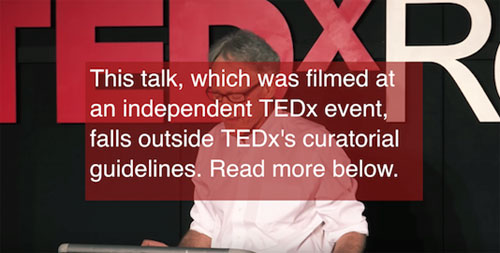 Who exactly is TED protecting? The explanation reads as follows:
“NOTE from TED: Please be aware that this talk contains outdated and counterfactual assertions, and should not be understood as a representation of modern scholarship on ancient civilizations.”

Comments on this matter by Graham Hancock himself are quoted here:

“TED claims it’s about ideas worth spreading, but this is what TED does to ideas put out on its forum that it judges to be alternative or non-mainstream − see attached screenshot, and full talk at this link.

They stick an orthodox health warning over the speaker’s face, smear the talk as ‘outdated and counter-factual’ (see the video description), give no evidence to support the smear and use the opportunity to big up some of their pet mainstream speakers. 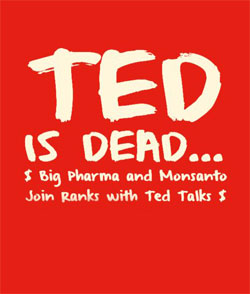 If I was ever in any doubt that TED is a tool of the dominator society that seeks to keep us all asleep and that believes itself to be the fount and guardian of all legitimate knowledge, my latest encounter with the TED organization has settled the matter for me. The attached screenshot is from my TEDx talk, given in the city of Reading in the UK in March (2016). It’s a talk about my latest research into the possibility of a lost civilization and sets out some of the evidence presented in my new book Magicians of the Gods. I was very careful with this talk. Indeed I did something I’ve never done before which was to read it to make sure no slip of the tongue or over-running of the extremely limited time allocated, could be used by TED to delete it from Youtube as they did with my last (talk).

I don’t like reading talks from a carefully pre-prepared script, but having done so in this single case I am quite certain that the ideas I present are NOT ‘outdated and counter-factual’ as TED allege and I challenge them to provide evidence to support this smear.”

Human experience is richer and has more depth than we fully understand, yet there is no question we live in an age where thought control and social engineering is important in maintaining the status quo of strict cultural and scientific materialism which keeps us locked into the corporate-consumer paradigm, serving the economy rather than serving the spirit.

If TED is an organization which truly is about presenting “ideas worth sharing”, then why are well-documented, well-researched presentations countering this paradigm being censored and minimized by TED?

What Exactly Is Agenda 21?