What Exactly Is Agenda 21? 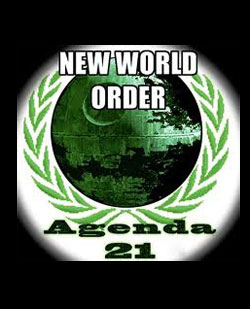 When most folks hear the words “Agenda 21” they have one of three responses:
– “Huh? What’s that?”
– “Oh yay! It’ll turn the world into Utopia and global warming will stop and life will be rainbows and unicorns again!”
– “It’s a plan to remove personal liberty and move us closer to a one-world government. Where the heck is my tinfoil?”

Some folks don’t even believe it exists, others think it exists but is a good thing turned into a nasty conspiracy theory and the majority are blissfully oblivious. Even though many people don’t realize it, we’re all being nudged toward an Agenda 21-ruled world. It’s easy, too, because it promises a green world of lollipops and rainbows and most of it will be “free”.

To put it as simply as possible, Agenda 21 is world domination with a warm, fuzzy glow. Once you understand it, you’ll never look at “regulations” the same way again.

Here’s how it all started

In 1992, peace-loving tree huggers at the UN devised a plan for the world. That’s right – the friendly folks at the UN’s Division for Sustainable Development (DSD) created a master plan for ALL of us.

“Agenda 21 is a comprehensive plan of action to be taken globally, nationally and locally by organizations of the United Nations System, Governments and Major Groups in every area in which human impacts on the environment.” (UN official definition of Agenda 21)

So, let’s see if we understand this correctly.
– “A plan of action”. Got it.
– “To be taken globally”… okay – everyone must participate.
– “In every area in which human impacts on the environment”… yep, that covers everyone and everything in the entire world.

It’s a warm fuzzy way to take over the world! Group hug, anyone?

Agenda 21 is a 350-page action plan divided into 40 chapters. It was developed at a summit in Rio de Janeiro in 1992. The “21” in Agenda 21 refers to the 21st Century. You can read the entire unsettling plot here but the general idea is that the group of “leaders” intends to have a collective finger in every pie on the planet.

I. Social and economic dimensions 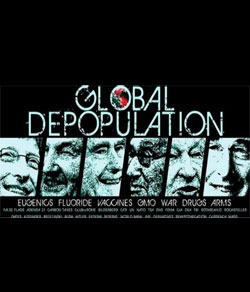 The first section of the plan deals with the people of the world. Particularly, the DSD wants to “help” those in Third World countries live “better”. They’ll be taught:
– How to make more money by putting everyone to work in perfect accordance with the goals of the Agenda;
– How to maintain their health through vaccinations and modern medicine;
– How to govern themselves in accordance with the plan;
– How to control their populations;
– All in all, they’ll learn how to make decisions that will concur with the ideals of the Agenda.

II. Conservation and management of resources for development

This section includes protection of the atmosphere, land, mountains, oceans and fresh waters – everything in the environment of a given country. This means that historical ways of using these resources could be outlawed – changing the basic ways of life for the indigenous people to make way for “progress” and “sustainability”. This gives control of all natural resources to the good folks of the DSD.

Section 2 (specifically Chapter 9, subsection 8) also uses the unproven science of global warming to further the controls placed on the acquisition and use of resources. This section of the articles of Agenda 21 confers vast taxation on resources while allowing huge companies to use the green ideology to receive carbon credits, reallocating money from the power to the rich under a cloak of green hypocrisy.

“… the United Nations is demanding $76 trillion from the first world over the next 40 years to encourage the development of ‘green’ technologies in the third world. The defense of such a reckless agenda has rested on the unwarranted claim that the globe was hovering on the precipice of environmental devastation. ‘Green’ ideology has become the bulwark of older agendas: the nations of the West must end their own prosperity, because that is only ‘fair’ – and it is necessary to save the world from Capitalist greed.” (from The New American)

By specifically outlining the management of all natural resources, it disallows the use of them for any but the 1% in power, effectively keeping people from farming, fishing, mining, or otherwise harvesting the innate supplies provided by their environments. 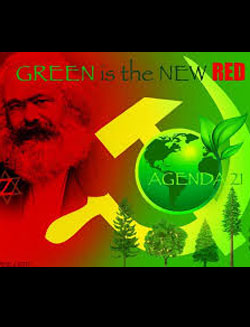 The language in this section implies empowerment of women, children, unions, farmers and indigenous peoples. However, if you dig deeper you’ll discover that all of this equality actually means:
– The abolition of personal property;
– The demise of rural living;
– Mandatory birth (population) control;
– The “redevelopment” of cities.

They intend to warehouse people in small areas for a multi-fold goal. It will make them easier to control, easier to poison and/or chemically sterilize through managed food and water supplies, and will remove personal ownership of natural resources.

The sleight-of-hand empowerment will actually take away the rights of families by disallowing ownership of personal property, curtailing their physical liberty by making all transportation public, and providing a pro-Agenda education/brainwashing for all.

This section describes how to get the whole world on board the happy train to Agenda 21-land.

– Redistribution of financial resources (i.e., taking it away from some and sharing it with others);
– Technology (public transit, “equal” distribution of energy usage, monitoring of behaviors through big brother technologies);
– Science and environmentalism (removing people from rural areas to “save” the natural resources from pollution and mismanagement);
– Re-education (brainwashing with propaganda);
– Restructuring of local governments (installing puppet leaders).

This will be presented as Utopian, but really it will turn everyone into carefully warehoused slaves with just enough food and supplies to make those who don’t think too deeply, content. 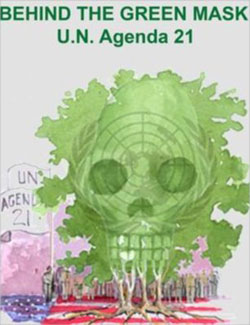 All of this peace and love isn’t just for developing countries. The principles of Agenda 21 are insinuating themselves into the lives of North Americans and Europeans at warp speed. I’ll bet when you read this list, you can see dozens of ways this plan has begun to take root right in your own backyard.

– With the decline of the farms, people are being funneled into the cities in search of work.
– With the decline of the economy, fewer people can afford private transportation and are therefore limited to the places that public transit will take them.
– Support of the local downtrodden is geared to further incite class warfare.
– Separation of families through child protection agencies, Big Brother parenting, mandatory public schools at younger and younger ages, and the dumbing down of the education system is planned to breakdown our society even further.
– Publicly funded health care (like ‘Obamacare’) will dictate toxic vaccinations, secretive sterilization, eugenics of the elderly and less-productive members of society, and mandated birth control.


Agenda 21 is full-spectrum domination by the 1%

Nothing has been left out.

– It guarantees both birth control and death control.
– It promises the basic essentials of life in return for submission.
– It exchanges critical thinking for re-education and brainwashing.
– It destroys the epicenter of the family, society, and culture, allowing only one way to live. It groups the population into small contained areas to be more easily controlled.
– It takes away from some to give to others who will be more easily managed by the promise of a full belly and a warm shelter.

It’s a parasitical representation of the 1%, feeding on the 99%.

And it’s only going to get worse. If people will not wake up!