Telepathy refers to mind-to-mind communication without the intervention of the senses, e.g. knowing what somebody is about to say. Clairvoyance refers to the mind picking up information from the environment, e.g. knowing which card is about to be turned over or what horse will win a race. They are both forms of ESP or extra-sensory perception, a term which covers any communication between an organism and the environment that is essentially psychic in nature, i.e. that cannot not accounted for by sensory contact, including subliminal cues or inference. ESP phenomena have been reported throughout history. 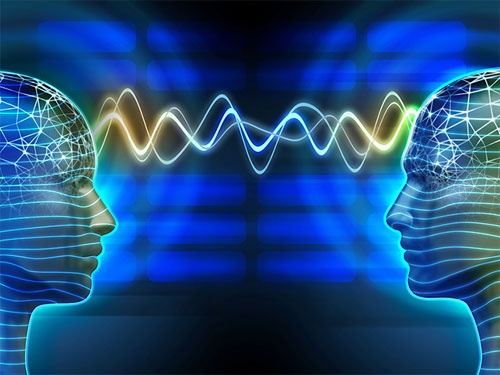 Around the turn of the century, the early psychical researchers collected numerous accounts of psychic phenomena including telepathy and clairvoyance. One common type of telepathy experience is so called crisis telepathy, where individuals suddenly become conscious that someone they are close to has died, even though they are physically distant.

Some early telepathy experiments were based round “mental radio”. Here one person attempts to guess what another person has drawn. Psychologists are skeptical as to their significance as people such as husbands and wives who are close to each other often know each other well enough to predict what the other person is going to draw. Also even though they are free to draw anything, most people select their image from a limited and largely predictable set, which includes a house, a tree and a boat (Sinclair 1962).

From the 1930s through to the 1950s, Rhine conducted many so called “forced-choice” experiments at Duke University in the US. Telepathy experiments involved a sender and a receiver; the sender turned over a card, for example, and tried to send the image mentally to the receiver. Clairvoyance experiments involved the subject guessing the image that the experimenter had turned over without even looking at it. Subjects had to guess the suits and numbers of a series of cards, the number on the face of a dice, or whether an image was a straight line, a cross, wavy lines, a circle or star (the images of the so called zener cards). Subsequent meta-analyses of these experiments show a small but significant effect, i.e. on average subjects do slightly better than chance even where the target is not selected until after they have made their guess precognitively (Honorton and Ferrari 1989).

More recently, Honorton has introduced Ganzfeld experiments. These assume subjects will perform better at psychic tasks if sensory information is blocked out. They also let a machine randomly select the target (which is any one of a thousand-odd images). Meta-analyses of these experiments show very significant effects, possibly because the images are more interesting and/or because blocking out sensory information aids telepathy and clairvoyance (e.g. Honorton 1985).

Remote viewing experiments involve dispatching the sender to a randomly chosen location and asking them to attempt to convey the image to a distant receiver. The receiver draws and describes the location where they think the sender is. The statistical significance found in “free choice” experiments like this is much stronger than that in forced choice experiments (Targ and Harary 1984). Another series of ESP experiments that asked people to dream images related to ESP targets was also successful (Ulirnan et al 1973).

Skeptics can discount positive ESP results in less well-controlled experiments as being due to sensory leakage, inference or fraud. However, where, as is normally the case now, experimenters announce in advance that they intend to do an ESP experiment and use automated target selection, coding and judging, it is hard to write off the extraordinarily significant effects found in meta-analyses of telepathy and clairvoyance experiments as nothing more than chance.