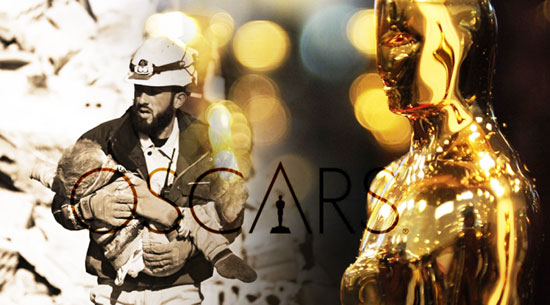 In 2017, many have expressed their shock and horror that a ‘documentary’ on the White Helmets organisation has won the Oscar for Best Documentary.

The White Helmets purports to be an aid organisation but has been widely discredited as such. What is more, the organisation has been exposed as a handsomely funded western propaganda tool. Even worse, the White Helmets have been exposed as actively supporting (both materially and in terms of PR) the criminal acts of groups like Al-Qaeda/Al-Nusra.

The Syrian government which considers the group a terrorist organisation has been totally vindicated. The UN consequently do not recognise the White Hemlets as any sort of aid agency.

Why then did the Hollywood elite honour such a dangerous group? One could say, with a great deal of truth, that the Hollywood elite are out of touch, bordering on the mad, but there was a far more devious reason behind the awarding of a terrorist group.
The truth of the matter is that the US government, typically through the CIA, has for years influenced US news media, artistic elite and Hollywood, using both willing and unwilling accomplices to propagandise a pro-deep state narrative.

In the 1950s, the young CIA didn’t waste time in this respect. The CIA’s Operation Mockingbird was a CIA initiative wherein US journalists at organisations like the New York Times and CBS were fed propaganda stories to send out to their then virtually monopolised share of American readers and viewers.

Many journalists were paid by the CIA to promote such stories. In other cases, naive journalists were simply given the information and put it out as real news, when in fact it was what today we would call ‘fake news’.

But the CIA didn’t limit their activities to media. The so-called Congress for Cultural Freedom funded artistic performances, publications and exhibitions designed to promote the CIA’s version of the ‘American way’, even though ironically, much of the work promoted was overwhelmingly rejected by Middle America.
The CIA supported all sorts of causes and art forms that many in America found anathema to traditional conservative tastes, ranging from the Abstract Expressionist movement in painting to radical feminism.

Much of the CIA’s meddling in media and creative industries was kept under wraps until the 1970s when many in Congress began questioning the modus operandi of the CIA in the aftermath of the Watergate scandal. The full extent of Operation Mockingbird was not however fully revealed until pertinent information became declassified in 2007.

Much has been reported of so-called Hollywood blacklists against real and alleged communists at the height of the McCarthy era, but little in the mainstream media has been said of the CIA’s influence on Hollywood.

In 2012, much of the CIA’s influence on Hollywood in the post Cold War era was laid bear in a book by Tricia Jenkins called The CIA in Hollywood: How the Agency Shapes Film and Television.

Whilst many thought the era of big CIA would diminish with the end of the Cold War, Jenkins’s book has demonstrated that such ties continue. The rapid expansion of the surveillance state under Presidents George W. Bush and Barack Obama and the current deep state war on alternative media, has only entrenched the position of portions of the US government in actively trying to influence the narratives that audiences often ignorantly consume.

The media-industrial complex/media-entertainment complex is not a conspiracy theory. The trail of influence and money which both directly and indirectly weighs on the content put out by Hollywood and the US mainstream media is very real. It is both historical fact and sadly it is also part of the present reality.

It is for this reason alone that no one should be surprised that Al-Qaeda’s helpers, the White Helmets won an Oscar. What still is more surprising is that many in America do not question why the terrorist organisation blamed for the 9-11 attacks is now lionised as a sound alternative to the secular government of Syria.