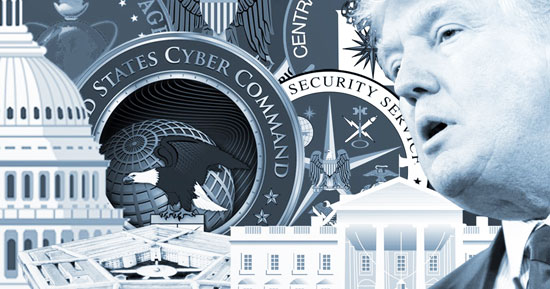 The Deep State refers to a coordinated effort by career government employees and others to influence state policy without regard for democratically elected leadership.

“Democracy is popular because of the illusion of choice and participation it provides, but when you live in a society in which most people’s knowledge of the world extends as far as sports, sitcoms, reality shows, and celebrity gossip, democracy becomes a very dangerous idea.

Until people are properly educated and informed, instead of indoctrinated to be ignorant mindless consumers, democracy is nothing more than a clever tool used by the ruling class to subjugate the rest of us.” Gavin Nascimento

When Eisenhower coined the term “Military Industrial Complex,” his main concern was the potential for the “disastrous rise of misplaced power.” After him, John F Kennedy (JFK) warned the citizenry that we are living in “a system which has conscripted vast human and material resources into the building of a tightly knit, highly efficient machine that combines military, diplomatic, intelligence, economic, scientific and political operations.”

He went on to state that “its preparations are concealed, not published. Its mistakes are buried, not headlined. Its dissenters are silenced, not praised. No expenditure is questioned, no rumor is printed, no secret is revealed.”

Before both of these two, 28th President of the United States Woodrow Wilson revealed:

“Since I entered politics, I have chiefly had men’s views confided to me privately. Some of the biggest men in the United States, in the field of commerce and manufacture, are afraid of somebody, are afraid of something. They know that there is a power somewhere so organized, so subtle, so watchful, so interlocked, so complete, so pervasive, that they had better not speak above their breath when they speak in condemnation of it.ˮ

Perhaps one of the most revealing statements from modern history by a president comes from the 26th president of the United States, Theodore Roosevelt, when he explained how little people know of how government really operates:

“Political parties exist to secure responsible government and to execute the will of the people.

From these great tasks both of the old parties have turned aside. Instead of instruments to promote the general welfare, they have become the tools of corrupt interests which use them impartially to serve their selfish purposes. Behind the ostensible government sits enthroned an invisible government owing no allegiance and acknowledging no responsibility to the people.

To destroy this invisible government, to dissolve the unholy alliance between corrupt business and corrupt politics is the first task of the statesmanship of the day.ˮ

What these presidents did, as many others have done, is reveal the existence of a government within the government that has infiltrated the United States.

It’s no secret that government policy is largely dictated by corporations, and the financial institutions that sit above them. We no longer live in a democracy, but rather, a “corporatocracy.” This is easy to see if you simply follow the money.

“As difficult as it was for me, I’ve come to an inescapable and profoundly disturbing conclusion. I believe that an elite group of people and the corporations they run have gained control over not just our energy, food supply, education, and healthcare, but over virtually every aspect of our lives; and they do it by controlling the world of finance. Not by creating more value, but by actually controlling the source of money.” Foster Gamble

Below is a great clip from the Thrive documentary that explains the modern day banking industry perfectly.

The military industrial complex, the Deep State, those who the presidents above are referring to, is comprised of a small group of people and the corporations/institutions they run. It has been this way for many years, as so many presidential candidates, like Dr. Ron Paul and Bernie Sanders, have exposed. This organized power completely controls politics, and they do not care who you vote for.

Regardless of who is elected president, this hidden power has an agenda, and they use politics to justify it. Just look at the destabilization of the Middle East.

Our perception of politicians and presidents largely comes from mainstream media, not our ability to think critically about what is going on. If mainstream media praises a candidate, like Hillary Clinton, that’s who the masses prefer. Their power to influence the minds of the masses is tremendous.

Despite the fact that Donald Trump has been vilified, he’s actually taken more action against this powerful group of elite and their interests than most, but it’s hard for people to see this because these corporations (who own the mainstream media, incidentally) continue to slander him, not that he hasn’t made it easy for them.

One great example is the terror war industry, and the presence of a supposed “Islamic Threat.” This perceived threat is maintained through false flag terrorism, a concept that even the mainstream has acknowledged, particularly since multiple politicians and academics have revealed it to the world. The globate elite use “imaginary” and “mythical” threats to push forth their agenda.

Vladimir Putin, along with many others, also called out the United States and their allies for funding terrorists organizations.

The term “terror war industry” comes from FBI whistleblower Sibel Edmonds, who referenced it during an appearance on RT news. She is a former FBI translator and the founder of the National Security Whistleblowers Coalition (NSWBC). She gained a lot of attention in 2002 after she accused a colleague of covering up illicit activity involving Turkish nationals, which included serious security breaches and cover-ups, alluding to intelligence that was deliberately suppressed.

The Deep State institutions involved with this would be the arms industry and the oil industry, among others.

Henry Ford said that, “It is well enough that people of the nation do not understand our banking and monetary system, for if they did, I believe there would be a revolution before tomorrow morning.”

No matter who you vote for, the banking system doesn’t change. These people have the ability to print money in a way that keeps them protected, and bleeds everybody else dry. As the quote above from Alan Greenspan illustrates, it’s an independent agency that can make decisions no other branches of government can oppose.

The people that control the money control the government, and the presidency. If an institution like the federal reserve isn’t considered a deep state institution, what else is?

Every four years we look to somebody to spark change, but perhaps that whole process is meant to distract us. Perhaps we are looking in the wrong places.

The military industrial complex is huge, and full of private contractors, intelligence agencies, and other defence agencies that have, just as Eisenhower warned us, amassed a great deal of power. The crazy thing about it is, nobody knows what’s going on in here, not even the President.

If the President and the United States Congress doesn’t even have access to this information, just ask yourself, who does?

We’re talking about Special Access Programs (SAPs), in which we have unacknowledged and waived SAPs. These programs do not exist publicly, but they do indeed exist. They are better known as “Deep Black programs.”

A 1997 US Senate report described them as “so sensitive that they are exempt from standard reporting requirements to the Congress.” Welcome to the world of secrecy.

These programs don’t change, regardless of who you vote for. These are the institutions, agencies, and ongoing programs that are above the law, beyond scrutiny, and operating in near total secrecy.

Business Insider reports that the U.S. intelligence community consists of 17 discreet agencies that operate with enormous budgets and incredible secrecy, bringing total surveillance and total information awareness to bear on the people of Earth.

The United States has a history of government agencies existing in secret for years. The National Security Agency (NSA) was founded in 1952, its existence was hidden until the mid 1960’s. Even more secretive is the National Reconnaissance Office, which was founded in 1960 but remained completely secret for 30 years.

If Voting Doesn’t Make A Difference, What Will?

“This is the way the system works, it’s a rotten system, and I see elections as so much of a charade. So much deceit goes on. Whether it’s a Republican or a Democrat president, the people who want to keep the status quo seems to have their finger in the pot and can control things.

They just get so nervous so, if they have an independent thinker out there, whether it’s Sanders, or Trump, or Ron Paul, they’re going to be very desperate to try to change things. More people are discovering that the system is all rigged, and that voting is just pacification for the voters and it really doesn’t count.” Dr. Ron Paul, three time presidential candidate.

Voting is simply the illusion of choice. As former New York City Mayor John F. Hylan stated:
“The real menace of our Republic is the invisible government, which like a giant octopus sprawls its slimy legs over our cities, states and nation. The little coterie of powerful international bankers virtually run the United States government for their own selfish purposes. They practically control both parties.ˮ

These Deep State institutions have been in place for a long time, and remain in place regardless of who votes. So what changes things? Let’s take a look at some examples. Take Genetically Modified Foods, for instance, an issue for which activism and awareness alone have created groundbreaking change. One example would be the fact that a federal lawsuit forced the U.S. government to share disturbing facts about genetically engineered foods. You can read more about that here.

As a result, a number of countries have since completely banned GMOs and the pesticides that go with them. This is where change comes from: us, not them. If we constantly look to one person, who is usually part of the “1 percent,” to make significant changes, nothing will ever change.

Politics seems like one big distraction, a place for powerful people to play games with the population and keep our attention. It’s become more of an entertainment platform as opposed to a real platform for change.

But there is a massive shift in consciousness occurring. The veil that blinds the masses in so many ways is becoming transparent. Our thoughts and feelings about our world are changing, and as a result, we are beginning to manifest a new world. We are definitely living in a time where new information and evidence will conflict with long-held belief systems.

Seeing through this Deep State and the institutions that really call the shots is a key step. We must create more awareness of these issues and speak up about them instead of just giving all of our power over to one individual, hoping that they can make some sort of change for us. We have to do it.

What’s Happening In The Brains of Autistic Children, According To The ‘Edgar Cayce of our Time’