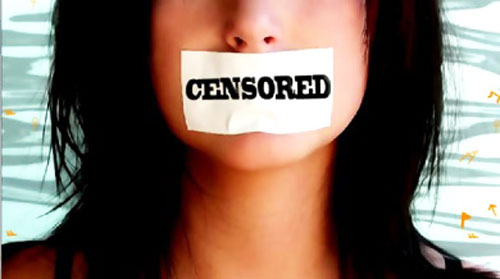 Some people need reminding that the principled 1stAmendment was written to allow the flow of free speech without government interference. The 1stAmendment allows a person in the minority to say what they want while protecting them from the opposing majority. What we’re witnessing today on unprecedented levels is the denial of our self-expression through a number of uncompromising authorities taking away our right to free speech. Consequentially, we’re facing a crisis where citizens’ ability to think for themselves, communicate opinions or disagreement is seriously under threat.

The growing tyranny of free speech suppression can be found:

Yes, get them at an early age so that they can be under the ruling thumb with ludicrous, moronic prohibitions and zero tolerance policies making the schoolchildren too scared to say anything for the rest of their lives.

For example, I’m told that schoolchildren in some schools cannot say certain words like, for instance, gun (now referred to as “the G-word”). How will this growing word embargo affect the ability to communicate education clearly?

Hoards of politically correct weasels and control freaks have been allowed to run amok on citizens of all ages enforcing their petty word characterisations.

Here are just a couple of examples:
– Some UK Hospital staffs have been severely ticked off for stigmatizing patients: To avoid the so-called stigmatizing “out-patients” must be called “clients”.
– Music teachers have been told that pupils cannot teach the song “Baa Baa Black Sheep”. In line with political correctness it must be called “Baa Baa Happy Sheep!”

Besides political correctness citizens are getting reported for a number of speech categorizations considered to make someone feel uncomfortable, unsafe or cause offence.

College campuses are known to be the hotbed for this. Besides encouraging the snitch-community students could be reporting each other for “trigger warning”, “micro-aggression” and “red light” speech categorizations. In schools, besides hateful speech, offending; ethnic origin, sexual orientation, disability, religion, teasing is now considered to be bullying. Bullying is deemed by authorities as tomorrow’s hate crime.

Bearing in mind the effects they have on government policy, besides Google, for some time, social media giants such as Facebook and Twitter have been at work on what speech needs online censoring. Taking the case where you’re not approved, deemed by these corporations as “anti-government speech”, then you will be deleted on the basis of “extremism”.

The consequences of the suppression of free speech

3. Creates limited choices
Language and thought creates our reality and when greatly restricted our choices will in turn be based on limited or even false paradigms.

4. Breeds “unhealthy scepticism”
Typical of a totalitarian scenario, adhering to the establishment’s growing suppression leads to what I call unhealthy scepticism where more and more people will become fixed, rigid and dogmatic in their beliefs. Instead of investigating, anyone seeing outside of the limited viewpoint will be ignored, ridiculed or rejected, labelled as someone to be “sceptical” about.

5. Encourages intolerance
We’ve seen a number of circumstances where dissent and public opinion has been demonised unjustly. Aren’t the authorities the real extremists or bullies?

6. Easier to whitewash
If speech is under the control of corporations such as the social media giants (or any other mainstream media outlet) acting on government policy then it makes it easier to manipulate the general consensus, even to the point of whitewashing dubious or criminal activities.

7. Bottling up effect
The bottling up of free speech could lead to violence, rioting on the streets through frustration in the want to take action.

What you can do?
Don’t become unquestioning compliant docile sheep. Don’t live your life muzzled, glued to the TV. Don’t let the pillar of public apathy keep the suppression of free speech propped up and standing.

The solution is to confront. More people need to muster enough courage to speak out on what isn’t being said than ever before. Confront those politically correct weasels. Confront any control freak with ulterior motives to shut people up.

Boycott the social media giants. There are a growing number of other social media outlets dedicated to alternative view communities where you’d be better off spending your time.

We have to stand in the gap, maintain our constitutional right to hold up a protest sign, preserve public opinion, whatever it takes to protect our freedom of free speech.